Financial Challenges for the Next Chicago Mayor and City Council

The Civic Federation released this report in advance of the April 2, 2019 Chicago municipal election for consideration by the public and candidates for Mayor, Treasurer, Aldermanic Office and the City Clerk. The report details the City of Chicago’s major financial challenges, as well as options and recommendations to stabilize the City’s financial position.

Addressing these urgent fiscal needs will crowd out spending for other desired goods or services absent enormous tax increases, state financial assistance and/or massive new borrowing efforts. Unfortunately, there is little or no money for new programs without the infusion of vast new revenues or deep spending cuts. The fiscal challenge will be especially daunting because of the possibility of an economic recession in the near future. Unfortunately, the City and the State of Illinois are not adequately prepared for the budgetary impact of a recession, particularly if it is deep or long lasting.[1]

The purpose of this report is twofold:

It is important to note that many of the ideas presented in this report will require approval of legislation by the Illinois General Assembly and the Governor. This is appropriate as the State of Illinois created or contributed to many of the problems faced by the City of Chicago, such as pension funding shortfalls and a lack of capital funding. In addition, many proposals, if accepted, might have to be implemented in stages due to the enormity of the City’s fiscal challenges.

Chicago faces a number of social, economic and financial problems in addition to the three key fiscal issues identified above. These include:

While acknowledging their importance, this report will not address these other critical problems. There are many other organizations in Chicago and Illinois that focus their research efforts on these issues. These organizations are listed in the appendix of this report.

This section of the report describes the three major fiscal challenges facing the next Mayor of Chicago and the incoming City Council. While these issues took many years to develop, they must begin to be addressed in the next few years to stabilize the City’s finances. It will not be an easy task and will require significant local political will and assistance from the Illinois General Assembly and Governor.

The City of Chicago’s four pension funds combined have nearly $28 billion in unfunded pension liabilities. The following exhibit shows actuarial value funded ratios for each of the four pension funds. The actuarial value funded ratios for all four City pension funds decreased or were flat in FY2017, the last year for which complete data are available. The Fire Fund decreased to 20.1%, the Police Fund was flat at 23.7%, the Municipal Fund decreased significantly to 27.4% and the Laborers’ Fund declined to 48.3%. A low and falling funded ratio is cause for serious concern as it raises questions about the ability of the government to adequately fund its retirement systems over time. 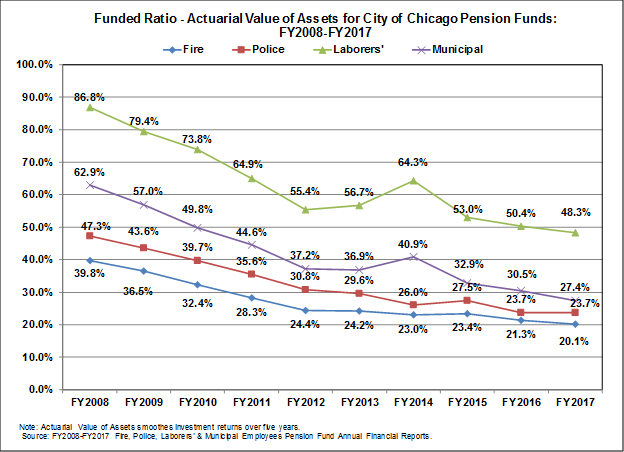 To address the precarious financial position of its pension funds, the City secured state legislation in 2016 for the Police and Fire funds and in 2017 for the Municipal and Laborers’ Funds implementing new 40-year pension funding schedules. The funding schedule provides for five years of increasing payments laid out specifically in the state statute, leading to an actuarially-calculated payment schedule with a 90% funding goal for the subsequent 35 years.

Chicago has implemented reliable funding streams that provide sufficient funding for the first years of the funding plan for each pension fund. This includes $543 million in property tax increases, approximately $174.1 million in new water and sewer utility taxes[2] and approximately $147.1 million from a 911 surcharge on telephones, which frees up corporate fund revenue to fund pension contributions to the Laborers’ Fund. However, by FY2023, the City will need at least $1.2 billion in additional recurring revenues to finance the upcoming pension funding ramp, according to the City’s FY2018 Annual Financial Analysis. Unfortunately, even these enormous infusions of revenues will not fully fund the pensions.

The City has to date released no detailed plan for how it will afford a projected doubling of its contributions to the pensions over the next five years due to the transition to actuarially-based funding other than floating the possibility of issuing $10 billion in pension obligation bonds.[3] Funding City pensions is the single most pressing fiscal issue Chicago faces. The next Mayor and City Council must address it as soon as possible.

A structurally balanced budget is one in which recurring revenues equal or exceed recurring expenditures. It provides financial stability for a government in the long-term.[4] A budget that is not structurally balanced is one which is balanced through the use of one-time revenues such as fund balance, asset lease proceeds or borrowing. Using non-recurring, one-time revenues to repeatedly fund budgets masks serious systemic financial problems and is not a sustainable practice.

The City of Chicago unfortunately continues to have a chronic structural budget deficit. In its Annual Financial Analysis 2018 released in July 2018, the City of Chicago projected that without changes to expenditures and revenues, its Corporate Fund deficit, which does not include most pension contributions, would be $97.9 million in FY2019, $251.7 million in FY2020 and $362.2 million in FY2021.[5] However, these projected gaps do not include the required increased contributions to the Police and Fire Funds, which will need to be funded on an actuarial basis in property tax levy year 2020.[6] The City has been forced to repeatedly close its annual budget gap with one-time revenue sources, such as tax increment financing (TIF) surpluses.

Chicago has made considerable efforts to reform its operations through management efficiencies and innovative programs in the past six years and has significantly reduced its operating deficit, which was as high as $790.7 million in FY2014.[7] It has also dramatically reduced its reliance on one-time revenue sources from years past, particularly ending the deleterious practice of raiding long-term asset lease reserves. However, the imbalance between operating expenditures and recurring revenue sources is projected to continue to grow absent action to reduce expenditures or increase revenues. The continued practice of using significant one-time revenue sources, especially fund balance and TIF surplus, only exacerbates the ongoing structural deficit and leaves the City particularly vulnerable in the event of unexpected costs or an economic recession.

The City of Chicago has a relatively high debt burden according to three commonly-used fiscal indicators: 1) amount of total net direct debt, 2) long-term direct debt per capita and 3) debt service appropriations. The large and steady upward trend in debt over time is a cause for great concern for the City of Chicago. It threatens to further reduce the City’s credit rating, make future borrowing more expensive, possibly limit available capacity for additional borrowing and crowd out spending on other important priorities.

Between FY2008 and FY2017, the last year for which complete information is available from the City’s audited financial statements, Chicago’s total net direct debt rose by 56.9%, or $3.5 billion. This represents an increase from $6.1 billion in FY2008 to $9.6 billion ten years later. 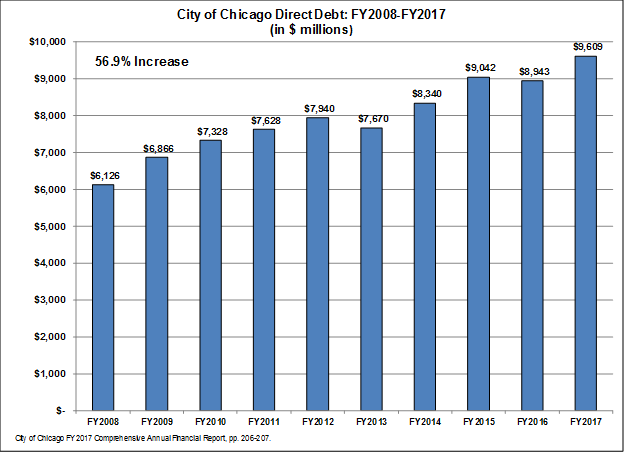 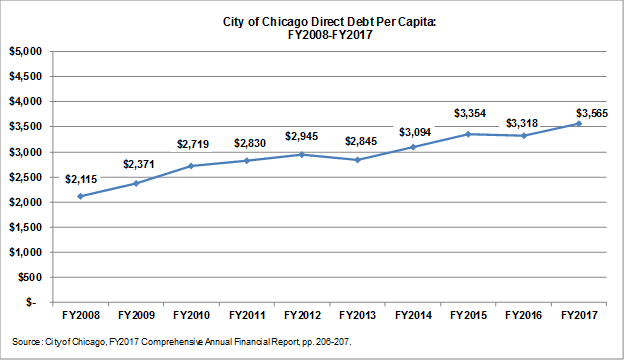 In addition, the City approved $4 billion in debt funding to date for its multi-year O’Hare 21 modernization plan and has not indicated how much of the remaining plan costs will be funded through borrowing. While O’Hare debt is a different type from the City’s direct debt, if the entire O’Hare plan is debt funded, the airport’s total debt outstanding would be $14.5 billion by 2022, with the possibility of even more debt if the airlines promote additional projects. Moody’s Investors Service has critiqued the O’Hare 21 funding plan because “it will increase leverage and airline costs above those of the airport’s peers, weakening O’Hare’s competitive position and airlines’ profitability at the airport if growth fails to materialize.”[9]

The upward trend in debt burden over time is not projected to end soon. It is a serious cause for concern for the City of Chicago. A high debt burden combined with the City’s other enormous long-term liabilities, particularly pensions, will continue to put pressure on the budget and constrain the City’s finances.

Summary of Financial Management Options for the City of Chicago

The various financial management options for the City of Chicago discussed in this report are listed below. The accompanying table indicates whether each option would require authorization by the State of Illinois through legislation or if the City can implement them using its existing home rule authority. The Civic Federation takes no position on these options and takes no position on them in this report in order to advance candidates’ and residents’ discussions of Chicago’s financial future. The Federation does not support tax increases in the abstract. Furthermore, the Federation believes that any new taxes or increases to existing taxes would need to be tied to a long-term financial plan that balances the City’s budget and stabilizes its finances over the long-term. 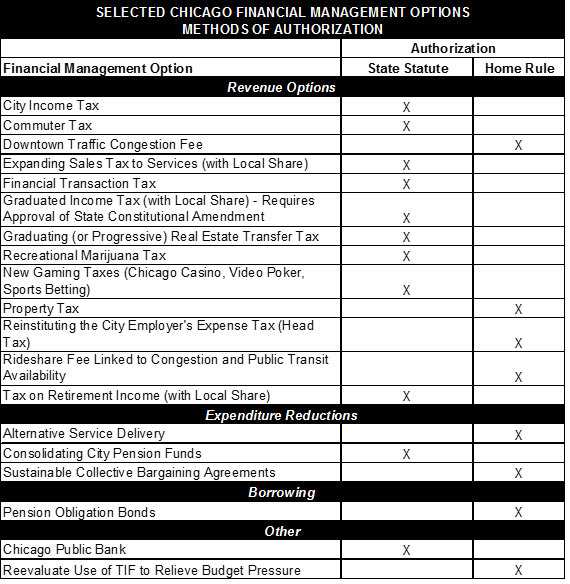 Below is a list of major structural and process reform recommendations that the Civic Federation has endorsed in public statements, including annual analyses of the City of Chicago budget.

In sum, the City of Chicago faces a number of serious financial challenges in the next few years. Many of the potential solutions to these problems will be politically difficult and require the incoming Mayor and City Council to make very tough decisions. It is important to note that many of these will also require approval from the Illinois General Assembly and Governor.

The following sections of this report outline some of the revenue enhancement, expenditure reduction and borrowing options that City leaders may explore in order to address these problems. The report concludes with structural and process recommendations the Civic Federation has long proposed to improve financial and policy transparency in City of Chicago operations.

[1] The State of Illinois Budget Office reported in late 2018 that pessimistic forecasts it utilizes predict a possible recession from the fourth quarter of 2019 to the second quarter of 2020. See State of Illinois, Governor’s Office of Management and Budget, Illinois Economic and Fiscal Policy Report, November 15, 2018, pp. 1-5, https://www2.illinois.gov/sites/budget/Documents/Economic%20and%20Fiscal%20Policy%20Reports/FY%202018/Economic-and-Fiscal-Policy-Report-FY19.pdf (last accessed February 12, 2019). The Commission on Government Forecasting and Accountability also noted in a February 2019 report prepared by Moody’s Analytics that Illinois’s ongoing negative financial situation and continued population losses are threats to the State’s future economic outlook. See Commission on Government Forecasting and Accountability, State of Illinois Economic Forecast February 2019, p. 13, http://cgfa.ilga.gov/Upload/2019MoodysEconomyILForecast.pdf.

[2] While the City projects that it will generate $174.1 million from the water and sewer utility tax in FY2019, $50 million will not be used to make the FY2019 pension contribution, but rather will be set aside in escrow to help make future years’ contributions. See City of Chicago, FY2019 Budget Overview, p. 40.