The criminal justice system in Illinois is comprised of a multitude of different agencies and systems. This blog post will focus on the departments that make up the key criminal justice system agencies within Chicago and the State of Illinois, including agencies from three levels of government: municipal (City of Chicago), county (Cook County) and state (the State of Illinois).

Each agency plays a role in the criminal legal system, although many criminal justice system agencies are interconnected or overlap one another. For example, the State, County and City of Chicago each have police departments that can make an arrest. After an arrest is made, the Cook County Circuit Court adjudicates the criminal case. While a criminal case is pending a defendant might be detained in the Cook County Jail or ordered to electronic monitoring under supervision of the Sheriff, or ordered to other forms of pretrial monitoring overseen by the Circuit Court. Upon conviction, a person could be incarcerated in an Illinois Department of Corrections facility or released on probation, which is overseen by the County.

Because the focus of this blog is on the criminal justice system, some other government agencies that would fall under the umbrella of public safety functions (such as fire protection or homeland security) and social services funded by non-criminal justice departments (such as mental health, substance abuse or violence prevention) are excluded.

Figures presented are for the fiscal year 2022 adopted budgets of each government entity: the State of Illinois, Cook County and City of Chicago.[1]

The City of Chicago’s criminal justice system as defined in this blog post primarily includes the Chicago Police Department (CPD), as well as 3 oversight agencies: the Civilian Office of Police Accountability (COPA), the Community Commission for Public Safety and Accountability, and the Chicago Police Board (CPB). COPA receives and investigates civilian complaints regarding police officers. The Police Board makes decisions in matters involving police misconduct and discipline brought to the Board by COPA or the Police Superintendent. The Community Commission for Public Safety and Accountability is a newly-created office tasked with providing community input to CPD and the other CPD oversight agencies.

Other public safety functions provided by the City of Chicago are excluded from this analysis, including the Chicago Fire Department, Office of Emergency Management and Communications and the Office of Public Safety Administration, because these functions are not central to the criminal legal system.

The table below shows the FY2022 adopted budgets for CPD and the three police oversight agencies. Together, these agencies’ adopted spending levels total $1.77 billion. This level of spending represents nearly 17% of the total City of Chicago operating budget of $10.6 billion. 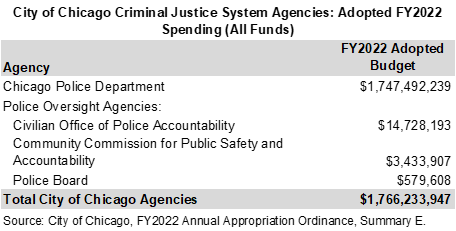 The Cook County criminal justice system is made up of the following six agencies: Office of the Chief Judge, Clerk of the Circuit Court, Sheriff’s Office, State’s Attorney’s Office, Office of the Public Defender, and the Justice Advisory Council. The Chief Judge oversees the Cook County Circuit Court, including the Juvenile Temporary Detention Center, probation, and pretrial services. The Clerk of the Circuit Court is responsible for maintaining all court files and recording court proceedings and determinations, as well as collecting fines and fees. The Sheriff’s Office operates the Cook County Jail[2] and electronic monitoring program, provides security for all court facilities, and provides police services to unincorporated areas of Cook County and some parts of the City of Chicago through the Sheriff’s Police Department. The State’s Attorney’s office handles the prosecution of misdemeanors and felonies filed in Cook County, enforcement of child support orders, protecting consumers and the elderly, assisting victims of domestic violence, and providing legal counsel for the government of Cook County. The Office of the Public Defender provides legal services for clients unable to pay for private litigation in pending criminal, child protection, and delinquency matters. The Justice Advisory Council oversees the County Board President’s criminal justice reform initiatives and administers grant funding to community organizations in the area of violence prevention, reduction and other related services. 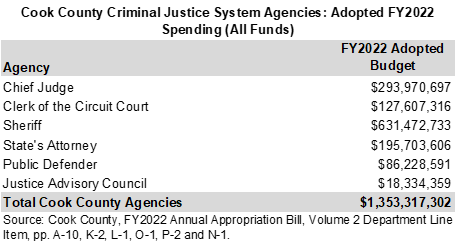 Criminal Justice System agencies overseen by the State of Illinois include:

The adopted budgets for each of these agencies in the FY2022 State of Illinois Enacted Budget are shown in the table below. Together, these State agencies’ spending totaled $3.59 billion in FY2022. The Illinois Department of Corrections represents the largest State agency with the highest level of spending at nearly $1.8 billion. The adopted FY2022 budgets of these agencies combined represents 3.2% of the entire State of Illinois operating budget of $110.9 billion across all funds (including general funds, other State funds and federal funds). 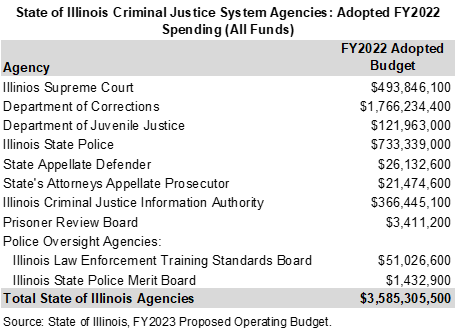 Total budgeted spending among all of the criminal justice agencies that impact Chicago was $6.7 billion in FY2022. The chart below shows the relation between each level of government’s adopted FY2022 budgets. 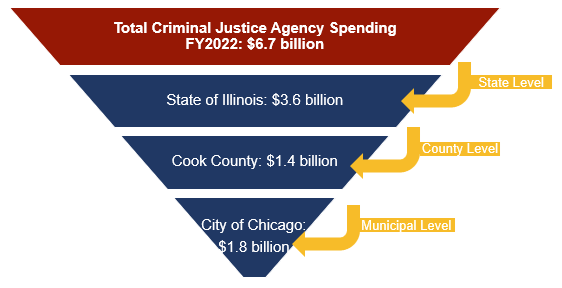 The State of Illinois had the largest budget of $3.6 billion. While the next level of government, Cook County, serves a larger population and geographic area than the City of Chicago, the County had the lowest budget at $1.4 billion. At the municipal level, the City of Chicago’s police budget alone surpasses all of Cook County’s criminal justice spending. City of Chicago spending totaled $1.8 billion. The chart below presents each of these governments’ budget levels in relation to total criminal justice spending. 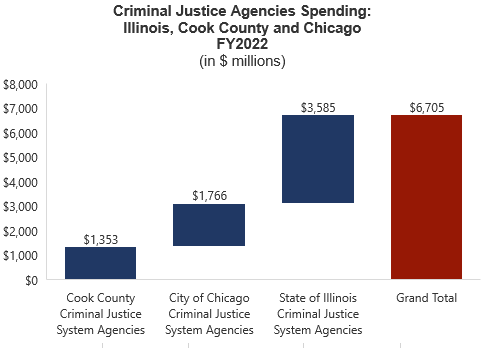 The following chart presents criminal justice spending among the Chicago, Cook County and State of Illinois agencies by function in FY2022. Law enforcement across all three levels of government is the largest overall expense, totaling $2.56 billion in combined spending across Illinois State Police, Chicago Police Department and the Cook County Sheriff’s Police Department. The second largest expense is on correctional facilities and related programs, with a combined budget of $2.45 billion. The State of Illinois allocates the majority of its criminal justice system budget, approximately 50%, to correctional facilities, followed by State Police and the Illinois Supreme Court as the next two largest areas of State-level spending. Corrections includes the Illinois Department of Corrections, Department of Juvenile Justice, Cook County Sheriff’s Office which operates the Cook County Jail, and the Prisoner Review Board. Law enforcement oversight agencies’ budgets total $71 million, while other grant-making and research agencies (ICJIA and the Cook County Justice Advisory Council) account for $456 million.  Court related spending on the Illinois Supreme Court, Cook County Circuit Court and related legal services (state’s attorneys and public defenders) totals $1.25 billion. 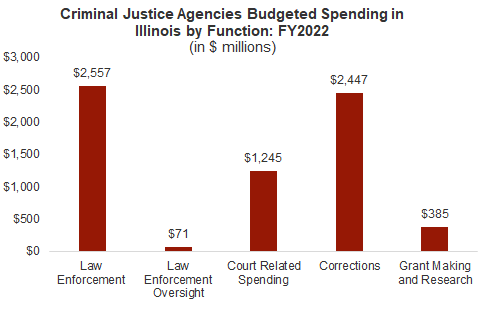 For more information on criminal justice and public safety spending in Illinois, see the Civic Federation’s related research on this topic at the following links:

State of Illinois Collected $1.9 Billion in Gaming Revenue in FY2022

The Commission on Governmental Forecasting and Accountability (COGFA) has released a new report on gaming in Illinois. The report provides a comprehensive look at all forms of legally sanctioned wagering in the...

It is conventional wisdom that taxpayers in Illinois pay some of the highest property taxes in the nation. That assertion is borne out in a report released last week by the Tax Foundation. The...

This blog post examines the Chicago Public Schools’ contributions to the Chicago Teachers’ Pension Fund in the FY2023 budget and the funding status of the Pension Fund based on financial health indicators. Additional descriptive...

State of Illinois Collected $1.9 Billion in Gaming Revenue in FY2022

The Commission on Governmental Forecasting and Accountability (COGFA) has released a new report on gaming in Illinois. The report provides a comprehensive look at all forms of legally sanctioned wagering in the...

It is conventional wisdom that taxpayers in Illinois pay some of the highest property taxes in the nation. That assertion is borne out in a report released last week by the Tax Foundation. The...