A report recently released by the Civic Federation highlights the current processes in Cook County bond court, including how often judges require payment of money as a condition of bail. The study, conducted in partnership with the League of Women Voters of Cook County, found that despite narratives to the contrary, cash bail is still widely used in Cook County. Another report recently released by the Illinois Network for Pretrial Justice examined the bond court processes of six other Illinois counties, which provides comparisons of the use of cash bail between these counties. Based on the data from both reports, there are wide variances in the use of cash bail across the State of Illinois.

How often is cash bail used?

The following chart presents the distribution of D-Bonds compared to other bond order types based on the top charges among the Civic Federation’s sample of cases observed in Cook County. Cash bail was used in the majority of cases involving certain charges, such as aggravated battery and gun possession, but it was ordered less frequently in cases involving drug possession and drug sales. 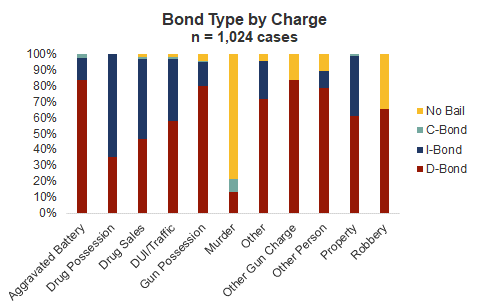 The Civic Federation’s findings are in line with data dashboards produced by the Office of the Chief Judge of Cook County. A policy enacted by the Cook County Chief Judge in 2017 created a presumption toward non-monetary pretrial release and affordable bonds. Following the 2017 policy, the number of D-Bonds dropped while the number of people ordered to be released without paying money increased. However, there has been a shift back toward the use of money as a condition of bail in the majority of cases. This shift began to occur in the second quarter of 2020.

A report released this week by the Illinois Network for Pretrial Justice sheds further light on the use of cash bail in six other counties: Champaign, DuPage, Kane, McLean, Sangamon and Winnebago Counties. In two of these counties—Champaign and Kane—cash bail is ordered in less than a third of cases, whereas cash bail was ordered in 83.2% of cases in DuPage County. McLean and Winnebago Counties saw cash bail ordered in just under half of the cases observed. Only Sangamon County is comparable to Cook County, with 66.7% of the cases observed ordered to pay a cash bond. 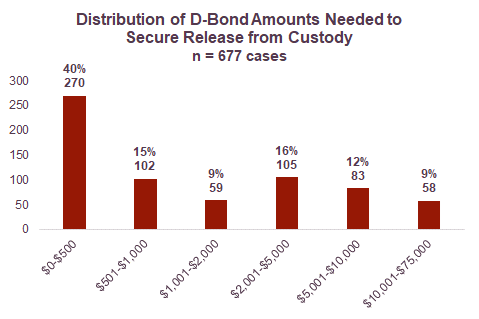 There are also inconsistencies in the dollar amounts ordered for pretrial release across Illinois. Based on the Illinois Network for Pretrial Justice study, the median dollar amount needed to secure release from custody of $1,000 in Cook County is in line with some other counties. Champaign County also had a median of $1,000, and DuPage County’s median bond payment amount was $750. However, Champaign County’s median bond amount needed for release from custody was much higher at $5,000. The following chart from the Illinois Network for Pretrial Justice report shows the median bond amounts needed to post for release across the six counties included in the study. 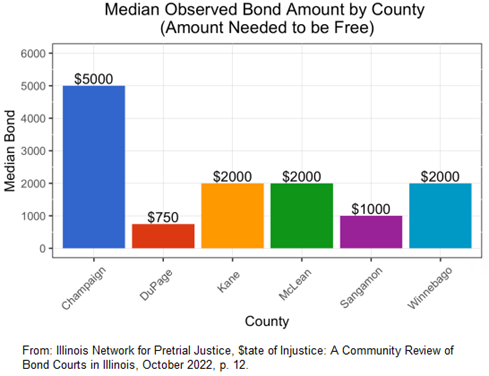 These differences in D-Bond amounts point to the lack of uniformity in the way cash bail is used. While cash bail was ordered in just 28% of cases in Champaign County, the median dollar amount needed for release in Champaign County was far higher than the other counties.  DuPage County’s orders for cash bail showed the opposite: cash bail was ordered in the vast majority of cases, 83.2%, but the median dollar amount needed to post for release was the lowest out of all the counties at $750.

How many people ordered to pay cash bail are actually released?

As noted in an Op-Ed in the Chicago Tribune this week by Michelle Alexander and John Legend that cited Civic Federation research, cash bail has been the norm, not just in Illinois but nationwide, without evidence that it is effective at keeping communities safe. Research from the Loyola University Center for Criminal Justice finds that cash bail leads to larger numbers of people being released into the community and less pretrial detention than is generally assumed. In the three-year period from 2017-2019 prior to the COVID-19 pandemic, only 19% of people charged with felonies and awaiting trial statewide were held in jail. Another 17% were released from jail on electronic monitoring or pretrial supervision, and 64% were released without any supervision. Cook County was among the courts that held higher percentages of pretrial defendants in jail at 24% during that period. Only three circuit courts held more people charged with felonies in jail than the Cook County Circuit Court: the 10th judicial circuit (including Peoria and surrounding counties) held 28% of defendants in jail; the 13th circuit (consisting Bureau, LaSalle and Grundy Counties) held 30% of defendants in jail; and the 21st circuit (Kankakee and Iroquois Counties) held 36% of defendants in jail.

More recent data from the Cook County Circuit Court shows that 66.7% of the people charged with felonies in Cook County and ordered to pay a D-Bond between April and June 2022 were able to post bond and were released from custody.[1] Overall, 70.9% of all defendants who appeared in bond court on felony charges during that three-month time period, regardless of the bond type ordered, were released from custody.

How will bail decisions change after cash bail is eliminated?

The elimination of cash bail in Illinois beginning in January 2023 will reshape the way bond hearings are held in counites throughout the State, and could potentially change the number of people who are held in jail or released pretrial and the types of charges. However, it is not yet fully known how the change will impact the number of people detained or released pretrial.

Another Loyola University Center for Criminal Justice study attempts to estimate the potential impact that the new pretrial detention standards could have on the number of people detained and released throughout Illinois based on the number of people arrested on charges eligible for detention under the Pretrial Fairness Act. The study found that in the two-year period from 2020-2021, 44% of all arrests in Illinois were for charges potentially detainable pursuant to the Pretrial Fairness Act. The remaining 56% of arrests were for offenses that will be ineligible for detention. The majority of detainable offenses under the public safety standard, 70%, were for domestic violence offenses or violations of an order of protection. The analysis estimates that as few as 15,500 or as many as 70,000 individuals in Illinois could be detained once the new law takes effect. This will largely depend on whether defendants are found to be a risk to public safety or a flight risk by the judge.

Ongoing data will be critical to measure the impact of the new law once it goes into effect. As the first State to legislatively end cash bail, observers nationwide will be looking to Illinois as a model. The Civic Federation calls on court leaders and government officials to release information to help researchers and members of the general public understand how new pretrial processes are impacting criminal defendants, court outcomes and community safety.

[1] Based on the Circuit Court of Cook County Model Bond Court Dashboard for the second quarter 2022 (April-June 2022), 4,465 people who appeared in bond court were charged with a felony during that three-month period. Of those, 2,829 were ordered to pay a D-Bond (this includes D-Bonds both with and without electronic monitoring as an additional condition of release). Of the number ordered to pay a D-Bond, 1,887 people, or 66.7%, were released from custody during that same time period.