From Budget Forecast to Budget Proposal: Changes to the City’s Revenue Projections

On November 7, 2022, the Chicago City Council voted to pass the Mayor’s proposed FY2023 budget of $16.4 billion. The FY2023 Proposed Budget was released in October 2022 and included a significant increase in projected revenue for both FY2023 and FY2022 from the annual Budget Forecast released two months prior in August 2022. This blog post will explore the differences in the projections between the Forecast and the FY2023 budget proposal. The Civic Federation’s full analysis of the proposed FY2023 Chicago budget is available here.

What Is Chicago’s Annual Budget Forecast?

The City of Chicago’s annual budget forecast was released in August pursuant to Executive Order No. 2019-3. The forecast includes a general economic outlook, year-end estimates of current year revenues and expenditures, a three-year forecast, a summary of reported pension liabilities, an overview of the Tax Increment Financing (TIF) program, the property tax levy, a summary of outstanding debt and an analysis of reserves.

Another function of the forecast is to show the projected budget gap for the next fiscal year that the City must close with its proposed budget actions. State law requires that the City of Chicago produce an annual balanced budget for each fiscal year, which begins on January 1. For the Civic Federation’s analysis of the FY2023 Budget Forecast document, see this blog post.

The FY2023 Budget Forecast focuses on the City’s Corporate Fund, which accounts for the City’s basic services and has historically experienced the largest disparity between revenues and expenditures.

The Forecast projected the Corporate Fund to end 2022 with budgeted revenue exceeding expenses by $134.0 million due to improving revenue projections and expected cost savings.[1] However, the estimates contained in the FY2023 Proposed Budget increased 2022 year-end revenue above the amounts contained in the Forecast. The FY2023 Proposed Budget projects the 2022 Corporate Fund revenues to be $5.2 billion, which is an increase of $212.9 million, or 4.3%, from the estimated $4.9 billion included in the FY2023 Budget Forecast in August of 2022.The FY2023 Proposed Budget also projects that the 2022 Corporate Fund expenditures will total $4.89 billion, which is an increase of $49.5 million, or 1.0%, above the FY2023 Budget Forecast total of $4.85 billion. The increase in expenditures is due to personnel services expenses in areas such as overtime.[2] The chart below shows the differences between 2022 year-end revenue estimates in August and October. 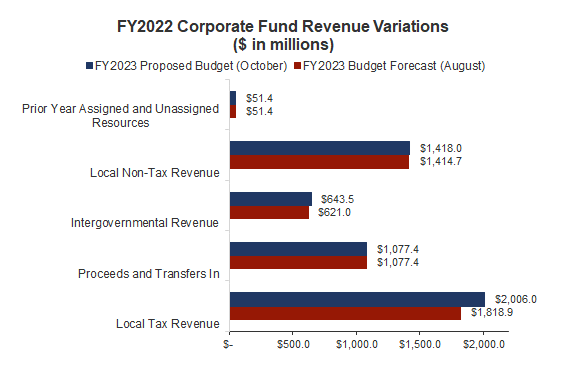 The FY2023 Budget Forecast projected 2022 to end with $1.8 billion in local tax revenue, an increase of 8.6%, or $152.8 million, over the amount budgeted for when the 2022 budget was approved in November 2021. The City attributed the increase mostly to better-than-expected performance in the amusement tax, as well as higher-than-expected personal property replacement tax revenue transferred from the State of Illinois.

The FY2023 Proposed Budget released in October also projects higher Local Tax Revenue, Intergovernmental Revenue and Local Non-Tax Revenue than anticipated in the August Budget Forecast for year-end 2022. The year-end projection for local tax revenue increased by $187.1 million, or 10.3%, from $1.8 billion to $2.0 billion, which is likely due to the continuation of trends identified in the Budget Forecast related to the performance of transaction, transportation and recreation taxes.[3] Intergovernmental revenue will increase by $22.5 million, or 3.6%, over the August projection to total $643.5 million, due to the continued strong performance of State of Illinois Income Tax as well as Personal Property Replacement Tax (PPRT), which is a corporate income tax.[4]

The following chart shows how FY2023 revenue projections changed from the FY2023 Budget Forecast in August compared to the FY2023 Proposed Budget released in October. The FY2023 Budget Forecast projected 2023 revenues to be $5.0 billion, with a 2023 projected Corporate Fund gap between revenues and expenditures of $127.9 million. The $5.0 billion total is a 2.0%, or $100.3 million, increase from the 2022 Amended Budget passed in November 2021.[5] The FY2023 Proposed Budget shows increases to projected Corporate Fund revenues of $434.1 million, or 8.7%, from the August Budget Forecast, for a total of $5.4 billion. It is important to note that the total increases from the August Budget Forecast include actions to close the budget gap that were proposed as part of the FY2023 budget, such as increasing TIF surplus, enhanced revenue enforcement and fund sweeps, as well as $260 million in improved revenue projections. 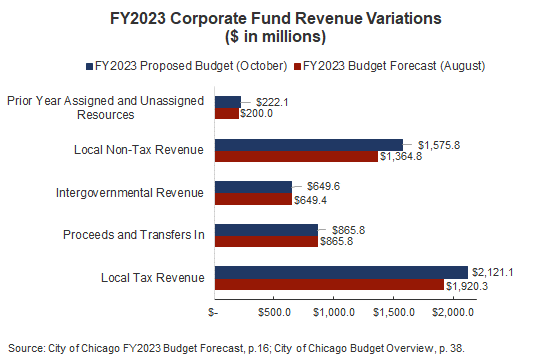 Local non-tax revenue will increase to $1.6 billion, up $211.0 million, or 15.5%, from August’s forecasted $1.4 billion, but the increase is not mostly due to improved revenue projections. Non-tax revenue increased via a number of actions the City took to balance its FY2023 budget, including declaring a larger-than-expected TIF surplus and fund sweeps. The FY2023 proposed budget also attributes the increase to charges for services, particularly reimbursements for emergency transportation services. Additionally, the proposed budget increased the use of prior-year assigned and unassigned resources by $22.1 million, for a total of $222.1 million drawn from the City’s available fund balance.[7]

The Civic Federation will continue to monitor updates to the City of Chicago’s FY2022 and FY2023 revenue projections, as the 2022 fiscal year comes to an end on December 31st and the 2023 fiscal year begins on January 1st.