This blog post provides a high-level overview of personnel within the Chicago Police Department (CPD). The information presented includes both budgeted data based on the City of Chicago’s annual FY2022 budget and active, assigned sworn officer data based on public safety data dashboards available on the Office of Inspector General website.

The Chicago Police Department has a total of 14,058 personnel positions budgeted across all funds in FY2022, including both sworn officers and civilian employees. This total includes:

The majority of positions budgeted within the Chicago Police Department are sworn officer positions. In FY2022, the City budgeted for 13,108 sworn officer positions across all funds and all job classifications (including police officers and supervisor-level positions).[1] The CPD budget includes 950 non-sworn positions. Therefore, 93.2% of the Police Department budgeted positions are sworn personnel, while 6.8% are non-sworn. This is a ratio of 13.8 sworn officers per 1 civilian employee. This ratio is extraordinarily high when compared to other jurisdictions across the U.S. Based on data from 10,247 law enforcement agencies in cities across the U.S. that reported data to the FBI’s Uniform Crime Reporting Program in 2019, the ratio of officers to civilian employees was approximately to 3.5 sworn officers per civilian employee. On average, civilians made up 22.2% of total law enforcement agency employees.

Another commonly used measure is the ratio of police force size to population served. Based on data reported to the FBI in 2020 by 15,875 law enforcement agencies across the country, the national ratio of police officers to population is 2.4 officers per 1,000 people. By comparison, and according to this same data set, the Chicago Police Department had 4.7 police officers per 1,000 people in 2020.

The City of Chicago budget documents do not provide information about the number actual employees, which are often less than budgeted due to vacant positions. However, the Office of the Chicago Inspector General provides public data dashboards with the number of active City of Chicago employees. Based on this data, the Chicago Police Department has 12,261 active employees as of July 6, 2022. Compared to the CPD’s total budgeted personnel of 14,058, this indicates that 87.2% of all CPD positions are currently filled.

The Office of the Chicago Inspector General also publishes public data on the number of active sworn CPD members, which provides important insight into the number of actual filled positions among sworn officers at all ranks. This excludes civilian employees of CPD.

The chart below shows the number of active sworn members of the Chicago Police Department (including all ranks and position titles) in CPD from August 2017 through June 2022 based on active officer assignments data made available on the Office of the Inspector General “Sworn CPD Members by Unit and Month” data dashboard. The Inspector General began collecting data from the Chicago Police Department in August 2017. 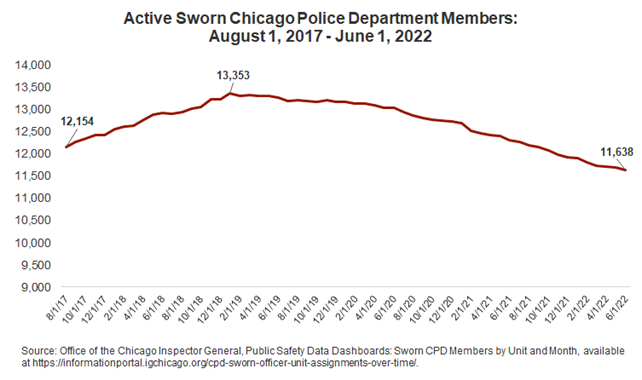 Organization of the CPD Budget

The charts below demonstrate how the CPD budget and budgeted positions are organized, as presented in the City of Chicago FY2022 annual budget appropriation. Red boxes represent divisions, blue represents sections and green represents sub-sections.

One major limitation to the organization of CPD budget is that it is not directly comparable to the CPD’s Organization of Command, which makes it hard to follow staffing assignments. Likewise, the CPD budget is not directly comparable to the active sworn CPD member data on the Inspector General’s data dashboards because the active sworn member data is based on the City’s human resources system (the Chicago Integrated Personnel and Payroll Systems).

The following are a few key takeaways: 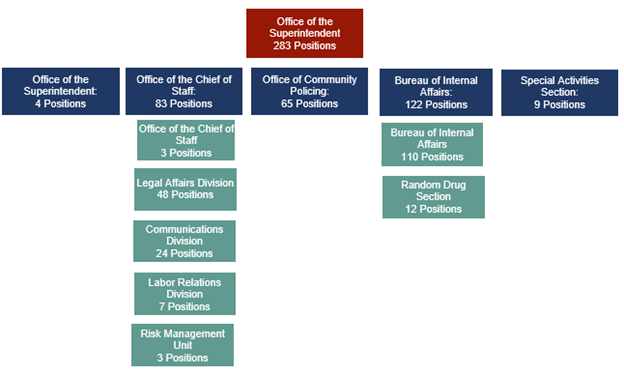 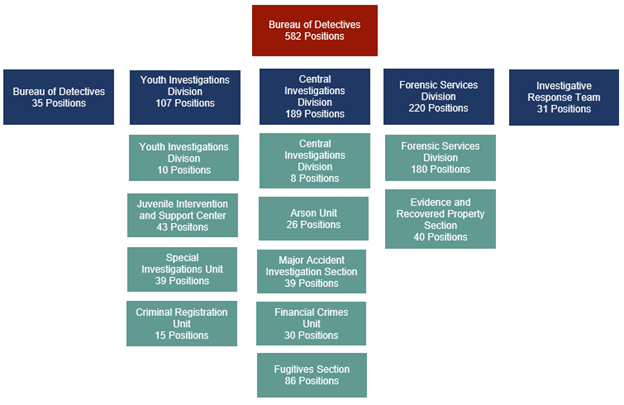 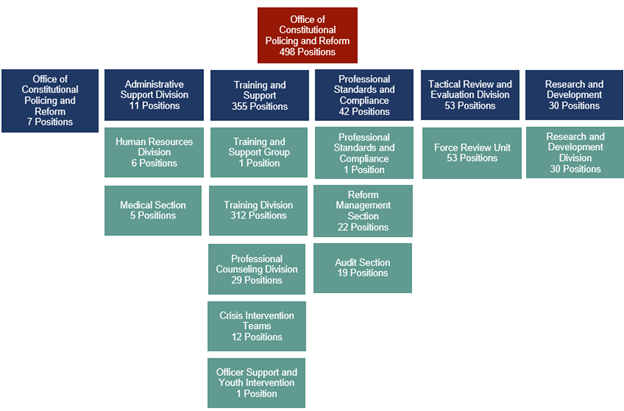 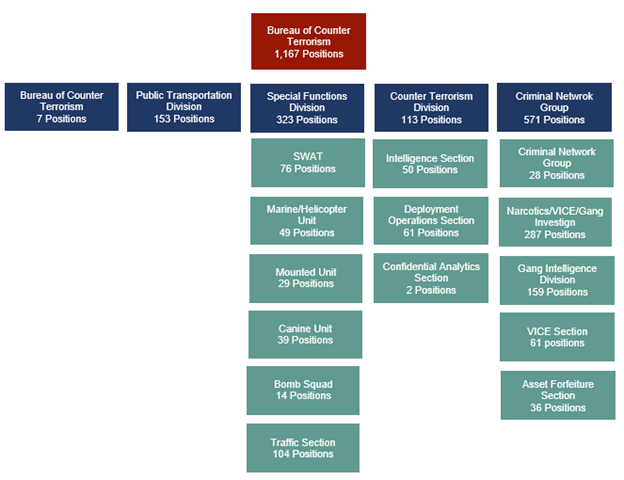 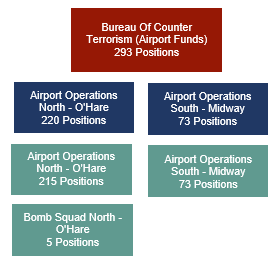 What is the Chicago Police Department Budget?

How Flexible is the Chicago Police Department Budget?