Chicago Public Schools (CPS) recently adopted its second amended budget of the 2017 fiscal year in an effort to balance its budget and close a $215.2 million hole before its fiscal year ends on June 30, 2017.

Chicago Public Schools adopted a $5.46 billion operating budget in August 2016 that relied on $215.2 million in State funding to help the District make its required $721 million pension payment due in June 2017. Governor Rauner vetoed the bill providing additional funding for CPS on December 1, 2016. Absent the supplemental pension funding, CPS will receive only $12.2 million in pension funding from the State, compared to the $4.0 billion the State will contribute in FY2017 to teacher pensions in all Illinois school districts outside Chicago.

The District released a second budget amendment in February 2017 to begin closing the $215.2 million budget hole. The revised budget included approximately $104 million in budget cuts, including four unpaid professional development furlough days, a freeze on discretionary school funds, a reduction in professional development funding and a proportionate reduction for charter schools. The Chicago Board of Education approved the second amended budget on February 22, 2017.

The first amended budget was released in November 2016 to reflect a labor agreement reached with the Chicago Teachers Union (CTU) that increased the Chicago Public Schools budget for the current fiscal year by $55.0 million. The Chicago Board of Education approved that amended budget on December 7, 2016.

A comparison of the originally adopted budget and the two amended budgets is presented in the table below.

The $104 million mid-year budget cuts left CPS with a remaining deficit of $111 million. At a public budget hearing held on February 13, CPS budget officials referred to the cuts in the amended budget as the “first phase” of closing the deficit. CPS officials said they remained hopeful that the State would still provide the remainder of needed funding. Board President Frank Clark emphasized that the budget amendment included no personnel or teacher layoffs.

The Chicago Sun-Times reported on February 20, 2017 that the discretionary school spending freeze disproportionately affected schools with majority Hispanic and poor student populations. At the February 22, 2017 Board of Education meeting, Chief Executive Officer Forrest Claypool responded to concerns that schools with higher percentages of Hispanic students received greater cuts than other schools on average, and announced that CPS would offer an appeals process to correct inequities or disproportionate impacts to school budgets. The Board of Education approved the budget as amended. Then, on February 24, 2017 the District announced that it would return $15 million to schools with high levels of poverty to mitigate disproportionate freezes to those schools’ discretionary spending budgets. An additional $3 million was given back to charter schools, totaling $18 million in unfrozen discretionary school funds. 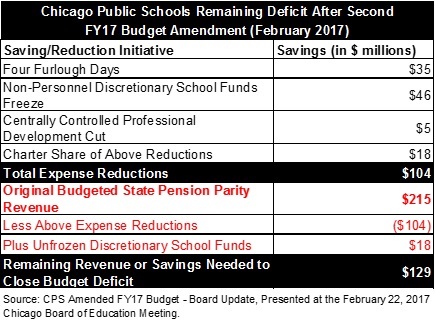 Next, CPS will need to determine how to close the remaining $129 million budget gap before the end of the fiscal year as required by law. This will depend in part on the outcome of a pending lawsuit filed by CPS against the State.

On February 14, 2017, the Chicago Board of Education and five CPS parents filed a lawsuit in the Cook County Circuit Court against the State of Illinois, the Illinois Governor, the Illinois State Board of Education and the Illinois Comptroller. The complaint alleged that the State education funding system is discriminatory. On February 27, 2017, the Board of Education filed a motion for a preliminary injunction, reportedly requesting a ruling before the end of April, that would prohibit the State from distributing education funds until it funds CPS in a nondiscriminatory manner. The affidavit of CPS Chief Financial Officer Jennie Huang Bennett in the motion states that if the Court and State do not act, the District could save $91 million by ending the school year on June 1 instead of June 20, and another $5 million by canceling elementary summer school, but she noted these choices would “directly affect the classroom.” CPS has acknowledged that the $91 million figure is net of Illinois State Board of Education penalties the District would incur for ending the school year early. But even with the estimated $96 million in total savings outlined in the affidavit, CPS would still be about $33 million short of a balanced budget.

Additional State funding would require the Illinois legislature and Governor to agree on a plan allocating additional funding for CPS pension costs. One such proposal is part of the Illinois Senate’s Grand Bargain legislative package, consisting of multiple connected bills. One of the bills, Senate Bill 5, would provide for the State to contribute $215.2 million to the Chicago Teachers’ Pension Fund in FY2017, followed by $221.3 million in FY2018 and enough to cover the employer normal cost in subsequent years. Senate Bill 5 passed the Illinois Senate on February 28, 2017. However, according to the structure of the Grand Bargain, all of the bills in the package must be approved by the Senate, House, and Governor for any of them to go into effect. CPS could wait to see if the Senate and House arrive at a consensus and if the Governor approves the plan, but given the ongoing stalemate in Springfield, continuing to rely on the State is risky.

Additionally, CPS has drained all of its operating reserves and is restricted from raising more tax revenue this year.

Chicago Sun Times: “Hispanic CPS schools’ budgets cut at twice the rate of white ones” and “Under pressure, CPS restores $15M for its poorest schools”