The City of Chicago has released a FY2021-FY2025 Capital Improvement Program (CIP).[1]  The purpose of a CIP is to establish priorities that balance capital needs with available resources, pair capital projects with funding sources, help ensure orderly repair and maintenance of capital assets and provide an estimate of the size and timing of future debt issuance. The first year of a CIP is the capital budget for that fiscal year. Developing a CIP is an important financial accountability measure because capital projects are costly and must be paid for over a number of years that the funds are borrowed.

Information about the City of Chicago’s long term debt and credit ratings will be available in the Civic Federation’s forthcoming analysis of the FY2022 City budget.

The FY2021-FY2025 CIP proposes approximately $11.2 billion in planned projects. It includes the Chicago Works capital plan that commits $1.4 billion in two years and $3.7 billion over five years in spending for capital projects and to address deferred maintenance issues.[2]

The five year CIP will include the following funding sources: 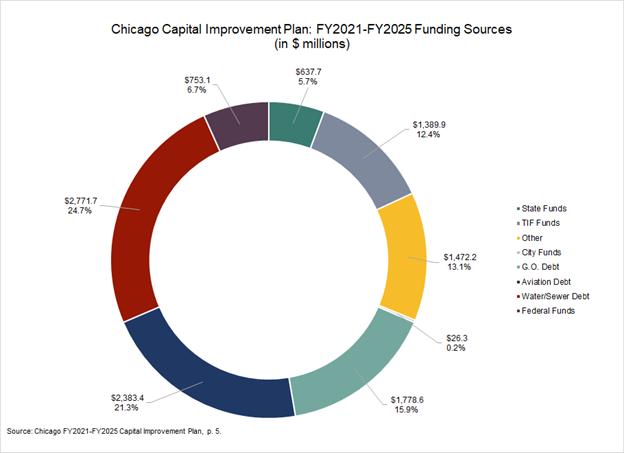 The next exhibit shows the distribution of Chicago FY2021-FY2025 CIP funds by program. The largest single component of the capital program will be $2.4 billion for aviation projects; this will total 21.6% of all CIP spending. Water and sewer infrastructure programming together will include nearly $2.8 billion in improvements, or 24.7% of all spending. Transportation projects will involve $2.4 billion or 21.1% of all spending earmarked over the five-year period; this will include bridge, street and intersection improvements as well as traffic signals and bicycle lanes. Approximately 18.4% or $2.0 billion will spent on neighborhood improvements such aldermanic menu items, street resurfacing and sidewalks. Smaller amounts will be used for municipal facilities, economic development projects, lakeshore improvements and open space projects that are part of the City Space program.

The aldermanic menu program allows individual Chicago aldermen to choose capital improvements for the wards they represent by picking projects from a “menu” of infrastructure projects. These projects include repairs to streets, alleys, curbs, sidewalks, American with Disabilities Act (ADA) ramps, traffic structures, alley lighting, streetlight improvements, beautification projects, and investment in schools and parks. The program was increased to $1.5 million per ward in 2021 from the previous amount of $1.3 million.[4] 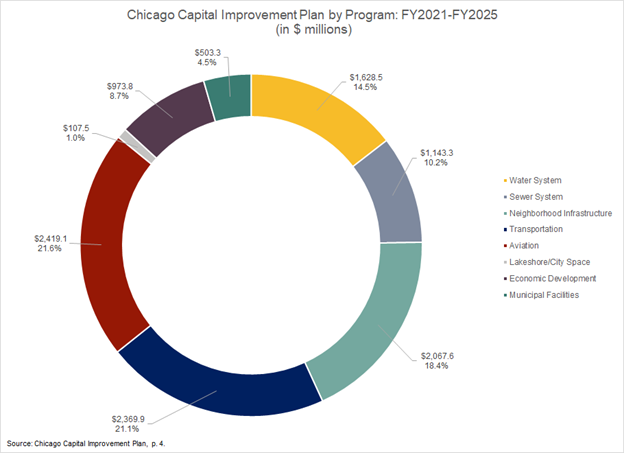 The following table evaluates the City of Chicago’s CIP format based on best practice guidelines from the National Advisory Council on State and Local Budgeting, the Government Finance Officers Association and Civic Federation budget analyses of local government budgets.[5]

The Chicago FY2021-FY2025 CIP posted online on the City’s website meets many best practice standards. It includes a summary list of projects, expenditures per project, funding sources and the time frame for completing projects.[6] Narrative information is now provided for the proposed capital projects for each program area. This include a description of project highlights. The CIP is made available for public inspection on the City’s website. However, the plan does not include a narrative description of the CIP process. Narrative information is now provided about the criteria used to identify and prioritize project selection, but there is no disclosure regarding how capital needs are determined or how individual projects are prioritized. There is no discussion of the capital plan’s impact on the operating budget. There appear to be few opportunities for stakeholders to provide input into the CIP process. While aldermen do have authority over the distribution of specific aldermanic menu projects in their wards, they do not formally approve the CIP. 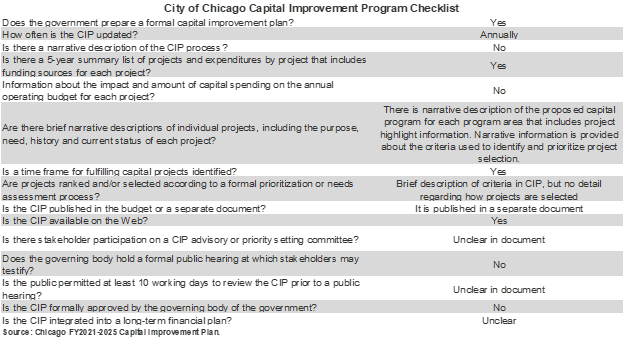 [1] The FY2021-FY2025 Capital Improvement Plan is available on the City’s website at https://www.chicago.gov/content/dam/city/depts/obm/supp_info/CIP_Archive/2021-2025CIPBookFinal.pdf.