For Chicago residents, the pension obligations per capita indicator is helpful in understanding the affordability of current retirement benefits. Ultimately, an examination of all long-term obligations is important to determine whether debt burden is sustainable or whether the full costs of providing government services are being deferred – an issue of intergenerational equity. When governments balance annual revenues and expenditures without hoarding excess cash or borrowing from the future, they achieve intergenerational equity among taxpayers and others who pay for and receive government services now and in the future.

It is important to recognize that pension liabilities are a product of actuarial calculations and market fluctuations. Also, governments frequently modify their pension contribution levels. Although Article XIII, Section 5 of the Illinois Constitution provides that membership in any pension system in the State is an enforceable contractual relationship and that member benefits “shall not be diminished or impaired,” it does not require that governments provide a specific level of funding to the pension systems.

The unfunded actuarial accrued liabilities (UAAL) is the amount by which a pension fund’s actuarial accrued liability (AAL) exceeds its assets, where the AAL is an estimate of the value of benefits already earned. It is important to note that some of the government’s calculations do not include other post-employment benefits (retiree healthcare) and no state and federal pension obligations are included in this calculation. The pension obligations per capita indicator trends are presented for local governments in the Chicago area from FY2004 to FY2013, the ten most recent years for which audited financial data are available.

The City’s portion of overlapping pension obligations include the following major Cook County governments with boundaries coterminous with the City of Chicago or located partially within its boundaries: the Chicago Public Schools, Cook County, the Forest Preserve District of Cook County, the Metropolitan Water Reclamation District and the Chicago Park District. To calculate the pension obligations per capita indicator, the Civic Federation includes the City’s portion of unfunded pension liabilities for all these governments, plus the CTA.

For more detailed information and evaluation of pension figures and trends for each local government, review the pension sections of our annual local budget analyses as well as blog posts on debt, pensions and other liabilities. 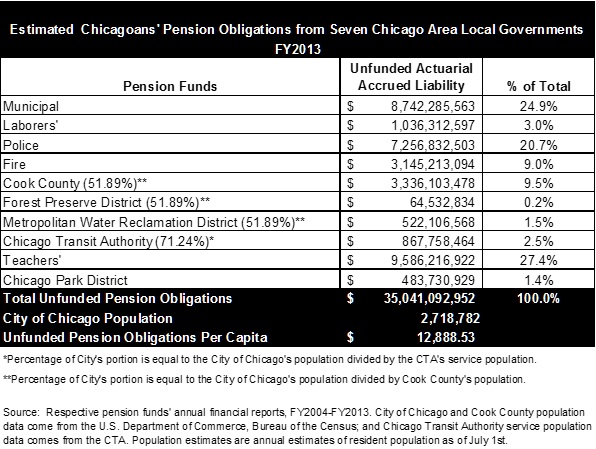 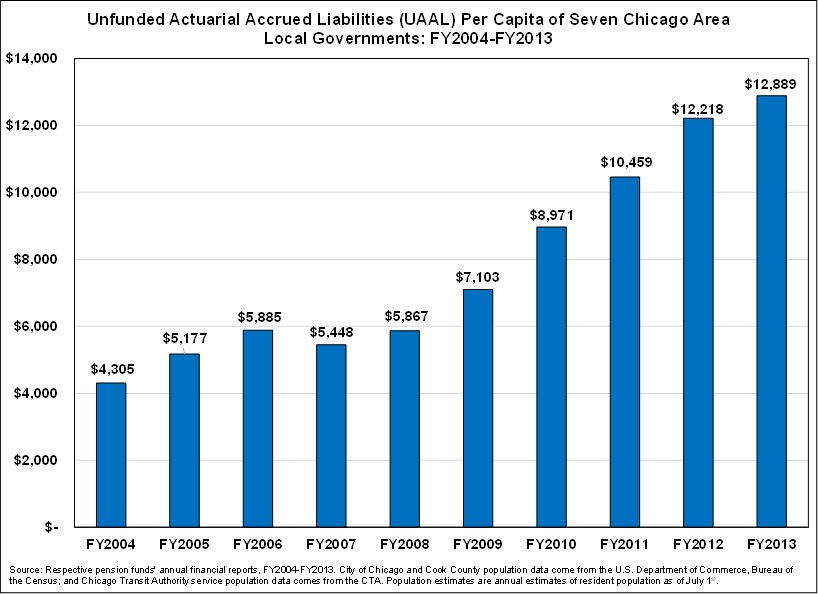