The Cook County Circuit Court recently ruled that the City of Chicago cannot tax other tobacco products according to Illinois state law. The City’s home rule tax on these products was expected to bring in $6.0 million in revenue.

The Chicago City Council adopted an Other Tobacco Products (OTP) Tax Ordinance on March 16, 2016 and the tax was scheduled to go into effect July 1, 2016. However, a lawsuit[1] was filed in the Cook County Circuit Court on May 31, 2016 challenging the ordinance because it violated Illinois State law, which states “a home rule municipality that has not imposed a tax based on the number of units of cigarettes or tobacco products before July 1, 1993, shall not impose such a tax after that date.”[2]

Following the lawsuit, the City agreed to defer the implementation of the tax “so the issues raised by the complaint can be briefed and decided on the merits, in a reasoned and measured manner, rather than on an emergency basis.”[3] The City’s ordinance on other tobacco products was projected to generate approximately six million dollars in new revenue, which was earmarked for a Chicago Public Schools high school orientation program, health programs and additional police hiring.

Listed below are the City’s tax rates on various other tobacco products that were approved in the ordinance but never went into effect due to the litigation: 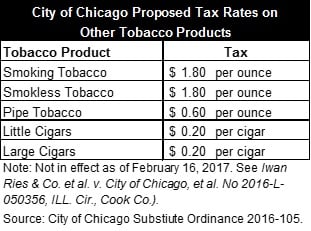 In addition, the City’s OTP Ordinance:

The City’s tax on other tobacco products was overturned by the Circuit Court on January 20, 2017 and the City has not yet determined whether it will appeal the ruling. The OTP ordinance was written such that in the event the OTP tax was invalidated by the courts, other sections of the ordinance would instead take effect 90 days after the final judicial determination or the effective date of the legislation. These sections establish minimum package sizes for little cigars and set price floors for certain tobacco products.

The price floors included in the ordinance are listed below. 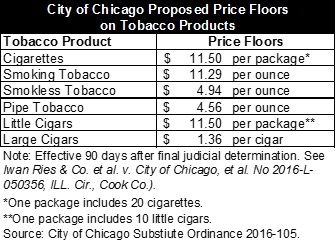 The above price floors could go into effect in late April at the earliest if the City does not appeal the ruling and the Circuit Court’s decision remains in effect. However, the plaintiffs in the case have indicated that they would appeal the price floor in the courts as an “improper litigation penalty.”

Other units of government at the federal, state and county level already impose a tax on other tobacco products that will remain in effect.

Cook County began taxing these products effective March 1, 2012. As of January 1, 2013, County taxes on tobacco include $0.60 per ounce of smoking tobacco and smokeless tobacco, $0.05 per little cigar and $0.30 per large cigar.

The State of Illinois imposes a tax on the wholesale price for non-cigarette tobacco products. Effective July 1, 2012, the State tax on the wholesale price for non-cigarette tobacco products increased from 18.0% to 36.0%. Effective August 1, 2012, roll-your-own cigarette machine operators are required to pay an annual license fee of $250. While this fee is not a consumer tax, the additional cost may be passed onto consumers. Cigarettes sold by roll-your-own establishments are also subject to the State’s regular cigarette tax of $1.98 per pack. As of January 1, 2013, moist snuff tobacco products are taxed at $0.30 per ounce. Previously, moist snuff was taxed at its wholesale price and categorized under smokeless tobacco.

The Civic Federation will continue to monitor this issue and other financial matters related to the City of Chicago and its overlapping governments.

Selected Consumer Taxes in the City of Chicago