Cook County plans to reduce financial assistance to its Health and Hospitals System by nearly 33% this year, from $411.5 million in FY2010 to $276.3 million in FY2011. The County will face major challenges related to the Health System’s budget and Medicaid revenues.

To achieve the allocated subsidy for FY2011, the Health System must meet its targets for revenues and expenditures. One challenge involves the collection of roughly $40 million in revenues related to Medicaid applications backlogged at the Illinois Department of Human Services (DHS), officials said at a meeting of the Health System’s Finance Committee on March 25, 2011. Another challenge is receiving approval from the Illinois Health Facilities and Services Review Board to end inpatient and emergency room services at Oak Forest Hospital. That move is a key component of the System’s five-year strategic plan and was budgeted to save $24.0 million in FY2011.

The table below shows the Health System’s subsidy from FY2007 through FY2011. The subsidy amounts in the table understate the true subsidy because they do not include County expenditures for Health System-related pensions and debt service. The allocated subsidy is the financial assistance that the County plans to provide to the Health System. 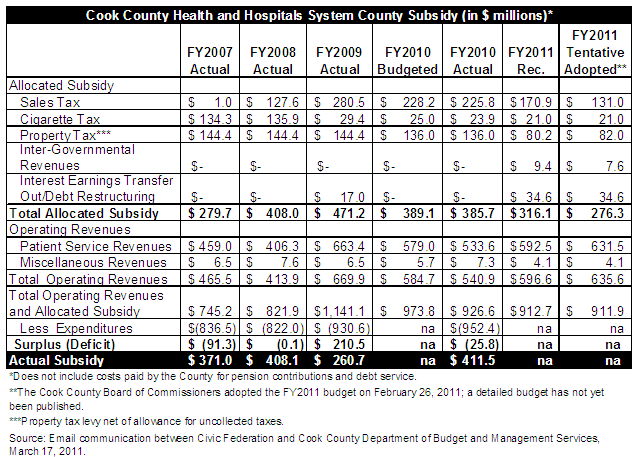 The actual subsidy in the table declined from $408.1 million in FY2008 to $260.7 million in FY2009, largely because the Health System in FY2009 received one-time, retroactive Disproportionate Share Hospital (DSH) payments under an agreement with the State completed in mid-2009. DSH payments are a special kind of Medicaid assistance to hospitals that serve large numbers of low-income patients.

In FY2010 the Health System’s budgeted subsidy was $389.1 million, but the System actually received $411.5 million to offset a shortfall in patient service revenues. The shortfall was attributed to lower than expected numbers of Medicaid patients and to the State’s delay in processing Medicaid applications from Health System patients.

The Cook County Board of Commissioners on March 15, 2011 approved an agreement with the State that allows the Health System to pay for extra state workers to handle the backlog of applications, which now totals 14,180 and represents $40 million in System revenues. However, Health System officials said at the Finance Committee meeting on March 25 that the State will probably not be able to hire new workers quickly enough to clear up the backlog by the end of the year. The next three months are critical, Health System officials said, because enhanced Medicaid reimbursement under the federal stimulus program ends on June 30, 2011. Health System officials have estimated that the decline in federal reimbursement on claims covered by the pending applications could cost the System an estimated $10.1 million.

The County intends to use these revenues to avoid hundreds of additional layoffs. The Board President had initially called for 1,300 layoffs, but the number was reduced to 750 through savings from furlough days. The County has not said precisely how many additional layoffs will be avoided through use of the Medicaid revenues. However, Board President Preckwinkle said in a radio interview on March 28, 201 that the number of expected layoffs now stands at more than 400, suggesting a further reduction of roughly 300 due in part to the Medicaid revenues.

During the same interview, the Board President said that she expects the Health Facilities and Services Review Board (HFSRB) to approve the proposal to end inpatient and emergency room services at Oak Forest Hospital at a meeting on May 10, 2011. The HFSRB rejected the plan by a vote of 3 to 2 on March 21, 2011. Under state law, five affirmative votes are required for passage. Currently only six members serve on the nine-member HFSRB and one was absent on March 21. Board President Preckwinkle said during the radio interview that she hopes Governor Pat Quinn will fill the three vacancies before the May 10 meeting.

As discussed in the Civic Federation’s Cook County Modernization 100-Day Accountability Report issued on March 25, 2011, the Health System faced budget challenges in FY2011 even before the problems described above. The System’s FY2011 recommended budget showed a 27.3% increase in patient fee revenues, from an FY2010 preliminary figure of $252.4 million to $321.2 million in FY2011. Included in fee revenues were a 33.5% increase in fees from Medicaid and a 74.2% increase from private insurers. These projections appeared to be optimistic, particularly in light of the fact that Medicaid fees in FY2010 were 22.0% below budget.