Fund balance is a term used to describe the net assets of a governmental fund and serves as a measure of budgetary reserves.[1] In FY2021, the last year for which audited financial information is available, Cook County’s total unrestricted general fund balance was $869.1 million. This was a $276.0 million, or 46.5%, increase from the prior fiscal year. It represented 53.6% of general fund operating expenditures of $1.6 billion.

A government’s Unrestricted fund balance can potentially be used for any purposes. It includes reserve funds identified as: [3]

The table below shows trends in Cook County’s unrestricted fund balance as a percentage of general operating expenditures between FY2013 and FY2021. It is based on audited data from the County’s most recent Annual Comprehensive Financial Reports. This ratio is a measure of whether a government is maintaining adequate levels of fund balance to mitigate current and future risks and ensure stable tax rates.[5]

Cook County’s unrestricted fund balance ratio fell from 14.1% in FY2012 to a low of 4.4% in FY2014 before beginning to steadily increase. The decrease in FY2014 was due to several factors: the General Fund absorbed a negative balance of $15.3 million in the Juvenile Justice Fund when the fund was reclassified; there was a revenue shortfall of $36.0 million in the Office of the Sheriff due to overtime expenses and a $15.0 million shortfall in the Office of the Circuit Court Clerk; and the County used $12.0 million to offset a shortage of payments from the State.[6]

Since FY2014, the fund balance has steadily increased, primarily because revenue increases have outpaced spending increases. The unrestricted fund balance increased to $99.3 million in FY2015, due largely to revenue increases from non-property taxes (including the Sales Tax, Use Tax, Gasoline Tax, Cigarette Tax, Amusement Tax, Non-Retailer Transaction Use Tax, and Parking Lot and Garage Operation Tax) and a reallocation of Cigarette Taxes to the General Fund from the Health Enterprise Fund.[7]

The fund balance rose in FY2016 to a ratio of 11.4% due to increased revenues, primarily from an increase in the sales tax rate implemented in FY2016, as well as growth in the Use Tax and the Non-Retailer Transaction Use Tax due to improved vehicles sales.[8]

It increased to 15.9% of General Fund expenditures in FY2017 primarily due to increased sales tax revenue, compliance initiatives resulting in increased revenue from a number of other non-property taxes and more timely payments from the State of Illinois.[9]

The fund balance increased again in FY2018 to $352.8 million, a ratio of 22.2% of operating expenditures. This increase in the fund balance ratio was primarily due to a reduction in expenditures of $83.4 million from the prior year through reduced personnel costs from the elimination of positions and reductions in overtime.[10]

The fund balance ratio increased in FY2019 to 28.2% due to revenues ending the year above expenditures, which resulted in a net change in fund balance of $103.6 million.[11]

The fund balance increased to $593.1 million or 42.1% of general operating expenditures in FY2020 in large part because of an increase in operating resources from the prior fiscal year. This included increases in income, cigarette, other tobacco products, cannabis, sports wagering and other non-property taxes; an increase in the allocation of property tax funds levied in 2019 to other funds; increased revenues from the State of Illinois due to the timing of grant funded appropriations; and higher than expected CVS Caremark Rx rebates as well as legal settlements.[12]

The fund balance rose substantially to $869.1 million in FY2021. This represented 53.6% of general operating expenditures. The increase was due primarily to two sources: 1) a $255.5 million increase in non-property taxes such as sales taxes, personal property replacement taxes, the county use tax and the cannabis tax; and 2) a $76.9 million increase in fee revenues in the County Clerk and Treasurer’s offices as well as a reclassification of revenue in the Sheriff’s Office to meet requirements of GASB 84.[13] 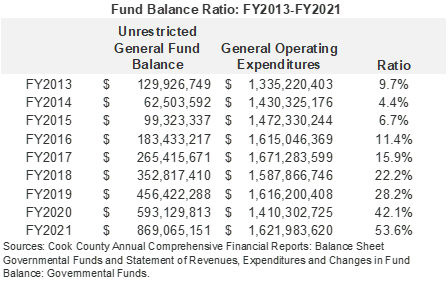 At the end of FY2021, the County had an unassigned fund balance of $703.6 million. This was above the targeted reserve amount of two months. The variance between the fund reserve ceiling of $441.9 million and the unassigned fund balance of $703.6 million was $261.8 million. Of that amount, $30 million is being proposed to be appropriated in the FY2023 budget to the County’s new Infrastructure and Equipment Fund. The remaining $231.8 million will be assigned to the following purposes:[18]

In FY2022 at year end, the variance between the fund reserve ceiling and the unassigned fund balance is projected to be $422.7 million.[19]

[3] GFOA, Fund Balance Guidelines for the General Fund at http://www.gfoa.org/fund-balance-guidelines-general-fund.

[4] GFOA, Fund Balance Guidelines for the General Fund at http://www.gfoa.org/fund-balance-guidelines-general-fund.