On October 25, 2013, Moody’s Investors Service downgraded the CTA’s bond rating to A1 from Aa3 and lowered its outlook to negative from stable. This makes it the seventh Chicago-area government or government agency to have been downgraded since July.

In describing its concerns, the ratings agency cited the financial condition and recent credit rating downgrades of the City of Chicago, Cook County and the State of Illinois as placing negative pressure on the CTA’s financial position. Moody’s reported concerns regarding the CTA’s increasing unfunded pension liabilities  and its significant capital needs that will likely require additional revenue and the issuing of new debt. Moody’s added that it believes such increases in revenue are unlikely, given the fiscal pressures the agency faces. Moody’s also noted the CTA’s shared tax base with the Regional Transportation Authority (RTA) as a concern.[1]

Beginning in 2006, the Illinois General Assembly enacted a number of reforms that were supported by the Civic Federation and have had a significant effect on the CTA pension fund. The urgency for reform of the CTA pension fund arose from the actuarial projection that the fund would be unable to pay retiree healthcare costs by 2008 and would reach 0% funding by 2013 if nothing was done to boost assets or reduce liabilities. The fund’s poor financial health was primarily the result of insufficient employer and employee contributions, early retirement programs, benefit increases and dramatic increases in the cost of healthcare over the past few decades.[2] The legislated reforms specifically addressed each of these issues.

Also included in the legislation was the deposit of $1.1 billion in pension obligation bond proceeds into the retirement fund and $528.8 million into a new Retiree Healthcare Trust. The infusion of funds brought the pension fund’s market value of assets from 39.3% funded in FY2007 to 66.0% funded in FY2008 and dropped unfunded actuarial accrued liabilities from $1.6 billion in FY2007 to $646 million in FY2008.

However, since FY2008 unfunded liabilities have grown from $0.6 billion to nearly $1.2 billion in FY2012. The increase is due to a number of factors including a reduction in the assumed investment rate of return (discount rate) from 8.75% to 8.50%, unfavorable market conditions and a change in the valuation of assets from a smoothed valuation to a market valuation, as well as employer contributions that were insufficient to prevent growth in the unfunded liability. As the chart below shows, the market value funded ratio of the pension fund fell from 66.0% funded in FY2008 to 59.4% funded in FY2012. This triggered increased contributions by the CTA and employees that will raise the funded ratio above 60% by 2022. 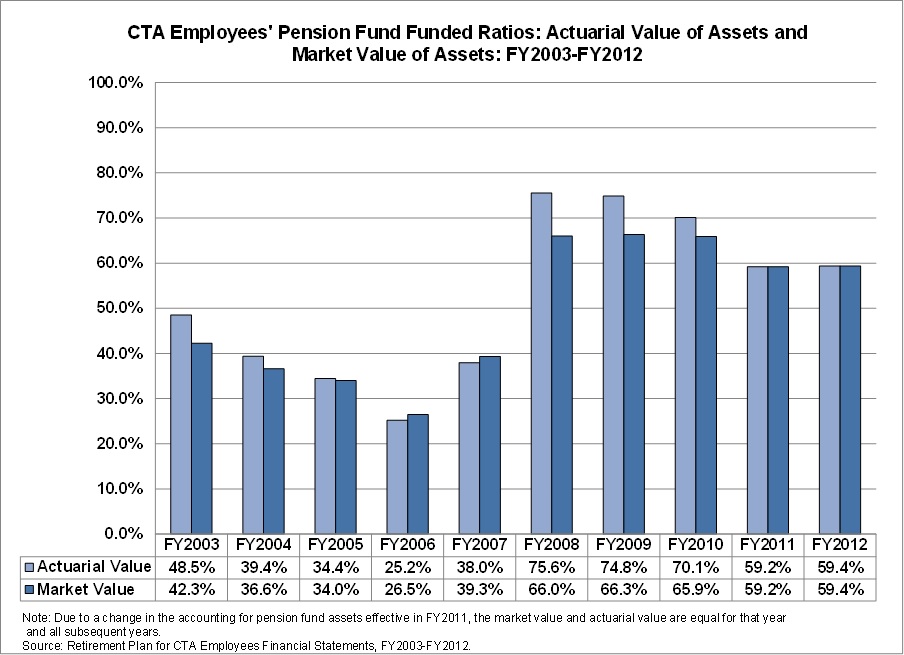 The CTA estimates that it needs approximately $844 million annually to keep its capital stock in good repair. This would total $4.2 billion over the five-year period. However, the five-year capital program for FY2014 to FY2018 proposed by the CTA President only provides for an average of $591 million in funding annually, which is a substantial funding gap.[3]

The following chart shows the CTA’s proposed capital spending for FY2014-FY2018 by the source of funding. New funding will pay for 63.6%, or $1.9 billion of the identified capital projects.  Federal funds will account for 46.9% of all funding and state subsidies will account for 16.8%. The remaining 36.4% of all capital funding, or just over $1.0 billion, will be funded from the CTA bond program, RTA bond funds and TIF distribution.