This blog post examines the Chicago Public Schools’ contributions to the Chicago Teachers’ Pension Fund in the FY2023 budget and the funding status of the Pension Fund based on financial health indicators. Additional descriptive information about teachers’ pension benefits and history can be found in past budget analyses.[1]

Certified CPS teachers are enrolled in the Public School Teachers’ Pension and Retirement Fund of Chicago (known as the Chicago Teachers’ Pension Fund or CTPF). Members of the Chicago Teachers Pension Fund do not participate in the Social Security program, so they are not eligible for Social Security benefits related to their CPS employment when they retire.

In FY2021, there were 31,215 active teachers participating in the pension fund and 27,610 beneficiaries. The following table shows the changes in CTPF membership over time and the ratio of actives to beneficiaries.

The Chicago Teachers’ Pension Fund is severely underfunded. A combination of pension holidays, statutory underfunding, benefit enhancements, optimistic assumptions and other long-term problems have all contributed to its condition. The CTPF was put on a 50-year funding plan in 1995 which requires employer contributions from CPS when the fund falls below a 90% funded ratio. Relatively small additional amounts were required from the State and from CPS pursuant to benefit enhancements enacted in P.A. 90-0582. Effectively, this meant that CPS did not make more than a minimal employer contribution between 1995 and 2004, when the funded ratio fell to 86% and CPS resumed payments in 2006.[2] The funding schedule was altered in April 2010 by Public Act 96-0889, which reduced the CPS required pension contribution for FY2011, FY2012 and FY2013 to an amount estimated to be equivalent to the employer’s normal cost as a response to a budget crisis at the District.[3] The law also delayed the year the pension fund must be 90% funded from 2045 to 2059.

The State of Illinois had traditionally contributed $65 million per year to the Teachers’ Fund pursuant to State statute, which declares the General Assembly’s “goal and intention” to contribute an amount equivalent to 20%-30% of the contribution it makes to the downstate Teachers’ Retirement System.[4] However, $65 million provided nowhere near the 20-30% goal. The State is also required to make small additional contributions to offset a portion of the cost of benefit increases enacted under Public Act 90-0582.

Illinois State legislation to change how P-12 education is funded through an Evidence-Based Funding formula, Public Act 100-0465, which was signed into law on August 31, 2017, included provisions to increase the State’s funding to Chicago teachers’ pensions starting in FY2018 to an amount equal to the annual cost of the pension plan’s benefits —the normal cost—and $65 million for retiree healthcare. The State normal cost and healthcare contribution offsets part of the statutorily required contribution. Public Act 100-0465 resulted in a significant increase in State funding to the CTPF, increasing funding from the State by $221 million during FY2018, which has decreased the amount of operating funds the District must direct to the pension fund. 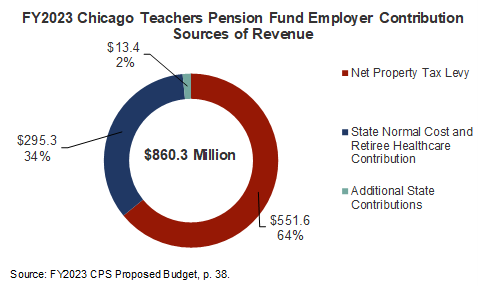 In addition to the contributions shown in the chart above, CPS contributes a portion of teachers’ own contributions to the pension fund, known as the pension “pick up.” That expense is projected to total $129.8 million in FY2023 and is discussed further below.[6]

As shown in the following chart, the year before the State started making normal cost pension payments, pensions made up $733.2 million or 13.5% of CPS’s operating spending in FY2017. However, the following year that decreased to $551.4 million or 9.7% with the passage of the P-12 Evidence-Based Funding law. The percentage of the operating budget dedicated to pensions declined slowly over the next several years and in FY2023, CPS’s pension contribution declined to 6.9% of the operating budget because of increases in the budget but also because the required contribution declined due to extraordinary investment returns in FY2021. 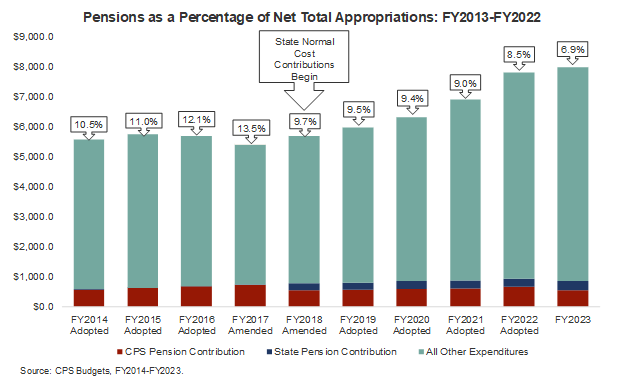 In order to analyze how far short of sufficient past years’ contributions have been, it is useful to compare the District’s actual contributions to an objective measure of how much it would need to contribute in order to pay off its unfunded liability over a set period of time. That measure, the Actuarially Determined Contribution (ADC), is a reporting requirement of the Governmental Accounting Standards Board and is reported in each pension fund’s annual actuarial reports.

The following chart compares the total actual employer contribution made by CPS and the State of Illinois to the CTPF as a percentage of payroll to the ADC as a percentage of payroll. The spread between the two amounts fell from a shortfall in FY2012 of 13.7 percentage points, or $371.4 million, during the District’s three-year pension funding holiday, to a gap of 3.7 percentage points in FY2018 due to CPS resuming pension funding, before growing again to a gap of 14.1 percentage points. In other words, to fund the pension plans at a level that would both cover normal cost and amortize the unfunded liability over 23 years, CPS and the State of Illinois would have needed to contribute an additional 14.1% of payroll, or nearly $334.0 million, in FY2021.

Employee contributions to the Teachers’ Pension Fund are statutorily set at 9.0% of the employee’s salary. One percent of that 9.0% amount is for survivors’ and children’s pension benefits.

For teachers hired before January 1, 2017, CPS “picks up” 7.0% of the 9.0% annual employee pension contribution, meaning it pays seven percentage points of the employee 9.0% contribution on behalf of teachers. The 2015-19 and 2020-24 Collective Bargaining Agreements with the Chicago Teacher’s Union ended the pension pick-up for teachers hired on or after January 1, 2017. Therefore, most teachers effectively pay 2.0% of their annual salary toward their pensions.

Funded Ratio: The most basic indicator of pension fund status is its ratio of assets to liabilities, or “funded ratio.” In other words, this indicator shows how many pennies of assets a fund has per dollar of liabilities. For example, if a plan had $100 million in liabilities and $90 million in assets, it would have a 90% funded ratio and about 90 cents in assets per dollar of obligations to its employees and retirees.

When a pension fund has enough assets to cover all its accrued liabilities, it is considered 100% funded. This does not mean that further contributions are no longer required. Instead, it means that the plan is funded at the appropriate level at a certain date. A funding level under 100% means that a fund does not have sufficient assets on the date of valuation to cover its actuarial accrued liability.

Investment Rate of Return: A pension fund invests the contributions of employers and employees in order to generate additional revenue over an extended period of time. Investment income provides the majority of revenue for an employee’s pension over the course of a typical career. In addition to the actual annual rate of return, the assumed investment rate of return plays an important role in the calculation of actuarial liabilities. It is used to discount the present value of projected future benefit payments and has been the subject of considerable debate in recent years.[7] The assumed rate of return for CTPF was reduced to 6.5% in FY2021 from 6.75% in FY2020.

Other major contributors to a pension fund’s financial status in addition to employer contributions and investment returns are benefit enhancements and changes to actuarial assumptions. 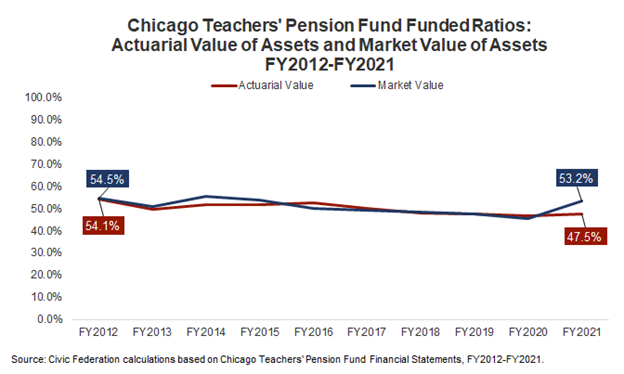 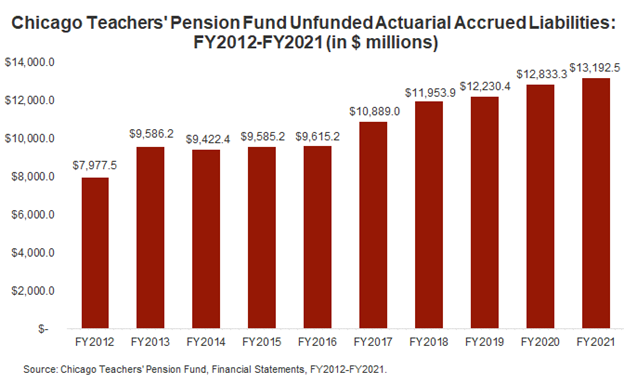 In FY2021 the CTPF experienced extraordinary investment returns far greater than its expected rates of return on investments, at 28.0%.[10] As noted above, the FY2021 investment assumption was 6.5%. 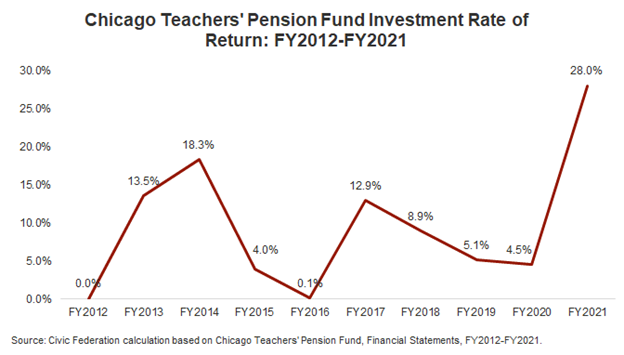 [3] “Normal cost” is an actuarially-calculated amount representing that portion of the present value of pension plan benefits and administrative expenses which is allocated to a given valuation year.

[7] For a short description of the debate see Thomas J. Healey, “Commentary: A note on the discount rate,” Pensions and Investments, October 8, 2019. Available at https://www.pionline.com/industry-voices/commentary-note-discount-rate.

[9] Total increase in unfunded liability includes increase in FY2012 over FY2011, included in the first line of the chart below.

[10] The Civic Federation calculates investment rate of return using the following formula: Current Year Rate of Return = Current Year Gross Investment Income/ (0.5*(Previous Year Market Value of Assets + Current Year Market Value of Assets – Current Year Gross Investment Income)). This is not necessarily the formula used by the pension funds’ actuaries and investment managers; thus investment rates of return reported here may differ from those reported in a fund’s actuarial statements. However, it is a standard actuarial formula. Gross investment income includes income from securities lending activities, net of borrower rebates. It does not subtract out related investment and securities lending fees, which are treated as expenses.