On August 10, 2022, the City of Chicago released its annual Budget Forecast for FY2023. The Forecast provides financial estimates for the City’s current fiscal year ending December 31, 2022 and a forecast for the next three fiscal years.

This was the fourth forecast produced by the Lightfoot administration pursuant to Executive Order No. 2019-3, which requires the financial forecast to be released no later than August 31 of each year. The forecast includes a general economic outlook, year-end estimates of current year revenues and expenditures, a three-year forecast, a summary of reported pension liabilities, an overview of the Tax Increment Financing (TIF) program, the property tax levy, a summary of outstanding debt and an analysis of reserves. This blog will focus on budget highlights within the Corporate Fund, which is the City’s general operating fund. Once the Mayor's proposed FY2023 budget is released this fall, the Civic Federation will release a full analysis and position.

State law requires that the City of Chicago produce an annual balanced budget for each fiscal year, which begins on January 1. In FY2022, the City of Chicago faced a $733 million budget gap that they were able to close through cost savings and federal pandemic relief funds.

The Budget Forecast projects a $134 million year-end surplus in the Corporate Fund for year-end FY2022. This surplus represents an $84.5 million increase in revenues and a $49.5 million reduction in expenses between the FY2022 adopted budget and the recently released year-end estimates, as reflected in the table below.

Of the $134 million surplus, the City plans to allocate $130 million in one-time resources toward the Assigned Fund Balance Reserve to be used for future one-time expenses. The City hopes these reserves will lessen the impact of future economic risks and support financial stability. After allocating $130 million to reserves, the final projected FY2022 surplus totals $4.0 million.

The graph below illustrates the changes in the initial projected annual budget deficits since 2015. Prior to this year’s forecast, the lowest projected budget gap in the last 10 years was in FY2019, where the budget gap declined to $97.8 million. However, in FY2020, the Corporate Fund deficit increased to $838.2 million due to the Lightfoot administration including expenses related to long-term liabilities and debt service into the preliminary budget forecast, and again to over $1.2 billion in FY2021. [1] The City was able to close this gap using portions of the City’s $1.9 billion in federal pandemic relief.[2] Of this amount, $1.3 billion was allocated towards closing the budget gaps from FY2021 through FY2023, with $733 million being used for revenue replacement to close the FY2021 budget gap and $385 million to close the FY2022 budget gap. [3] The preliminary FY2023 projections assume that the City will not undergo any major operational shifts in FY2023,[4] but anticipates a $228.2 increase in Corporate Fund expenditures, such as personnel, pensions and contractual services, over FY2022 levels.[5] The forecast further predicts that the Corporate Fund budget gap will increase to over $550 million in the next few years based on existing revenue and expenditure projections. 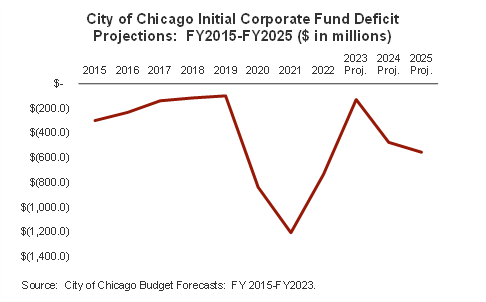 The chart below provides a detailed breakdown of the factors contributing to the aforementioned FY2022 surplus. Total revenue is projected to increase by $84.5 million compared to the FY2022 adopted budget.  Local tax revenue is projected to end the year $52.4 million above budget due to better-than-expected performance of the amusement tax as the City reopened amid the pandemic, as well an increase in Personal Property Replacement Taxes (PPRT). The City estimates that revenue from transaction taxes, driven by the personal property lease tax and real property transfer tax, are expected to end the year $56.8 million, or 9.8%, over budget. Other local taxes also increased, including the Real Property Transfer Tax at $30.6 million over budget and Recreation Tax at $36.3 million over budget. These increases will be partially offset by decreases in transportation tax revenue, which will fall $31.2 million below budget based on the continuing impacts of the pandemic.  Business taxes are predicted to finish at budgeted amounts. Proceeds and Transfers are projected to end the year $28.5 million over budget. [6] Intergovernmental Revenue is also projected to increase by $84.7 million due to higher-than-expected income tax and PPRT revenue.[7]

Despite better-than-expected economic performance in most revenue areas, Local Non-Tax Revenues are expected to finish FY2022 $81.2 million, or 5.7%, below budgeted due to a decrease in fines and penalties from better motorist compliance. 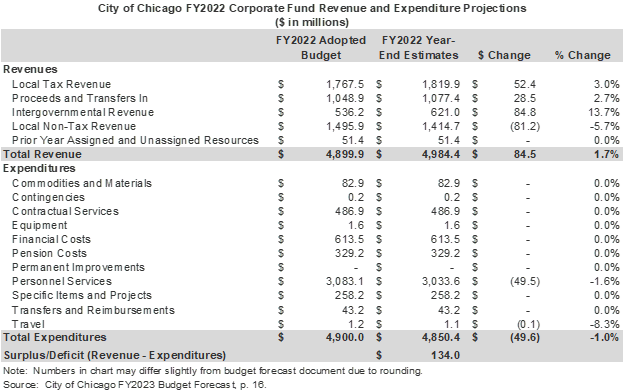 As the chart reflects, FY2022 year-end estimates project expenditures to end $49.6 million under budget.  The largest contributor to this reduction is a $49.5 million, or 1.5%, decrease in personnel service projections, which are due to employee attrition.  Travel expenditures are also poised to close the fiscal year $100,000 below budgeted amounts.  All other expenditure categories are on track to end the year on budget.[8]

FY2023 presents a better than previously anticipated outlook for the Corporate Fund.  As indicated in the chart below, the City projects entering FY2023 with a $127.7 million budget gap, largely driven by increased pension, personnel and contractual costs.[9]

The most significant categorical decline in revenues is for Proceeds and Transfers, which are anticipated to decline by 19.6%, accounting for a $211.6 million loss. This reflects the use of American Rescue Plan Act (ARPA) funds as revenue replacement. The City used $385 million in ARPA funds as revenue replacement in FY2022 compared to $152.4 million planned in FY2023.  The $49.9 million, or 3.5% decrease in Local Non-Tax Revenue is based on anticipated decreases in Other Revenue and Fines, Forfeitures and Penalties.

Total FY2023 expenditures are projected to increase by 5.7%, or $277.6 million, from the FY2022 year-end estimate.  The single largest dollar increase is the $150.3 million for Personnel Services, which is based on the required contractual growth assumptions in wages, salaries, and other expenses.  The $53.9 million increase in Contractual Services is reflective of cost inflation and contractual increases for elections and IT services.[11]

Pension expenditures from the Corporate Fund will increase by 20.2%, or $66.6 million, from year-end FY2022.  The Forecast notes that FY2023 will be the second year that the City’s pension fund contributions reflect required actuarily-calculated amounts.  Property tax levies typically provide the majority of revenue to support the City’s four pension funds.  The City proposes a 2.5% CPI increase for FY2023 property tax levy based on a five-year average, which is below the actual inflation rate of 7% and the 5% cap established in the Municipal Code.  The inflationary increase in the property tax levy will generate $42.7 additional revenues to be used for pension obligations. This, along with $40 million in casino proceeds, will reduce the amount of Corporate Fund resources needed to subsidize the pension funds, resulting in a total $395.8 million pension expenditure for the Corporate Fund in FY2023.[12] 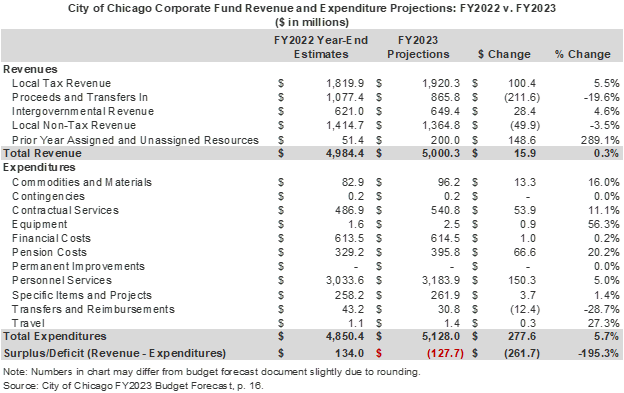 The Civic Federation will present an analysis of the full City of Chicago Budget for FY2023 upon its release this fall and will offer a position as more details become available.