It is conventional wisdom that taxpayers in Illinois pay some of the highest property taxes in the nation. That assertion is borne out in a report released last week by the Tax Foundation. The Foundation’s report provides a county-by-county and state-by-state context for evaluating property tax burden across the United States.

Local governments in Illinois rely on the property tax to fund everything from debt to pensions to day-to-day expenses. In tax year 2020 total property tax extensions for all taxing districts in Illinois were $33.8 billion, the majority of which—$20.8 billion or 61.5%—was for school districts.

While a reliable source of revenue for governments, property taxes tend to be controversial anywhere in the country because they are:

Using U.S. Census Bureau data, the Tax Foundation’s analysis looks at both median tax bills by county and effective tax rates by state to get a better idea of where property taxes are the highest.

Median taxes paid on owner-occupied housing by county show the central tendency of residential tax bills without being skewed by extremes at the high and low end. However, an annual tax bill is not necessarily a good measure of comparative burden by itself because higher value properties will generally have higher tax bills and higher value property tends to be concentrated in urban and suburban areas.

As shown in the following map, the median owner-occupied property tax bill in every county in Northeast Illinois fell into the highest category of median annual taxes paid of greater than $4,000 in 2020. It is important to note that this measure does not include commercial or other properties that have a higher tax burden by policy in Cook County and certain other jurisdictions across the United States. Lake County had the highest median property taxes paid in Illinois at $7,724. The lowest were in Pulaski County in far southern Illinois at $601. The Tax Foundation’s analysis found that in the United States, the highest median bills exceeded $10,000 in three New Jersey counties, four New York counties and Falls Church in Virginia. The lowest median property taxes paid of less than $200 per year were in Alaska, Louisiana and Alabama.

The Tax Foundation also examined effective tax rates for owner-occupied housing by state, as shown in the next map. This measure also excludes commercial and other types of properties. Illinois came in second to New Jersey on this measure. Residential property owners in Illinois paid 2.05% of the full value of their property in 2020, while those in New Jersey paid 2.21%. Hawaii had the lowest effective property tax rate of 0.31%, followed by Alabama at 0.39%. 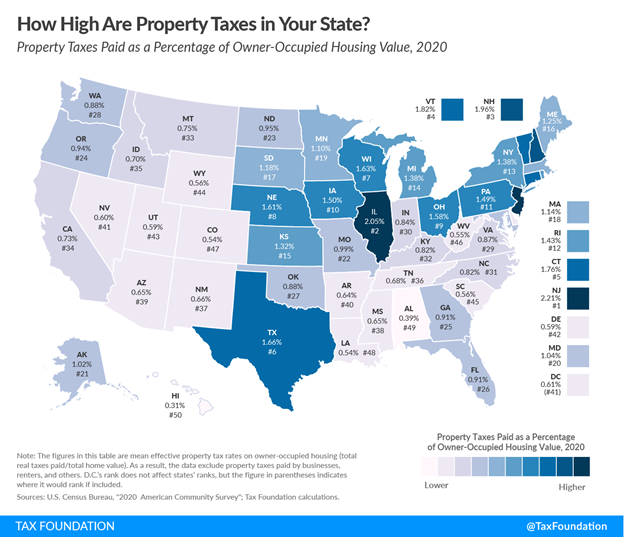 The Civic Federation will be releasing our 2019 effective tax rates report and 2020 estimate of the full value of property in Cook County in the next weeks. Our thanks to the researchers at the Tax Foundation for providing this information that helps show how Civic Federation reports fit into the national context.

This blog examines online reporting of American Rescue Plan Act (ARPA) spending and performance measures by major U.S. cities. A key component of ARPA was a $350 billion infusion of federal funding to state, local and Tribal governments nationwide to support their pandemic recovery through the...

A report recently released by the Civic Federation highlights the current processes in Cook County bond court, including...

From Budget Forecast to Budget Proposal: Changes to the City’s Revenue Projections

What Is a PTELL Referendum and How Does It Work?

In the State of Illinois, non-home rule units of government located in counties subject to the Property Tax Extension Limitation Law (PTELL) are limited in the size of their annual property tax extension to 5% or the increase in the Consumer Price Index (CPI), whichever is less. However, the...

This blog examines online reporting of American Rescue Plan Act (ARPA) spending and performance measures by major U.S. cities. A key component of ARPA was a $350 billion infusion of federal funding to state, local and Tribal governments nationwide to support their pandemic recovery through the...

A report recently released by the Civic Federation highlights the current processes in Cook County bond court, including...