The General Assembly has approved and Governor Pritzker has signed an approximately $46.5 billion FY2023 capital budget.

Unlike the State’s annual General Funds budget, which is intended to cover only the cost of operations for the current fiscal year, capital appropriations are reauthorized over multiple years as planning, engineering and construction of capital investments commence. Since 2005 the capital budget has been proposed in a separate document from the State’s operating budget and is not part of the annual General Funds expenditures. The current multi-year capital budget was initially approved in 2019 as the Rebuild Illinois capital plan; this action provides annual appropriation authority for capital project spending to proceed. Information about the Rebuild Illinois capital plan can be found here and here.

The State of Illinois capital plan currently does not include a comprehensive statewide capital improvement plan (CIP) that establishes priorities to balance capital needs with available resources, pairs capital projects with funding sources, helps ensure orderly repair and maintenance of capital assets and provides an estimate of the size and timing of future debt issuance. Rather, it primarily includes a list of projects.[1] Developing a CIP is an important financial accountability measure because capital projects are expensive and must be paid for over a number of years that the funds are borrowed.

However, Public Act 102-0573 approved in August 2021 does require the Illinois Department of Transportation (IDOT) to develop a multi-modal transportation improvement program for the state’s transportation system.  The purpose of the law is to use objective and quantifiable technical analyses to guide transportation investment decisions. To do that, IDOT is directed to develop:

The project selection or prioritization process must include public input from stakeholders as well as both a quantitative analysis of the evaluation factors to be used and a qualitative review by IDOT.

Beginning in April 2022 no new capacity projects may be included in IDOT’s multi-year transportation plan without being evaluated under the prioritization process.  The law also requires the Regional Transportation Authority (RTA) to develop a transparent prioritization process for Northeastern Illinois transit projects managed by the Chicago Transit Authority (CTA), Metra and Pace that receive State capital funding. More information on this important initiative can be found here and here. 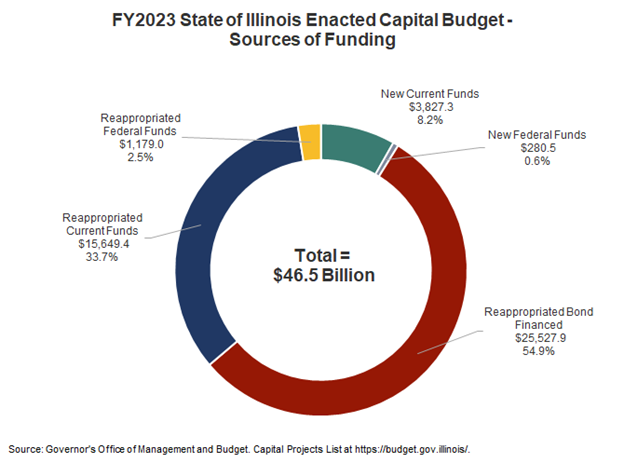 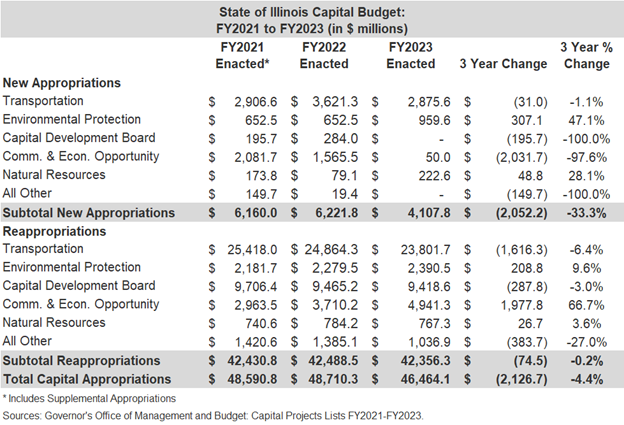 The next exhibit shows a breakdown of FY2023 capital budget spending by department and funding source. 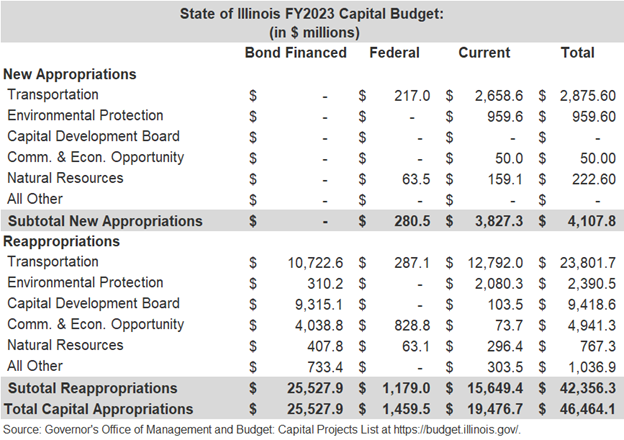 Total multi-year capital budget spending by major department for FY2023 is shown below. Funding for transportation, including statewide road and bridge construction, will be the largest portion of the State’s capital expenditures. The enacted FY2023 capital budget includes roughly $26.7 billion in total spending for the Illinois Department of Transportation, including the annual road program for ongoing surface transportation improvements (roads, bridges and mass transit). The second largest amount, or $9.4 billion, is earmarked for Capital Development Board projects. . Nearly $5.0 billion will be spent on projects overseen by the Department of Commerce and Economic Opportunity. 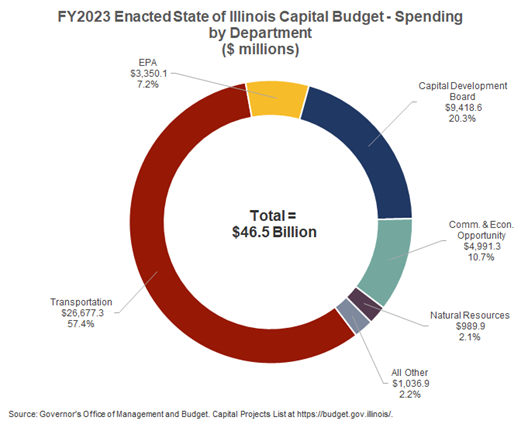 The FY2023 proposed one-year State Capital Budget projects that total resources deposited into all appropriated capital funds will rise by 9.3% in FY2023 from the previous fiscal year, increasing from an estimated amount of $10.2 billion in FY2022 to $11.1 billion. Approximately 55.6% of all revenues, or $6.2 billion, derive from non-tax sources (primarily fees and bond proceeds), 23.9% from state tax receipts and 20.5% from federal receipts.

State tax revenues will increase slightly by 1.1%, rising from $2.63 billion to $2.66 billion. Nearly 97% of all state tax revenues in both years derive from motor fuel taxes. The FY2023 enacted State budget included a 6-month freeze on the scheduled cost of living increase in the motor fuel tax. The motor fuel tax will be frozen at $0.39 cents per gallon beginning July 1, 2022 and ending January 1, 2023. This is estimated to generate $70 million.[3] 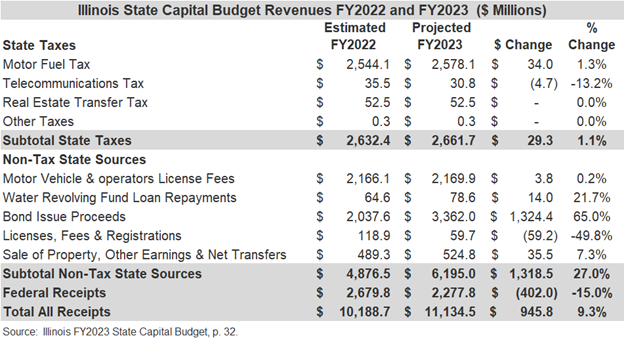 Bond ratings are one of the factors that help determine interest rates the State must pay to issue debt. The following chart shows the current ratings for Illinois’ General Obligation Bonds and Build Illinois Bonds. Information about State of Illinois credit upgrades in 2021 can be found here.

On May 5, 2022 Fitch Ratings upgraded State of Illinois general obligation bonds to BBB+ with a stable outlook from the previous BBB- rating. In addition, senior and junior lien sales tax Build Illinois obligation bonds were upgraded to an A rating from BBB+. Fitch based the upgrade on the State’s improved fiscal situation, including an increase in the State’s reserves and “sustained evidence of normal fiscal decision making.”[8]

On May 6, 2022, S&P Global Ratings on Friday upgraded State of Illinois general obligation bonds to BBB+ with a stable outlook from BBB and Build Illinois sales tax bonds to A- with a stable outlook from BBB+. The upgrade was based on S&P’s evaluation of the State’s improved fiscal condition, including improvements in fiscal reporting transparency, reductions in the outstanding bill backlog and the use of revenue surpluses to reduce liabilities.[9]

On August 9, 2022 Kroll Bond Rating Agency affirmed its previous credit rating of AA+ with a stable outlook for the State’s Build Illinois sales tax bonds. The reasons for the affirmation were the that the bond covenant includes a first lien on sales tax revenues, a continuing appropriation requirement and strong non-impairment protections.[10]

[1] One prominent example of a best practice state CIP is the Virginia Department of Transportation’s SMART SCALE. Virginia statute requires the use of an objective, weighted scoring system for each proposed transportation project that takes into account the project’s impact on congestion, safety, accessibility, economic development, the environment and transportation-efficient land use. The resulting scores guide lawmakers’ allocation of funding resources. See Code of Virginia, § 33.2-214.1; Virginia Smart Scale, https://smartscale.org/.