The General Assembly enacted an approximately $49.2 billion capital budget on May 24, 2020.[1] Spending proposed in the capital budget includes funding from the State, grants from the federal government and local matching funds. The multi-year capital budget was initially approved in 2019 as the Build Illinois capital plan; this action provides annual appropriation authority for capital project spending to proceed.

The expansion of gaming was intended to be the primary funding source for vertical construction projects. However, gaming operations were closed from March 16 to July 1, 2020 by order of Governor Pritzker. The reopening guidelines limit attendance to 50% of capacity.[3] This will reduce the amount of revenue available from gaming, raising questions about the near-term viability of the capital plan’s funding structure. Complete estimates are not yet available from the State of Illinois of the projected decreases in capital budget revenues.

Despite revenue decreases and uncertainty, the State of Illinois has proceeded with issuing $563.2 million in bonds to support construction projects during the summer and priority facility maintenance projects.[4] The State has said that it expects to continue to implement the Rebuild Illinois capital plan, though some projects already in progress are being suspended to comply with the Governor’s COVID-19 related executive orders.[5]

The capital plan does not include a comprehensive statewide capital improvement plan (CIP) that establishes priorities to balance capital needs with available resources, pairs capital projects with funding sources, helps ensure orderly repair and maintenance of capital assets and provides an estimate of the size and timing of future debt issuance. Rather, it primarily includes a list of projects. Developing a CIP is an important financial accountability measure because capital projects are costly and must be paid for over a number of years that the funds are borrowed.[6] 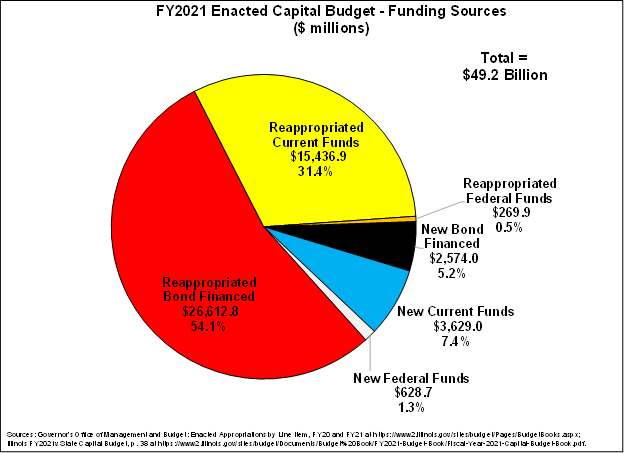 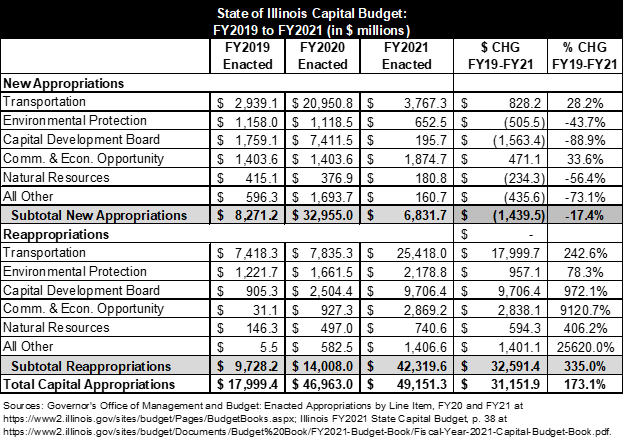 The next exhibit shows a breakdown of capital budget spending by department and funding source. The $3.6 billion in new FY2021 current (pay-as-you-go) funding was primarily appropriated for five departments: Transportation, Environmental Protection, the Capital Development Board, Commerce and Economic Opportunity and Natural Resources.

Of the $15.4 billion in reappropriated current funding, 81.3%, or $12.6 billion, was earmarked for Department of Transportation projects. 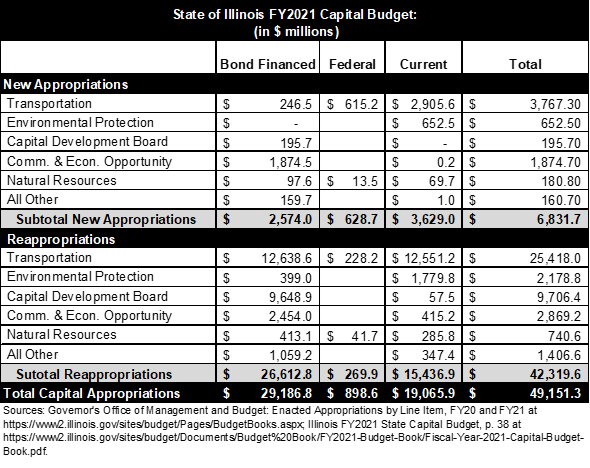 Total capital budget spending by major department for FY2021 is shown below. Funding for statewide road and bridge construction remains the largest portion of the State’s capital expenditures. The enacted FY2021 capital budget includes roughly $29.2 billion in total spending for the Illinois Department of Transportation, including the annual road program for ongoing surface transportation improvements (roads, bridges and mass transit). The second largest amount, or $9.9 billion, is earmarked for Capital Development Board projects. The Capital Development Board oversees the construction of new state facilities, including prisons, state parks, mental health institutions, and college and university projects.  It is also responsible for the renovation of state owned buildings.[7] 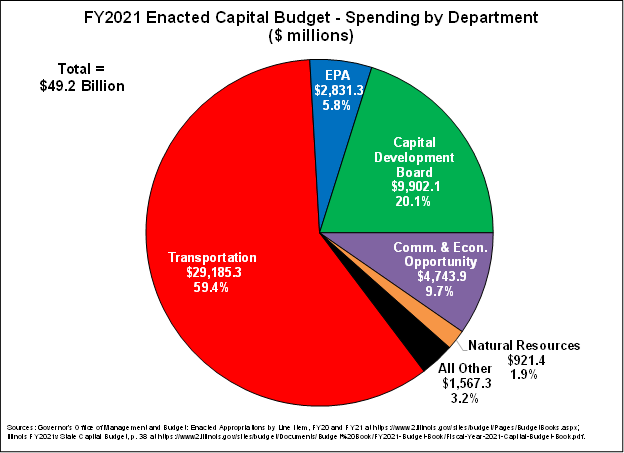 The original proposed FY2021 capital budget included estimates of $10.6 billion in tax and non-tax resources for capital purposes. Of that amount, $2.8 billion was to be derived from state taxes, including taxes on motor fuel, telecommunications, cigarettes and real estate transfer transactions. Nearly $5.6 billion was projected to come from non-tax sources such as fees and bond proceeds and the remaining $2.2 billion was to be provided from federal receipts.[8]

However, the economic disruption caused by the ongoing COVID-19 pandemic has seriously disrupted revenue collections. A study from the Illinois Economic Policy Institute found that Illinois motor fuel tax revenues in 2020 could be $300 million to $560 million less than originally anticipated from a revenue source that was expected to provide 66% of all transportation project funding.

As of this writing, the State of Illinois has not released revised FY2021 capital budget revenue estimates to reflect COVID-19 related economic changes. The Commission on Governmental Forecasting and Accountability’s Revised FY2021 Revenue Estimate published in May noted at that time here was a $2.9 billion decrease in general funds revenues from the March 2020 estimate of $40.1 billion.[9] As noted above, motor fuel tax revenues have declined below original forecast expectations. Between April and July 2020, motor fuel tax revenues were $654 million, which was only 55.1% higher than under the old tax rate, which was half the current rate.[10]

Bonds Issued for Capital Projects in May 2020

The Pritzker Administration issued $800 million in General Obligation bonds in May to support construction projects during the summer, priority facility maintenance projects and the pension buyout program. Of that amount, $563.2 million will be used for capital projects.[11]

In the Official Statement for the borrowing, the State said that despite the effects of the pandemic, it expects to continue to implement the Rebuild Illinois capital plan, though some projects already in progress are being suspended to comply with the Governor’s COVID-19 related executive orders related to the safety of workers, vendors and the general public.[12]  In the Official Statement, the State notes that it makes no predictions about the impacts of the COVID-19 pandemic on the receipt of revenues earmarked for capital projects.

In 2019 the General Assembly approved and the Governor signed into law a new $45.0 billion multi-year capital plan called Rebuild Illinois. This was the first state capital plan since the Illinois Jobs Now! Capital plan that was approved in 2010.[14]

To pay for the massive Rebuild Illinois capital plan, the State enacted two revenue bills, one to pay for “horizontal” transportation projects and a second to pay for “vertical” construction projects.

Public Act 101-0032 authorized transportation-related revenues that are constitutionally restricted to “horizontal” transportation expenditures.[15] These resources are projected to deliver over $1.9 billion annually once they are fully implemented. A primary source is a doubling of the motor fuel tax from $0.19 to $0.38 per gallon, the first increase in Illinois since 1990. Motor fuel tax revenues will grow in subsequent years as the increase is indexed to inflation. The revenues from Illinois’ current sales tax on gasoline will be shifted to transportation expenditures over seven years, eventually totaling $600 million per year by FY2026. Increased taxes on other fuels and vehicle registration fees are expected to provide an additional $753 million per year.[16] Despite the relative stability of the motor fuel tax, transportation experts have some concerns about its long-term viability. Average fuel efficiency has risen and is expected to continue rising, potentially reducing revenue in the future.[17]

Public Act 101-0031 authorizes revenues dedicated to non-transportation, “vertical” construction projects. These revenues are expected to generate approximately $810 million annually at full implementation. About $460 million is to come from a variety of sources, including an increased tax on cigarettes, a parking garage tax, a limitation on the sales tax exemption for traded-in vehicles and new rules to collect sales tax from online retailers.[18]

The centerpiece of the “vertical” revenue bill is a massive expansion of gambling, including legalization of sports wagering, new casinos around the state and a mega casino in Chicago. The expansion is expected to generate $350 million annually at full implementation plus several hundred million dollars more in upfront license fees for new and expanded gambling facilities. However, the ability of the State to implement the expansion quickly remains in doubt, as it requires implementation of new regulations and the selection of expansion sites. Expanded gambling capacity in Illinois could exhaust demand and face strong competition from facilities in neighboring states.[19]

An additional concern was that the proposed Chicago casino might not be attractive to investors because of the heavy tax burden imposed by the State and the City in the original enabling legislation. A study by Union Gaming Analytics commissioned by the City concluded that the combined State and City tax rate would be approximately 72%. This rate combined with estimated operating expenses of 30% might make a casino unprofitable.[20] Failure to develop a Chicago casino and its accompanying revenue stream would make it difficult to fully fund the vertical capital projects.

To make a Chicago casino more fiscally feasible, Mayor Lightfoot proposed amending the vertical revenue bill. The original enabling legislation required the Chicago casino to pay a reconciliation fee to the State of Illinois equal to 75% of the highest grossing receipts less fees paid for each gaming position after a three-year period.[21] Mayor Lightfoot proposed allowing the 75% reconciliation fee for all casinos to be paid in equal installments over a six-year period without interest charges.[22]

In May 2020, the General Assembly approved legislation replacing the 33.3% city tax on post-payout revenue with a graduated tax structure on slot machines and table games ranging from 10.5% on revenue up to $25 million to 34.7% of revenue greater than $1 billion.[23] It also increased the timetable for reconciliation fee payments for all Illinois casinos from two to six years and gave applicants a longer period of time to pay for a license if the Illinois Gaming Board approves.[24] The Governor signed the casino legislation on June 30, 2020.[25]

The following exhibit lists the various funding sources approved for the Rebuild Illinois capital plan. They include increased as well as new taxes and fees. When these revenue sources are fully operational, the State originally estimated that they could generate as much as $2.7 billion annually to support pay as you go and debt financing for capital projects. The $600 million in proceeds from the state sales tax on motor fuel shown below is not an increase in funding, but rather an incremental shift of those revenues from the General Fund to the Road Fund by FY2026.

It is important to note that these estimates were calculated prior to the COVID-19 pandemic, which has dealt an enormous blow to State of Illinois revenues across the board. Complete revised estimates have not yet been provided by the State. 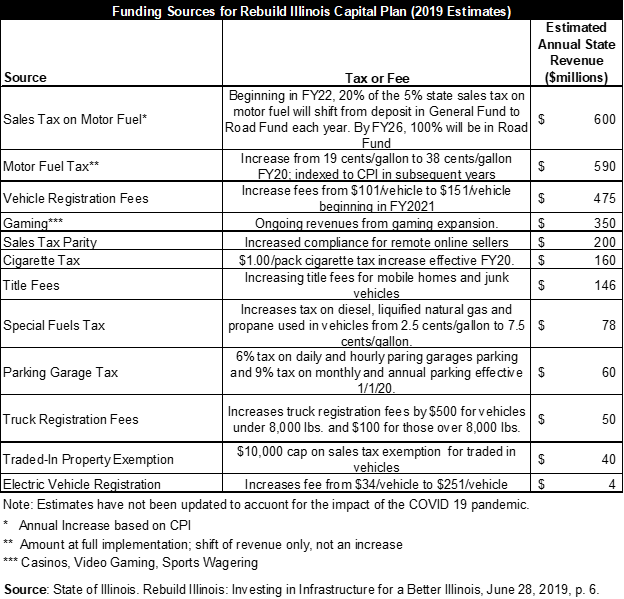 [1] Governor’s Office of Management and Budget: Enacted Appropriations by Line Item, FY20 and FY21 at https://www2.illinois.gov/sites/budget/Pages/BudgetBooks.aspx.

[3] Mitchell Armentrout, “Illinois casinos angling to clean up now that coronavirus closing is over,” Chicago Sun-Times, July 1, 2020 at https://chicago.suntimes.com/2020/7/1/21310622/illinois-casinos-reopen-coronavirus-shutdown-pritzker-rivers.

[6] One prominent example of a best practice state CIP is the Virginia Department of Transportation’s SMART SCALE. Virginia statute requires the use of an objective, weighted scoring system for each proposed transportation project that takes into account the project’s impact on congestion, safety, accessibility, economic development, the environment and transportation-efficient land use. The resulting scores guide lawmakers’ allocation of funding resources. See Code of Virginia, § 33.2-214.1; Virginia Smart Scale, http://vasmartscale.org/.

[7] Illinois Capital Development Board at https://www2.illinois.gov/cdb/about/Pages/default.aspx.