During a series of State appropriations hearings held by the Illinois General Assembly in both the House and Senate this spring, State agency leaders discussed their budget requests included in Governor Pritzker’s proposed FY2022 State Budget. In these discussions, agency directors began to identify how the new Illinois criminal justice reform law, House Bill 3653 or the SAFE-T Act, will impact State agency budgets and what kind of additional resources will be needed at the state level. Initial estimates primarily impact the Illinois Criminal Justice Authority and the Illinois Law Enforcement Training and Standards Board, although the sweeping bill will affect policies and practice across the entire justice system from the courts to prisons to law enforcement agencies.

The following table provides a summary of the agency budget requests in the Governor’s proposed budget of selected criminal justice system agencies. It shows appropriations from General Funds, as well as from Other State Funds and Federal Funds. 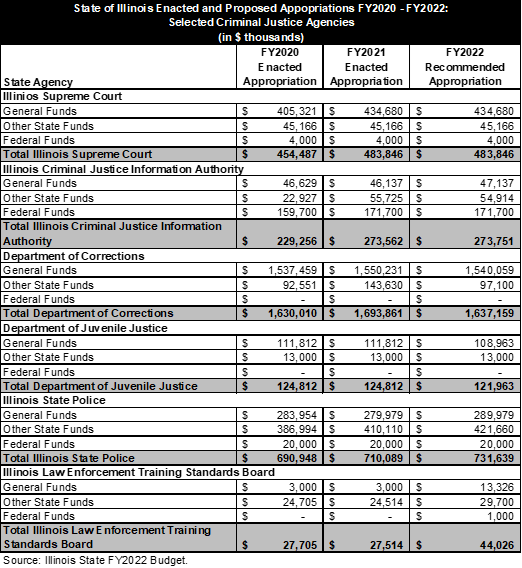 Each of these criminal justice agency’s funding requests is discussed further below. It is important to note that these budget appropriations figures are spending authority, or amounts that each agency is authorized to spend during the fiscal year. Actual expenditure amounts are often much lower than the authorized appropriations.

The FY2021 budget also included funding for a statewide data collection and data reporting platform to allow the Supreme Court to directly integrate data from the databases used by local court and law enforcement agencies. With the passage of the SAFE-T Act, the Administrative Office of the Illinois Courts (AOIC) is responsible for convening a Pretrial Practices Data Oversight Board. The Chief Justice said this task will require additional judicial branch resources to oversee collection and analysis of data. The new platform will be an integral part of collecting pretrial data from criminal justice agencies. The AOIC estimated the data platform would cost $1.6 million to purchase. The AOIC is in the process of finalizing a procurement contract for that system.

In response to a question about additional pretrial positions needed for implementation of the SAFE-T Act, the AOIC said the Illinois Supreme Court Pretrial Practices Task Force is compiling an analysis of the staffing infrastructure needed to support pretrial supervision statewide and associated cost estimates. New pretrial release processes included in the SAFE-T Act go into effect January 1, 2023.

of $273.8 million is an increase of just under $200,000 from the prior year. This includes an increase of $1.0 million within General Funds and a decrease of approximately $800,000 within Other State Funds.

ICJIA anticipates that it will need at least an additional $1 million to implement various requirements of the criminal justice bill signed into law by Governor Pritzker in February, the SAFE-T Act. The new law requires ICJIA to:

ICJIA Director Delrice Adams explained that the request of $1 million above the prior year budget is a conservative estimate for the staffing and data collection needs that will be required of the agency. Additional funding of between $1-2 million may be required for ICJIA and the AOIC to fulfill the pretrial data collection and reporting requirements.

The Illinois Department of Corrections (IDOC) budget request of $1.54 billion is a $10.2 million decrease in the General Funds from FY2021. The Illinois proposed budget says the IDOC budget reflects savings of $7.7 million in contractual expenses and $3.0 million in commodities due to prison population management efforts associated with COVID-19 and reevaluation of existing space.

The John Howard Association, which independently monitors Illinois prisons and policies, testified at the appropriations hearings with suggestions that IDOC do the following: conduct an independent assessment of facilities operations and infrastructure and renovate, repurpose and close facilities as necessary; conduct preventive maintenance; refrain from reducing the IDOC budget that it says has been under-resourced for years; further reduce the Illinois prison population by revising sentencing policies; and reform the procurement process to give IDOC more control over and better structure its contracts.

The Illinois Department of Juvenile Justice (IDJJ) budget request for FY2022 is approximately $109 million, a $2.8 million decrease (2.5%) from the prior year enacted budget. Director Heidi Mueller explained that the agency is able to reduce spending from the FY2021 enacted appropriation due to savings on commodities associated with a decrease in the incarcerated juvenile population, as well as through contract efficiencies from streamlining contracts with service providers. The Department also has slowed the rate of filling vacant positions due to the population decrease.

IDJJ operates five juvenile detention facilities and eight aftercare (post-release community supervision) centers across the State. As of February 2021, the in-custody population was 136 and 498 juveniles were assigned to aftercare supervision. The number of youth in custody has decreased significantly over the years, from approximately 750 in July 2014. When asked why there has not been a corresponding decrease in spending along with the decrease in population, Director Mueller explained that the IDJJ budget does not decrease proportionately to the population reduction due to fixed costs associated with the IDJJ facilities. The outdated facilities require significant maintenance and staffing to operate. There is also significant excess capacity; IDJJ facilities have capacity for 750 children. Additionally, IDJJ is required to maintain certain staffing ratios in order to remain in compliance with consent decrees.

The Director said part of the IDJJ transformation plan to address this issue includes a move away from unnecessary large capacity facilities to smaller regional residential centers that provide trauma-informed rehabilitative care. The Department is currently in the process of renovating a site in Lincoln to serve this purpose.

The Illinois State Police budget request for FY2022 is $731.6 million. This represents an increase of $21.5 million, or 3.0%, over the FY2021 enacted appropriation. It includes an increase of $10.0 million within the General Funds and an increase of $11.5 million within Other State Funds. Personnel headcount is proposed to increase to 2,836 from an estimated 2,700 positions in FY2021. The budget includes funding for one new cadet class of 45 troopers, as well as additional positions for the Cannabis Control Office.

Regarding funding needed to implement the SAFE-T Act, Illinois State Police Director Brendan Kelly said the Department’s request includes additional funding for police officer body-worn cameras as part of the requirements for all police officers statewide to wear body cameras by 2025. The Governor’s proposed budget includes $2 million for the State Police to begin this phased-in implementation of body cameras as well as cover the cost of data storage. Director Kelly said the Illinois State Police budget is otherwise not as impacted by the SAFE-T Act as other agencies such as the Illinois Law Enforcement Training Standards Board.

The Illinois Law Enforcement Training Standards Board (ILETSB) budget request for FY2022 represents the largest increase among all of the agencies included in this analysis. ILETSB is requesting total funding in all funds of $44.0 million in FY2022, a $16.5 million, or 60.0% increase over the FY2021 appropriation of $27.5 million. The increase is requested in order to comply with new requirements included in the SAFE-T Act including additional training requirements for law enforcement officers, creation of web portals to improve transparency and information sharing between law enforcement administrators, the creation of a Certification Review Panel that will oversee the decertification process, and a new process for the Board to accept officer complaints submitted from employers, prosecutors and the general public. These requirements, ILETSB Executive Director Brent Fisher said during hearings, will require new certification specialist and investigator positions as well as a technology overhaul and record digitization. ILETSB initially estimates that it will need an additional 15 staff members, increasing headcount from 25 to 40 positions.

ILETSB is responsible for certifying and training 40,000 officers statewide and 3,000-4,000 new recruits each year. The FY2022 budget requests $26.2 million for training grants and reimbursements to local agencies. In previous years this funding amount was $16.2 million. The FY2022 proposed budget includes $9.8 million for basic law enforcement and corrections training and $16.4 million for in-service training. The Law Enforcement Camera Grant Act Fund, which reimburses local jurisdictions for the cost of purchasing body cameras, will remain flat at $3.4 million. The Board’s Director said some local departments are also concerned about the cost of video storage, leases, and support functions such as reviewing and redacting footage. These costs cannot be reimbursed through the camera grant program.

The FY2022 request includes appropriations of $5.3 million for Board operations including personnel costs and contractual services within General Funds. The budget also requests an increase from $3 million to $8 million in the General Funds Deposit into the Traffic and Criminal Conviction Surcharge Fund. This fund was historically the Board’s sole source of funding. Following the implementation of the Illinois Criminal and Traffic Assessment Act in 2019, funding to ILETSB was significantly reduced. Therefore, additional General Revenue Funds have been allocated to make up for that shortfall in the Traffic and Criminal Conviction Surcharge Fund. The Board views this funding concern as a long-term funding need that will need to be addressed by additional legislation.