On May 30, 2014, a day before the end of the Illinois General Assembly’s regular spring session, the Senate passed the FY2015 budget previously approved by the House.

As discussed below, the budget does not cut spending or extend existing income tax rates that are scheduled to be rolled back midway through FY2015. It relies instead on short-term measures —including borrowing and shifting revenue from FY2014—to cover operating expenses in FY2015. Before the Senate voted on the budget, Republican lawmakers held a news conference on a resolution to prevent a vote after the November general election on making the higher income tax rates permanent.

Governor Pat Quinn, who had recommended that existing income tax rates be extended, said in a statement that the budget was incomplete and postpones difficult decisions. In a separate statement, Senate President John Cullerton said the budget allows the State to fund key priorities through deferrals, borrowing and increasing the backlog of unpaid bills.

The precise size of the FY2015 General Funds budget could not immediately be determined because the spending plan is composed of several different pieces of legislation with numerous line items and no spending totals. Media accounts have reported the General Funds spending total at $35.7 billion, but it was not clear why this figure was higher than the projected revenue total of $35.4 billion adopted by the House and discussed below.

As the Illinois legislature approached the end of its regular spring session on May 31, 2014, lawmakers began to advance a budget for the coming fiscal year that does not address the State’s impending fiscal cliff.

The budget approved by the House of Representatives on May 27 does not cut spending or extend existing income tax rates that are scheduled to be rolled back midway through FY2015. It relies instead on short-term measures—including borrowing and shifting revenue from FY2014—to cover operating expenses in FY2015.

The House’s FY2015 spending plan is reportedly approximately flat with FY2014, but it does not provide for negotiated wage increases and other known spending pressures. If enacted, the budget is expected to result in growth in the State’s multi-billion dollar backlog of unpaid bills.

The House approved the May 27 budget after considering two other spending plans. On May 15, the House narrowly approved appropriation bills based on extending the higher tax rates, the path recommended by Governor Pat Quinn in his FY2015 budget proposal. However, House Speaker Michael Madigan did not forward the bills to the Senate because he lacked nearly half the votes needed to extend current income tax rates and provide revenue to support the spending. On May 23, a spending plan based on the pending reduction to existing income tax rates, known as the doomsday budget, was rejected by the House on a vote of 5 to 107.

The May 27 budget, which Speaker Madigan has called a middle-of-the-road budget, is based on projected general operating resources of $35.4 billion in FY2015 with the lower income tax rates. The revenue projection, adopted as House Joint Resolution 100, compares with a previous projection of $34.5 billion in February 2014 and estimated FY2014 General Funds revenues of $36.7 billion, according to the legislature’s Commission on Government Forecasting and Accountability (COGFA). 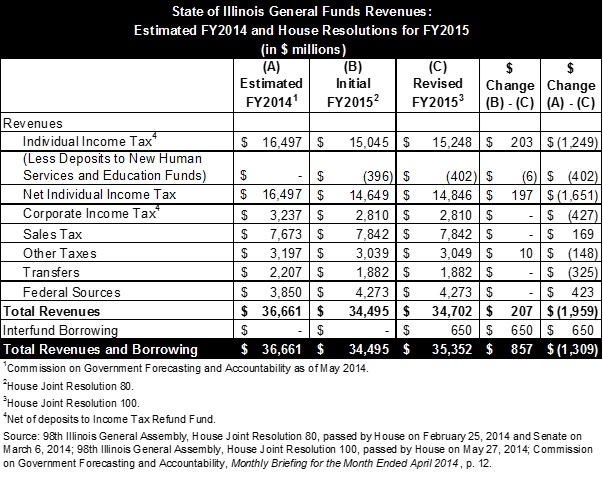 The latest House revenue projection for FY2015 at $35.4 billion is $857 million higher than the February projection largely due to proposed borrowing of $650 million from accounts outside of the General Funds. As discussed here, this kind of interfund borrowing must be repaid with interest at relatively low rates. Governor Quinn’s FY2015 budget proposal relied on interfund borrowing to pay for a new homeowners’ grant program.

The FY2015 General Funds resources projected by the House are still $1.3 billion below estimated FY2014 revenues of $36.7 billion. However, General Funds spending in FY2014 of approximately $35.9 billion was based on a lower revenue estimate. Under the House’s latest spending plan, most of the projected operating surplus of approximately $800 million in FY2014 will be used for spending in FY2015. A supplemental appropriations bill for FY2014, passed by the House on May 28, uses $600 million of the FY2014 surplus to pay for FY2015 Medicaid expenses.

In his recommended FY2015 budget, the Governor had proposed to use roughly $500 million of the FY2014 operating surplus to reduce the outstanding group health insurance bills at the end of that year to approximately $1 billion. The House plan allocates only $100 million to those bills. In FY2015 the House budget devotes $1.6 billion in General Funds to group insurance compared with $1.5 billion in the Governor’s budget proposal.

The Governor’s FY2015 budget proposal would also have used $112 million of the FY2014 surplus to pay for back wages owed to union employees due to a dispute over cancelled raises. The latest House plan allocates $50 million for the back wages.

Although most agency spending is reportedly flat with FY2014, the latest House spending plan for FY2015 includes an increase of $118 million in General Funds appropriations to the Illinois State Board of Education. Supporters said the increase was intended to provide enough General State Aid to fund 89% of the Foundation Level, roughly the same percentage as in FY2014. The Foundation Level, which is established by statute, represents the minimum per child amount of financial support that should be available to provide for the basic education of each student. General State Aid is designed to help fill the gap between the Foundation Level and the amount a district can provide from local property tax revenues and other local resources.

It is difficult to immediately determine the precise size of the House’s FY2015 spending plan because the five appropriation bills passed on May 27 do not provide spending totals. The bills are House Bills 6093, 6094, 6095, 6096 and 6097. In addition, a budget implementation bill required to carry out the FY2015 spending plan has not yet been approved.

Although the Senate has not considered the House budget, Senate President John Cullerton has reportedly reached an agreement with Speaker Madigan on the spending plan. Both legislative leaders have said that more revenues would have to be found after the November election to run State government.