Illinois Should Not Budget for Payment Delays

Businesses do not always pay their bills immediately, and neither do governments. Delays of a month or two are standard practice, although prompt payment is preferable to take advantage of discounts, avoid penalties and maintain access to the largest possible pool of vendors.

Since FY2009, long payment delays by the State of Illinois have been a highly visible sign of the State’s financial distress. With revenues under pressure due to the Great Recession, the State also faced growth in statutorily required pension contributions.

Illinois’ total bill backlog has declined from a peak of $9.9 billion in 2010 to less than $4 billion as of the end of FY2014, according to Governor Pat Quinn’s administration. A recent news release from the Governor’s Office stated that the backlog is now “closer to the typical private industry 30-day billing standard,” which was estimated at about $2.2 billion for Illinois.

But allowing for a 30-day payment delay does not mean that it is prudent for the State to end the fiscal year with a backlog of unpaid bills. Unless there is cash on hand at the end of the year to pay the bills, the State must cover them out of next year’s revenues. This reduces the resources available to pay next year’s expenses, leaving a hole in that year’s budget.

For example, the State ended FY2013 with $4.1 billion of accounts payable in its general operating accounts, compared with cash of only $154 million. More than $4 billion of FY2014 resources were needed to cover the FY2013 bills. (This amount refers only to General Funds payables and does not include other General Funds liabilities. As explained here, other General Funds liabilities involve costs incurred in a given year and paid from future appropriations. Currently these other liabilities consist mainly of group health insurance claims but in previous years included significant amounts of Medicaid bills.)

The Illinois Comptroller’s Office considers the General Funds budget to be balanced if the year-end cash balance is sufficient to cover lapse period spending. The following table, based on numbers available on the Comptroller’s website, shows the calculation of budgetary balance from FY2000 through FY2013.

As indicated in the above table and in the following chart, based on this measure the State has not had a balanced budget since FY2001. The largest deficit—$6.1 billion, or about one-fifth of revenues—was at the end of FY2010, with a year-end cash balance of $130 million and lapse period spending of $6.2 billion. An explanation of Illinois’ financial crisis by the Comptroller’s Office can be found here. 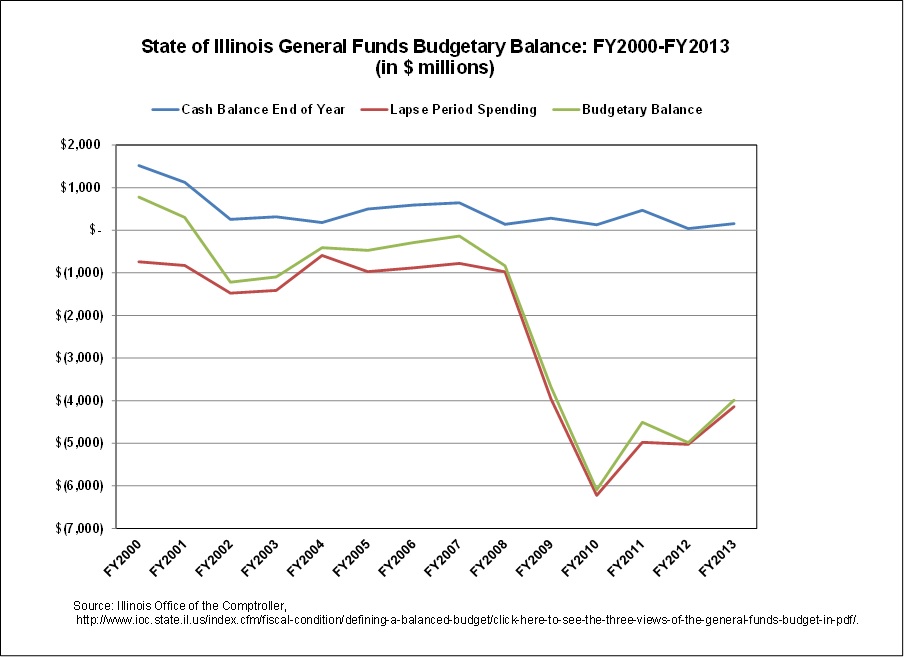 The chronic use of current year revenues to pay billions of dollars of old bills is a major reason why Illinois has the lowest credit rating of any state. The large backlog of unpaid bills was one of the factors cited by Standard & Poor’s in July 2014 when it revised its outlook for Illinois from developing to negative. A negative outlook means that the State's credit rating could be downgraded within two years unless its financial condition improves.

As discussed here, S&P blamed the stopgap FY2015 budget approved by the Governor and General Assembly for the change in perspective. The rating agency also cited concern that a recent ruling on health insurance for State retirees by the Illinois Supreme Court could impede implementation of pension changes enacted in December 2013.

The bill backlog could grow in the current fiscal year due to the scheduled expiration in January 2015 of income tax rate increases enacted in 2011. The budget approved by the General Assembly in the last days of the session that ended on May 31, 2014 does not cut spending or extend the existing income tax rates. It relies instead on short-term measures, including borrowing and shifting revenue from FY2014, to cover operating expenses in FY2015. According to a recent filing in connection with the State’s outstanding bonds, total unpaid bills are expected to increase by $283 million in FY2015 and the budget underfunds known costs, including payroll, by approximately $470 million.