Legislatively Required Transfers: Another Use of State General Operating Funds

General Funds represent the largest component of the State of Illinois budget and are mainly used to support the regular operating and administrative expenses of state agencies through annual appropriations by the General Assembly.[1] General Funds are also diverted to Other State Funds to make debt service payments on bonds and for a wide range of other legislatively required transfers—from distributing state income taxes to local governments to promoting thoroughbred breeding and racing. These transfers are not included in the State’s General Funds appropriations but make up a significant share of the annual budget.

The table below shows how General Funds are used in Governor Pat Quinn’s FY2011 revised budget plan and FY2012 recommended budget plan, both of which were issued in February 2011.[2] The FY2012 budget proposes total expenditures and transfers out of $35.4 billion. Of that total, $30.5 billion represents net appropriations and statutorily required pension contributions.[3] The remainder consists of debt service of $2.5 billion and legislatively required transfers of $2.3 billion. Legislatively required transfers account for 6.5% of FY2012 proposed expenditures from General Funds. 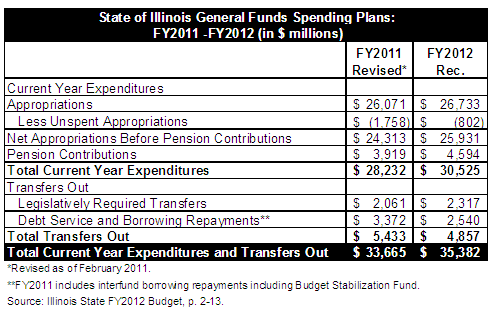 The largest legislatively required transfer out of General Funds is to the Local Government Distributive Fund. The Local Government Distributive Fund is projected to receive $1.1 billion from General Funds in FY2012, or 46.9% of total legislatively required transfers of $2.3 billion.[4] Under Illinois law, a specific share of state income tax proceeds is distributed to local governments.[5] The share had been 10% but was lowered after the State increased income tax rates in January 2011 so that the State received the full benefit of the tax increase while the share for local governments remained the same.[6]

The table below shows projected amounts of legislatively required transfers out of General Funds for FY2011 and FY2012. Besides the Local Government Distributive Fund, other major recipients include the Public Transportation and Downstate Public Transportation Funds, which receive money under various state sales tax acts and distribute it to the Regional Transportation Authority (RTA) and to local mass transit districts outside of the boundaries of the RTA[7]; the School Infrastructure Fund, which receives money from the state telecommunications tax that is then used to pay debt service on school construction projects and for other purposes;[8] and the Tourism Promotion Fund, which receives money from the state hotel tax that is then used to advertise and promote tourism throughout Illinois. [9]

Certain legislatively required transfers are one-time diversions. For example, the Healthcare Provider Relief Fund is projected to receive $160.0 million in General Funds in FY2012 to assist the State’s Medicaid program.[12] This money is intended to make up for proceeds from the settlement of tobacco litigation that were formerly used for Medicaid but are now being used for debt service on bonds.

A listing of all state funds can be found on the website of the Illinois Comptroller’s Office.[13] The site contains descriptions of each fund and citations for its statutory origin.