A provision of the General Obligation Bond Act in Illinois requires the State to structure its bonds so that equal amounts of the funds borrowed are repaid in each year of the loan. This structure, called level principal, benefits the State’s long-term debt profile by reducing the overall cost of borrowing and protects future borrowing capacity by ensuring annual debt service payments will decline over the life of the bonds.

However, this rule only applies to the bonds issued by the State. Recently, in response to the growing debt costs and expensive back loading of bonds by some local governments, the Civic Federation recommended that both the Chicago Transit Authority and the City of Chicago adopt similar constraints to avoid further exacerbating their long-term debt costs.

As a general rule, the longer a borrower takes to repay a loan the higher the interest rate demanded by investors. Delayed repayment of borrowed funds also leads to more accumulated interest paid over the life of the loan. The funds borrowed are known as the principal and, combined with the interest owed, make up the debt service payments.

When mandatory repayments of principal are back loaded to the end of a financing, it maximizes the interest that must be repaid and increases the total cost of government operations paid for by bonds. Both the City and the CTA have back loaded their bonds in recent years.

As discussed here, the State of Illinois suspended its level principal requirement in FY2011 when it sold Pension Obligation Bonds (POBs) to make its annual contributions to the retirement systems for the second year in a row. Although this allowed the State to delay its payments on the FY2011 POBs until the POBs sold in FY2010 were paid off, the increase in interest cost was dramatic.

The FY2010 POBs totaled $3.5 billion in principal repaid over five years in equal amounts of $693.2 million annually. The interest owed on the bonds totaled $382.3 million. The FY2011 bonds totaled $3.7 billion in principal, but repayment of more than half of the funds borrowed was delayed for five years in order to avoid an increase in debt service for the second year of pension borrowing. This led to a massive increase in interest to be paid by the State on the FY2011 POBs, which totaled $1.3 billion over eight years, for only a slight increase in total funds borrowed.

The State chose the back-loaded structure for the FY2011 POBs despite the additional cost in order to achieve relatively level debt service payments over the life of the combined FY2010 and FY2011 issuances. These bonds were sold amidst a financial crisis caused by revenue losses in FY2010 attributable to the global economic recession. Despite the expensive nature of the financing, terms of the repayment were relatively short. When long-term bonds with maturities of 20 years or more are back loaded, the interest cost often will exceed the original funds borrowed.

As pointed out in a recent investigative series published by the Chicago Tribune, the City of Chicago faces an enormous debt burden from its long-term borrowings over the last ten years, many of which included back-loaded bond repayment structures. Currently the City of Chicago has $7.7 billion in total General Obligation principal outstanding and owes $6.7 billion of interest on those loans, which are scheduled to be repaid through FY2042.

One of the City’s more expensive bond issuances was sold on May 16, 2012. The Taxable Project and Refunding Series 2012B Bonds totaled $308.0 million of principal borrowed but will cost $516.8 million in interest based on a rate of 5.4% over the life of the debt through 2042. The bonds are structured in the most costly way possible, deferring all principal payments until the final year of the deal, 2042.

If the City had instead sold the same $308.0 million of bonds with a level principal structure at the same interest rate, the total interest cost over the same time frame would have been only $276.0 million. That would have represented a decrease of 46.8% or $242.6 million.

The following chart compares the annual interest cost for the City of Chicago Taxable Project and Refunding Bonds Series 2012B with the estimated cost of selling the same bonds with a level principal debt service structure at the same interest rate. 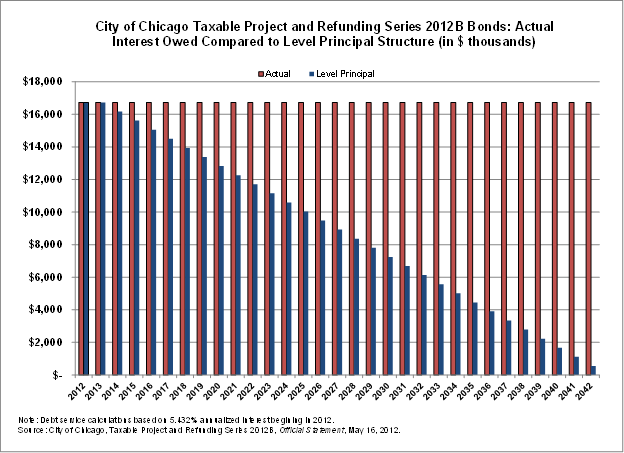 Requiring a government to sell its bonds using level principal structures does have some drawbacks. It limits the flexibility to meet particular market demands at the time of the bond sale. The repayment of principal in the early years also makes the annual debt service higher than if interest only is paid. 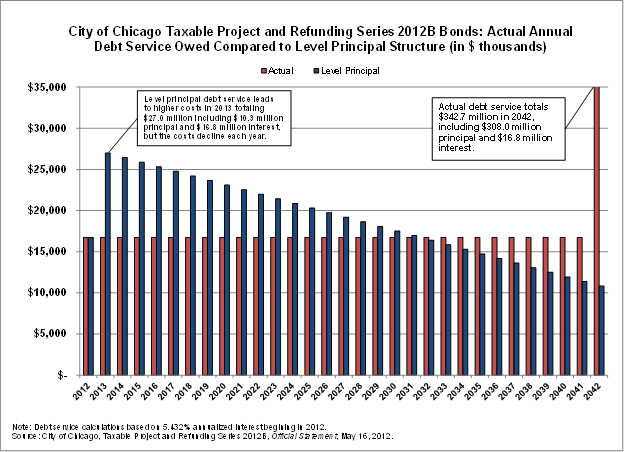 Although the City would have to pay more in the early years of the repayment under the level debt service rules required by the State, as shown above, the total cost of borrowing would be dramatically reduced if the City was held to the same standard. Not only would the debt service be reduced by $242.6 million for the same amount of principal borrowed, but the City also would not face the looming balloon payment of $342.7 million in 2042.