The proceeds from these sources are deposited in the Capital Projects Fund and used to pay for debt service on new capital bonds and some ongoing capital expenses. This was intended to limit the General Funds impact of the additional debt sold to pay for the new capital budget.

Despite the new funding, the debt service transfer associated with capital-purpose General Obligation bonds (GO bonds) in FY2015 will increase by $92 million, totaling $717 million compared to $625 million in FY2014. Over the last five years the General Funds debt service cost for capital bonds has increased by $177 million from a total of $540 million in FY2011. The operating budget incurs higher costs for capital purpose debt service due to the shortfall in revenues in the Capital Projects Fund.

The $31 billion Illinois Jobs Now! capital program  included $16 billion worth of new bond funded projects in FY2010. The State has currently sold $12.3 billion of the bonds needed to pay for these appropriations. However, due to slow implementation of the new revenue sources and lower receipts earned than expected, the General Funds transfer for capital bond debt service continues to grow.

The following chart shows the General Funds cost of debt service paid on the State’s General Obligation bonds, both capital and pension related, for FY2011 through FY2015. 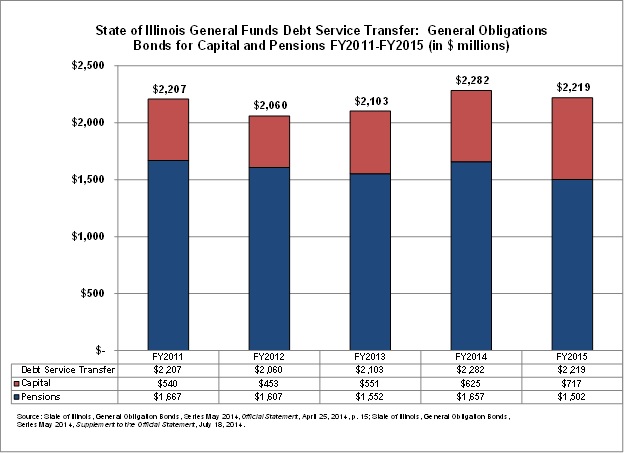 The amount in the table above only represents the General Funds transfer for annual debt service. The total principal and interest amounts due to investors for all outstanding State bonds totals $3.9 billion in FY2015. The State also funds capital purpose bonds through transfers from the Road Fund, Capital Projects Fund, School Infrastructure and State Construction Fund, in addition to the General Funds.

The Capital Project Fund revenues have not yet produced the funding levels projected when Illinois Jobs Now! was originally approved. In FY2014 revenues earned in the Capital Projects Fund totaled $734.0 million and are projected to total $765.6 million in FY2015. The legislative projections provided when the spending was approved in FY2010 anticipated $943 million to $1.2 billion in new revenues beginning in FY2012.

The following table shows the revenues deposited into the Capital Projects Fund from FY2010 through FY2014 and the estimated revenues for FY2015 compared to the original legislative projections of annual revenue by funding source.

The largest shortfall in revenues is related to the delay in implementing and taxing legalized video gaming, which was the largest single source of revenues in the approved funding package. Due to administrative delays, the first machines were not put into service until October 2012. Fiscal year 2013 was the first year that the capital budget received revenue from the 30% tax on video gaming. Under the law establishing legalized video poker, five-sixths of the tax revenues generated are used for capital project funding and the remainder given to local governments to help address adverse social effects of gaming.

The estimated FY2015 video gaming revenue totaling $167.6 million is well below the projection of $288 million to $534 million annually. This is largely due to the ability of local governments to opt out of video gaming or to continue existing local bans on the machines.

Although video gaming revenue accounts for the largest shortfall in capital funding, as shown in the table above, all other sources of capital projects revenue except liquor taxes continue to fall short.

For more details and the data citations for the information included in this blog see the full State of Illinois FY2015 Enacted Budget Analysis available here.