What Would it Mean to Shift More Illinois Teacher Pension Costs to School Districts?

Illinois Senate President John Cullerton has recently suggested that school districts should begin contributing a larger share of the employer contribution to the Teachers’ Retirement System of the State of Illinois. President Cullerton noted that this change would relieve some of the financial pressure on the State, which has borrowed to make its pension payments for the past two years. He has also stated that it would lead school districts to more carefully consider the effects of their teacher salary negotiations on pension costs and would more closely resemble the pension funding model of the Chicago Public Schools, which receives relatively little State assistance in funding its pension plan.[1]

The Teachers Retirement System (TRS) is a cost-sharing multi-employer defined benefit pension plan for all full-time, part-time and substitute certified public school teachers in Illinois except those who work for the Chicago Board of Education. Chicago Public Schools teachers are members of the separate single-employer Chicago Teachers’ Pension Fund.

TRS is one of the five public retirement systems funded by the State of Illinois. It is the largest of the State pension funds, with 170,275 active members and 97,754 annuitants and beneficiaries receiving benefits. Over $3.9 billion in benefits were paid to annuitants and beneficiaries during FY2010.[2] As of June 30, 2010, TRS had $32.3 billion in assets (market value)[3] and nearly $77.3 billion in accrued liabilities, resulting in total unfunded liabilities of $46.0 billion and a funded ratio of 40.5%. TRS’ unfunded liabilities represent 53.7% of the State’s total $85.6 billion in unfunded pension liabilities (at market value). 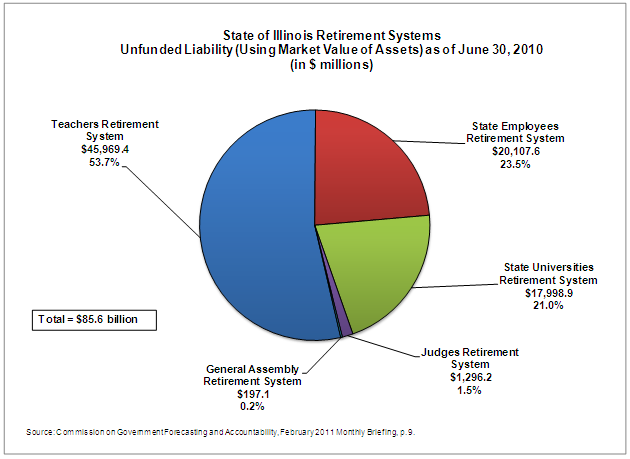 Employee members of TRS contribute 9.4% of their pensionable salary to the pension fund. In FY2010 employee contributions totaled $899.4 million.[4] Members may also make additional contributions in order to purchase service credit or to retire with Early Retirement Option benefits if eligible.[5]

Employer contributions are made primarily by the State of Illinois, with smaller contributions made by school districts and the federal government for federally-funded positions. The calculation of these contributions is complex (see the actuarial valuation) but in general, school districts contribute 0.58% of pensionable teacher payroll, plus any additional payments required for members who retire with excessive sick leave credit, Early Retirement Option benefits or salary increases over 6% used in the final average salary calculation.[6] The State’s share of the contribution is calculated as the amount needed to bring the TRS funded ratio to 90% by the end of the year 2045, projected as a level percent of payroll each year. The State’s cost for the TRS portion of debt service on pension obligation bonds issued in 2003 is subtracted from the amount the State is required contribute. The pension contribution for teachers supported by federal grants is made from those grants at the same payroll rate as the State contribution. The graph below shows the contributions made by the State, employees, school districts and federal funds between FY1995 and FY2010. The State and employees make the bulk of contributions to TRS. 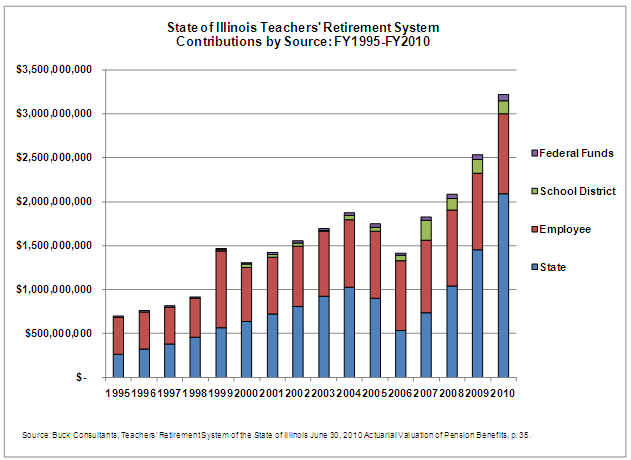 President Cullerton has suggested that school districts be responsible for the “normal cost” of pensions while the State would continue to be responsible for paying down the unfunded liability created by decades of inadequate contributions. “Normal cost” is an actuarially-calculated amount representing that portion of the present value of pension plan benefits and administrative expenses which is allocated to a given valuation year (see the Civic Federation’s Status of Local Pensions report for more detail). “Normal cost” typically refers to the employer’s remaining cost after employee contributions are taken into account. The TRS employer normal cost for FY2011 was calculated by the actuaries at $849.7 million, or 8.77% of payroll, while the portion of the total employer contribution required to amortize the unfunded liability was $1.4 billion, or 16.92% of payroll. [7] These amounts are calculated using actuarial assumptions and a complex formula needed to project the contribution schedule needed to reach 90% funded in 2045.

If school districts had been required to make the full employer’s normal cost contribution in FY2011 it would have shifted roughly $800 million in costs from the State to school districts depending on how the federal portion of the pension payment was allocated. President Cullerton has stated that the change would be phased in over time if implemented.

An interesting effect of the State’s 50-year projected employer contribution schedule is that the employer’s normal cost actually declines over time while the amortization payment increases dramatically. This is because the schedule allows the unfunded liability to continue to grow until approximately the year 2033[8] and assumes that employee contributions will continue to be a flat 9.4% of payroll.  Employer normal cost even becomes negative in 2036 because employee contributions will be sufficient to cover the total normal cost. Public Act 96-0889 created a reduced tier of pension benefits for new employees but did not reduce the employee pension contribution, so as more employees enter and retire from the new benefit tier their contributions alone will exceed normal cost. 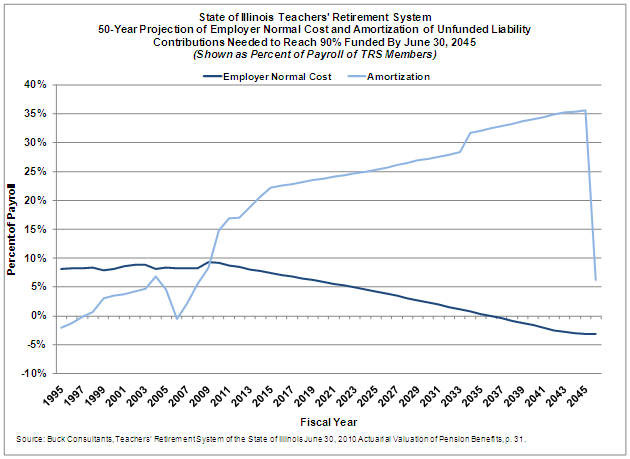