CPS is balancing its budget in FY2015 in large part by shifting the time period used to report revenues from 30 to 60 days. This will allow the District to access $648.0 million in revenues that it would not otherwise have been able to use. However, this is a one-time maneuver that cannot be repeated in FY2016.

Governments report financial transactions for their governmental funds using the modified accrual method of accounting. This method allows revenues to be recorded when the organization can report an inflow of resources, even if those revenues have not yet been received in the current fiscal year. More specifically, if taxes are owed to a government and are “measurable and available” they can be recorded even if cash has not yet been received. In this situation, “available” means that the taxes will be collected in or shortly after the end of the fiscal year. In practice, local government property taxes collected up to 60 days after the close of the fiscal year are commonly recorded as being “measurable and available” in the preceding fiscal year.

With its FY2015 Budget, CPS Extended its Revenue Recognition Period to 60 Days

Why Did CPS Change its Revenue Recognition Period to 60 Days?

Up until July 1, 2012, the 30-day revenue recognition period had little effect on the District’s finances because little to no property tax revenue was received in July.

In 2012, however, Cook County, which administers the property tax system, sent the second installment tax year 2011 property tax bills out on time for the first time in over 30 years, with a due date of August 1, 2012. Consequently, between July 1 and July 30, 2012, the District collected $244 million in property tax revenues. Because this revenue was collected during the District’s 30-day revenue recognition period, the revenue was recorded in FY2012 rather than in FY2013, the fiscal year for which it had been budgeted. Since the property tax revenue had been expected in FY2013, it was not budgeted for and thus not needed for the FY2012 budget. These revenues, along with some earlier than expected State payments, left the FY2012 year-end audited General Fund with $350 million of unexpected additional fund balance. This revenue was carried over as budgetary reserve funds that were later used to close the FY2014 budget deficit.

As long as Cook County property tax bills are sent out on time, CPS will now collect hundreds of millions of dollars in revenues between July 1 and August 29. Based on the assumption that that this will continue to be the case, the District then made the decision to extend its revenue recognition period to 60 days to be able to access revenues collected in that period in the prior fiscal year.

It is important to note that other local governments and school districts have a 60-day revenue recognition policy and there are valid accounting reasons for CPS to change its policy.

What is the Impact of the Extension of the CPS Revenue Recognition Period to 60 Days?

The CPS policy change from a 30-day to a 60-day revenue recognition period requires the restatement of FY2014 revenues in the District’s FY2015 audit in order to reflect the shift in recognizing revenue starting on August 30 and ending with August 29. In the FY2015 financial statements, the result will be that the restated FY2014 revenue will include August 30, 2013 – August 29, 2014. However, this has the effect of “orphaning” August 2013 revenues, which will then be accounted for as beginning fund balance in FY2014. The complicated accounting process by which this happens is illustrated below. 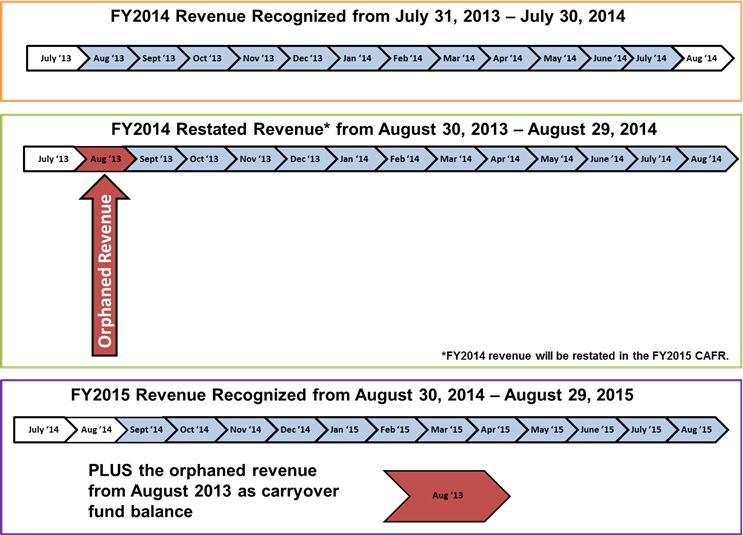 As can be seen above, August 2013 revenues, including $616.2 million in property tax revenues, will be essentially orphaned. As FY2013 (still covered under the 30-day policy) only counted revenue through July 2013 and because FY2014 will need to be restated for the 60-day policy and thus will only count revenue beginning in August 30, 2013, the revenue collected in August 2013 will be added to the reserves available at the beginning of FY2014. However, since expenditures will be complete at the time of the FY2015 audit, the revenue from August 2013 will not be necessary to cover FY2014 deficit. This means that the reserves will flow through to the end of FY2014 and will be made available for the FY2015 budget.

As CPS readily admits in the District’s FY2015 budget book, the revenue recognition change is “a one-time fix that will allow us to close the FY 2015 budget gap, but does not address our underlying fiscal challenges.”[2]  Indeed, the continued appropriation of significant portions of fund balance and particularly the use of restricted fund balance to maintain operating expenses is a serious cause for concern. With the depletion of reserves, the use of fund balance will not be a viable option for closing future budget gaps and contributes to the District’s projected FY2016 budget gap of nearly $1.2 billion.[3]

CPS cannot extend its revenue recognition period again to generate significant amounts of one-time resources in FY2016 or future years. This is because property tax bills are due August 1 and therefore little property tax revenue is received between August 30 and September 28th.[4]