One year after passing the Illinois General Assembly, a bill that puts the City of Chicago’s Police and Fire pension funds on a 40-year plan to reach 90% funding has become law. Illinois Governor Bruce Rauner vetoed the legislation after it was sent for his consideration on March 31, 2016, but the General Assembly voted to override the veto. Senate Bill 777 (now Public Act 99-0506), reduces by $220 million the first year of pension contributions Chicago would have been required to make under a previous 25-year, 90% funding plan that went into effect in tax year 2015,[1] but significantly increases funding from the previous statutory level.

Until tax year 2015, the City of Chicago’s statutorily required employer contributions to its Police and Fire funds have been based upon a multiple of what employees contributed two years prior. For the Police fund, the multiple was 2.0 and for the Fire fund it was 2.26. These multiplier contributions do not adjust according to the actual cost of providing the benefits, so even though the City has made its required contributions under State law, they have been insufficient for the actual financial needs of the funds for many years. As a result of underfunding as well as investment losses, the funded ratios of the public safety funds have fallen precipitously in the past decade to 26.0% for the Police fund and 22.7% for the Fire fund, both calculated on an actuarial basis for fiscal year 2014, the most recent data released by the funds.

In December 2010 the Illinois General Assembly passed and then-Governor Quinn signed legislation (Public Act 96-1495) that created a new tier of pension benefits for public safety employees in Illinois hired on or after January 1, 2011, including Chicago police and firefighters. The legislation also significantly changed the City of Chicago’s employer contributions to the Police and Fire Funds starting in tax year 2015. The statutory schedule required an increase in funding of over $500 million with a goal of a 90% funded ratio by 2040, a 25-year funding plan. The legislation also required downstate and suburban police and fire pension funding to reach 90% by FY2040, but the change was not as significant since those funds were then already on a statutorily required 40-year plan to reach 100% funding starting in 1993.[2]

Mayor Emanuel had long said that Chicago taxpayers could not afford such an extraordinary increase to Police and Fire contributions without negotiating reforms to pension benefits that decrease their cost. However, after the Illinois Supreme Court ruled in May 2015 that a state pension benefit reform package for current employees and retirees was unconstitutional, the City instead announced in bond documents that it was negotiating with its public safety unions to moderate the spike in its pension payments. Since pension benefits and funding are controlled by Illinois State law, any change to the funding program must be implemented through legislation in the Illinois General Assembly.

Senate Bill 777 lays out five years of steadily increasing payments by the City to the public safety funds until it reaches a level where it starts to contribute enough to raise the funded level to 90% over 35 years for a total 40-year funding plan. The amount the City must contribute each year to each fund between FY2016 and FY2020 is specified in dollar amounts in the legislation. Projections of the contributions that will be made under the actuarial calculations in budget year 2021 (tax year 2020) and beyond have not been made available, though they are expected to be included in the funds’ FY2015 financial statements, which will be released sometime in the next few months.

The City of Chicago based its revised FY2015 and approved FY2016 budgets and property tax levies on the funding schedule laid out in Senate Bill 777, instead of the 2010 funding law. If Senate Bill 777 had not become law, Chicago would have been forced to come up with $220 million more during 2016 in order to make the higher required contribution under Public Act 96-1495. The City borrowed $220 million on a short-term basis earlier this year in order to show it could make a higher payment and deposited the money with the Treasurer of the City of Chicago, as required by State law. Now that Senate Bill 777 has gone into effect, the borrowing will be terminated.

While it is important that all of the City of Chicago’s four public pension funds receive more funding, the way Senate Bill 777 increases funding is not ideal from an actuarial perspective. As the Civic Federation noted in a blog about Senate Bill 777 last year:

“It is important to note that since the City’s contributions in FY2016-FY2020 are laid out in statute, they will not adjust should the funding needs of the pensions change due to lower than expected investment returns or other deviations from actuarial expectations. City officials have said that the amount of funding in the five-year ramp is sufficient to increase the funded ratios of the pension funds over each of those years. However, if the fund experiences unfavorable results in the next five years compared to actuarial expectations, contributions would not compensate for those changes during the ramp and could possibly lead to a fall in funding levels.”

In Fiscal Year 2014, both the Police and Fire pension funds experienced such deviations from actuarial expectations. Both funds had investment returns less than expected and the Police Fund lowered its expected annual rate of return on investment to 7.5% from 7.75%. While this move puts the Police Fund more in line with other pension funds in the Chicago area and nationally, it also has the effect of increasing unfunded liabilities and the amount of funding the pensions need in the near term. (The Civic Federation has written extensively in recent years about how changes to expected rates of return impact pension funds.) 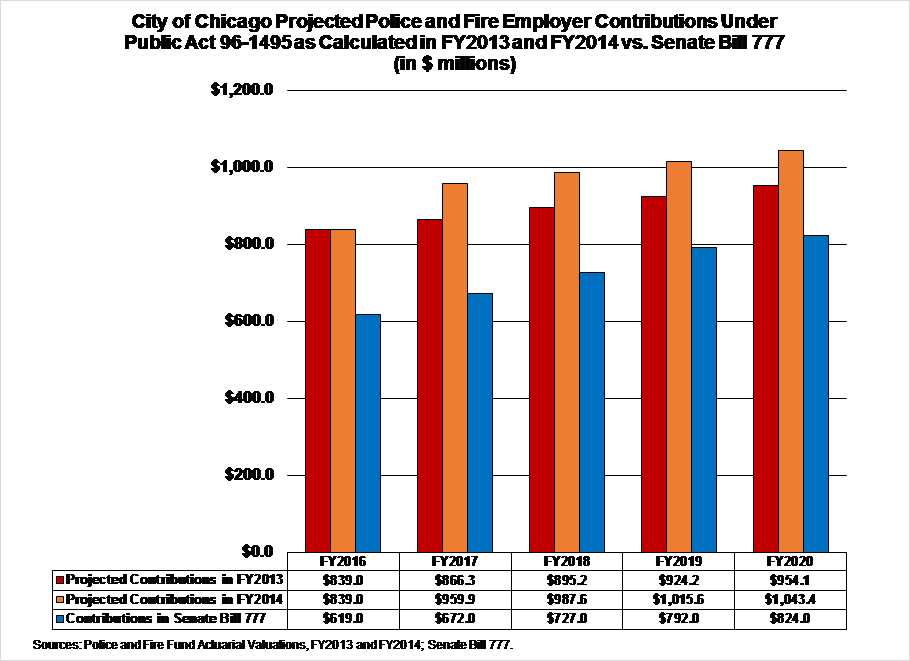 The Federation looks forward to seeing projections of the impact of increased funding under Senate Bill 777 on the Police and Fire funds. The Chicago City Council approved increased property tax levies through 2018 and dedicated the funding to Police and Fire pension contributions. While the increased funding will undoubtedly help the funds, it remains to be seen whether the contributions will be sufficient to improve or even maintain their funding levels. Additionally, once the City hits the end of the ramp, it will be important to know how big of an increase in funding will be required to start making actuarially-based payments that will increase funding levels to the 90% required by 2055 and to plan for what might be another large increase.

Neither the previous statutory payment schedule allowing the City 25 years to reach 90% funded nor the payment schedule under Senate Bill 777 allowing 40 years to reach 90% funded with a five-year ramp are best practice funding schedules from an actuarial perspective. There is no best practice for an acceptable funded ratio other than 100%.[3] It is additionally important for all stakeholders to recognize that stretching payments out over 40 years means pushing more of the cost of today’s employees and retirees onto tomorrow’s taxpayers. All stakeholders should be encouraged to examine the impact the new funding schedule is having each year and be prepared to adjust accordingly.