After a yearlong stalemate, the State of Illinois finally saw a crack in its ongoing budget impasse on the last day of the fiscal year. The General Assembly rushed approval of bills authorizing a full year of preschool through high school education funding, including additional assistance for the Chicago Public Schools, along with a partial spending plan for other government services to cover some FY2016 and FY2017 costs.

The stopgap budget bills were passed and signed into law immediately in order to keep funds flowing in the new fiscal year, which began July 1. Approval of the stopgap budget signaled a reprieve from the political stalemate between Illinois’ Republican Governor and Democratic legislators who control the General Assembly that had blocked the enactment of an FY2016 budget and threatened to leave the State without a budget for a second year.

Democratic leaders have pushed for a bipartisan agreement on additional revenues to help close the budget gap caused by the partial rollback of temporary income tax rate increases in January 2015. Governor Bruce Rauner has said he would only agree to higher taxes in conjunction with passage of key elements of his Turnaround Agenda, which is intended to make Illinois more appealing to businesses.

By approving the FY2017 education appropriation, the Governor and General Assembly ensured that schools across the State could open on time this fall and provided additional $523.6 million in funding from State resources.

Human services, higher education and government agency operations, which have had little or no funding in FY2016, received appropriations to pay for FY2016 expenses and for the first half of FY2017. Besides education spending, most of the appropriations end by December 31, 2016.

Although the stopgap budget authorizes funding for many struggling areas of State government, it is far from a complete budget. Human services grants and programs receive $667 million, which represents 65% of the total funding needed to complete the FY2016 budget and fund the first half of FY2017, according to legislative reports.

Illinois has been sued for breach of contract by a group of 82 social service providers who are allegedly owed more than $130 million for work that has been performed but not paid for on State contracts dating back to July 1, 2015. Other agencies have provided services without contracts.

No General Funds payments have been made for group health insurance in FY2016 and those appropriations are not included in the FY2017 stopgap budget. As a result, the backlog of unpaid health insurance claims stood at $3.3 billion at the end of May 2016. Without the addition of considerable resources this backlog will grow substantially in FY2017. The Governor’s recommended FY2017 budget estimated the General Funds cost at $1.81 billion, which the Governor hoped to reduce to $1.37 billion through labor negotiations. However, those talks have not yet resulted in an agreement with the State’s largest union. Group health insurance costs must be paid eventually due to State law and existing collective bargaining agreements.

Most of the State’s General Funds spending for FY2017 is not accounted for in the appropriations but will continue to be provided through consent decrees, court orders and existing statutory requirement. This includes Medicaid, employee salaries, State pension contributions and debt service. All of the appropriations in the stopgap budget are in addition to the State’s compelled spending.

To help fund the spending plan without passing a substantial tax increase, the State approved several one-time revenue measures. As proposed in the Governor’s FY2017 budget, the State will forgo repayment of approximately $450 million of interfund borrowing and spend down the entire balance of $276 million in the Budget Stabilization Fund, Illinois’ only rainy day fund.

The State hopes to reduce its debt service by $20 million through a $2 billion refinancing of its outstanding debt. To achieve these savings several provisions of the current General Obligation Bond Act were suspended for FY2017 including the level principal repayment rule and the prohibition on extending the life of principal debt beyond its original maturity. Details on the structure of the refinancing or how the savings are generated were not specified in the refunding bond authorization, which also included $2 billion of bonds for capital purposes.

General Funds resources were increased in FY2017 by approximately $150 million through a new assessment on hospitals that will pay for Medicaid costs that would have otherwise relied on the State’s operating resources.

To fund part of the higher education budget, the State appropriated $97.1 million from Personal Property Replacement Tax (PPRT) proceeds. This fund allocation will reduce the amount that would otherwise be distributed via formula to local governments, which usually totals roughly $1.4 billion annually. With the addition of the PPRT resources higher education spending will receive approximately $1.0 billion in funding compared to $600 million provided at the end of FY2016. This is still significantly less than the $1.9 billion spent on higher education in FY2015 and the $1.7 billion proposed in the Governor’s recommended FY2017 budget. The funding is also available to pay for FY2016 costs.

As previously discussed here, education funding was a major sticking point in the budget negotiations. The enacted budget legislation, Public Act 0524, includes a full-year FY2017 appropriation of $5.1 billion for General State Aid (GSA), the State’s main spending program for elementary and secondary education. That amount is $361.4 million above the $4.7 billion appropriated in FY2016 and $306.1 million higher than the $4.8 billion in the Governor’s recommended FY2017 budget.

The enacted GSA funding is intended to ensure that no school district receives less money in FY2017 than in the previous year. It also includes $250 million for schools with high concentrations of low-income students. The cash-strapped Chicago Public Schools will receive an additional $102.5 million in GSA in FY2017, according to the Illinois State Board of Education.

Another component of the budget package requires the State to pay the normal cost (current service cost) of $215.2 million for Chicago teachers’ pensions in FY2017. However, that amount is not due until June 1, 2017, and the payment will only be made if the Governor and legislature reach agreement on pension reform legislation. In FY2016 the State is scheduled to make total contributions of $3.7 billion to the Teachers’ Retirement System (TRS), which covers teachers outside of Chicago, while paying $12.1 million for Chicago teachers’ pensions.

The Governor and legislature also agreed on a measure that would allow CPS to levy a special property tax to pay pension costs. That tax, at a rate of 0.383%, would generate about $250 million per year.

The following table shows appropriations from General Funds and from a new account called the Fund for the Advancement of Education. Since February 2015, 1/30 of net income tax revenues from individuals, trusts and estates has been diverted from General Funds into this account to be used for education. 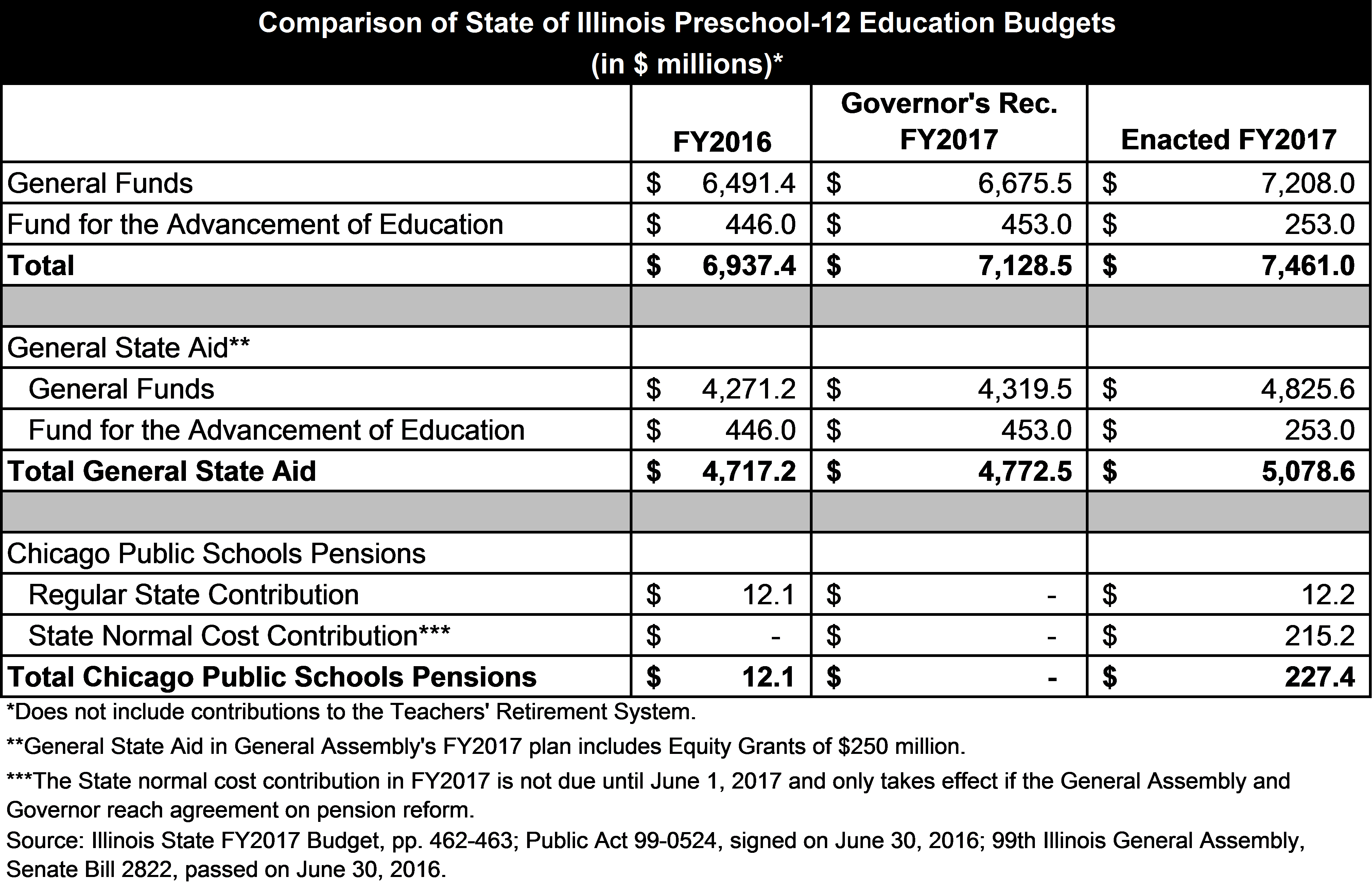 The State’s capital budget, spending from other State funds and federal funds for all of FY2017 were included in the stopgap appropriations bill.

In addition to the budget bills, as part of the negotiations the City of Chicago was granted a broad new redevelopment authority. The City will now be able to apply tax increment financing to areas linked to the Chicago Transit Authority’s Redline in order to fund expansion and improvements to the system.  Mayor Rahm Emanuel said the new transit oriented development district will allow the City to access $800 million in new federal funds for the CTA.