On December 11, 2013, the City Council approved an ordinance to establish the City Council Office of Financial Analysis (COFA), modeled on the independent agencies established in the cities of New York, San Diego and Pittsburgh. The Civic Federation commends the City Council, legislation sponsors Alderman Ameya Pawar, Alderman Michelle Smith and Alderman Pat Dowell, Budget Committee Chairman Carrie Austin and Mayor Rahm Emanuel for working together to give the City Council the tools and resources it needs to be a more effective steward of the City’s finances. Such an office is essential to evaluate the complex budgets, privatization proposals and ratings agency actions that have had major financial impacts on the City’s operations in recent years.

The Federation has long recommended the creation of a policy analysis office, including in its 2011 roadmap Recommendations for a Financially Sustainable City of Chicago. The Federation previously discussed the original proposed ordinance in a blog when it was first introduced to the City Council last year and published a position statement supporting the current legislation.

The approved legislation amends Title 2 of the Municipal Code to create an office that will provide City Council with financial analysis on the annual budget that is independent of the Mayor’s budget staff. COFA will also assist aldermen with an annual budget options report of potential cost savings and efficiencies, as well as analyses of proposed legislation involving public-private partnerships, including those under the Chicago Infrastructure Trust, asset leases and sales, ratings agency actions and other analyses per the request of the Budget Committee Chairman.

According to the legislation, COFA is authorized to obtain data, records, reports, estimates and statistics from any officer, employee, department, agency, contractor, subcontractor and licensee of the City unless they are protected by legal privileges. Such data collected by the office and used in the preparation of any report would be available to aldermen, city officials or department heads if requested.

Although there was some disagreement among council members as to how the office should be funded, the legislation was approved without dissent. Funding for the office comes partly from a $3,000 reduction in the aldermen’s expense accounts. The independent budget office was supported by Mayor Emanuel who recommended that the office be created with a budget of approximately $283,924, excluding personnel-related benefit costs like pensions and healthcare. Sponsors of the legislation plan to amend the FY2014 Appropriations Ordinance to increase the office’s budget to $485,000 including benefit costs. Changes to the Mayor’s budget proposal include increasing the City Council Financial Analyst’s salary and adding two research fellows to the staff. The following is the COFA FY2014 budget, as proposed by the legislation’s sponsors: 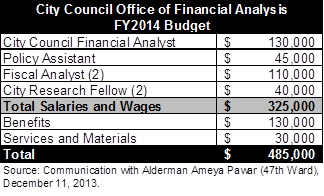