The Civic Federation released its annual analysis of the City of Chicago’s proposed budget this week. Included in the report was a section dedicated to the budgetary impact of the City’s four pension funds and evaluating trends in their funded status. This blog post reproduces that chapter for readers who might not otherwise see it.

Pensions in the FY2022 City of Chicago Budget

The City of Chicago’s four pension funds are severely underfunded. A combination of statutory underfunding, benefit enhancements, investment losses, optimistic assumptions and other long-term problems have all contributed to their abysmal financial condition. Benefits for new employees were reduced in 2011 along with most other public pension plans in the State of Illinois, but subsequent attempts to reduce benefits for current employees in order to shore up the funds’ financial condition were struck down by the Illinois Supreme Court.[2] City and State leaders subsequently turned to changing statutory funding laws in an attempt to prevent the funds from becoming insolvent.

Since 2016 the City of Chicago’s four pension funds have been transitioned by State law to 40-year funding plans that start with five-year ramps of growing annual contributions set by state statute and a subsequent transition to a 35-year schedule of actuarially calculated contributions to increase their funded ratios to 90%. The Police and Fire funds started their ramps in FY2015 and transitioned to actuarially-calculated funding in FY2020 and the Municipal and Laborers’ funds started their ramps in FY2017 and will transition to actuarially-based funding in FY2022. Since all four funds in the future will be funded on an actuarially-calculated basis, annual contributions from the City will adjust according to the financial needs of the funds, but the length of the funding schedule and backloaded nature mean that the City will not make contributions sufficient to reduce the unfunded liability until the 2030s.[3]

The FY2022 total contribution to the City’s four pension funds is $2.3 billion, as shown in the following chart. The two largest funds, the Municipal and Police Funds, receive the largest portion of the annual funding at 77% or nearly $1.8 billion. 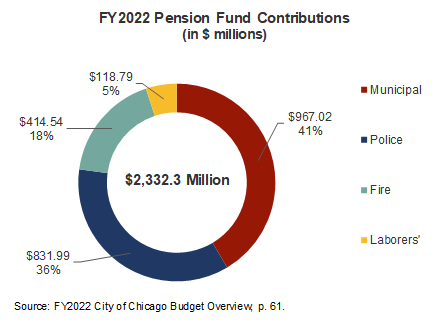 The City of Chicago uses several revenue sources to make its pension contributions: property taxes, contributions from the Corporate and Enterprise funds, a dedicated water and sewer tax for the Municipal Fund and other sources. The following charts show the breakdown of those sources for each fund. The property tax is the single largest source of revenue for the pensions at $1.4 billion or 60% of total pension funding. 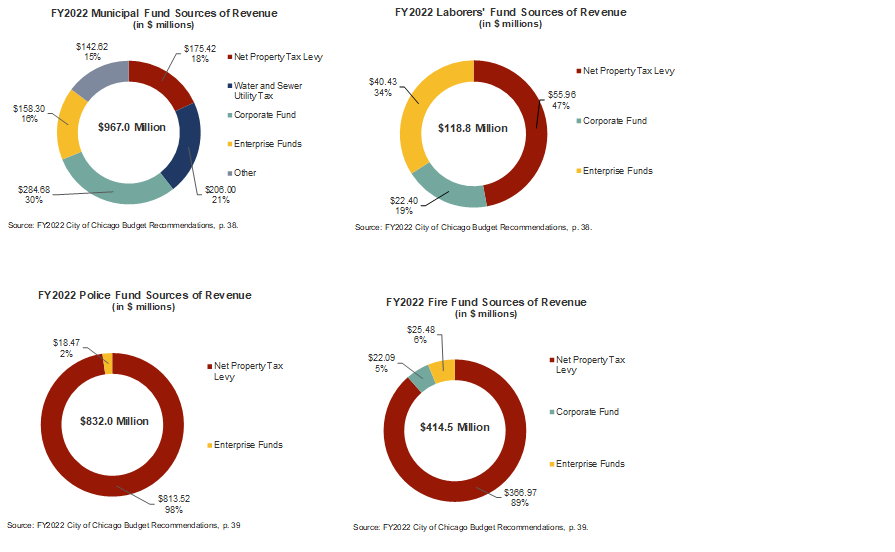 Prior to the implementation of the 40-year funding plans, the City’s pension funds were funded on a multiple of what employees contributed two years prior, which did not adjust according to each fund’s actuarial funding need. As shown in the following chart, prior to the transition of the funding schedule, pensions made up $478.3 million or 6.8% of the City’s spending in FY2014. However, the following year that increased to $885.7 million or 11.6% as the City started its ramps for the Police and Fire funds. The percentage of the budget going to pensions has increased over the following years to 22.0% in FY2022.[4] 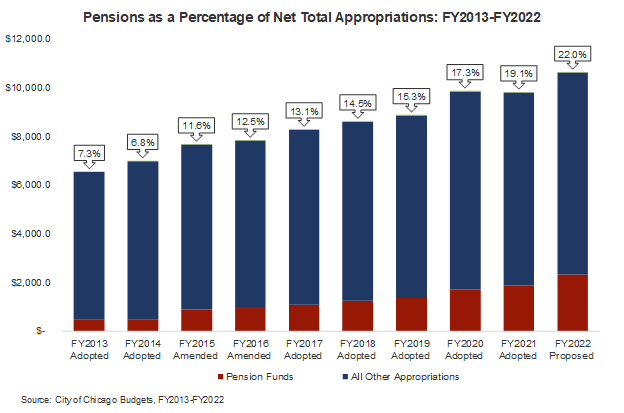 In order to analyze how far short of sufficient past years’ contributions have been, it is useful to compare the City’s actual contributions to an objective measure of how much the City would need to contribute in order to pay off its unfunded liability over a set period of time. That measure, the Actuarially Determined Contribution (ADC), is a reporting requirement of the Governmental Accounting Standards Board and is reported in each pension fund’s annual actuarial reports.[5] 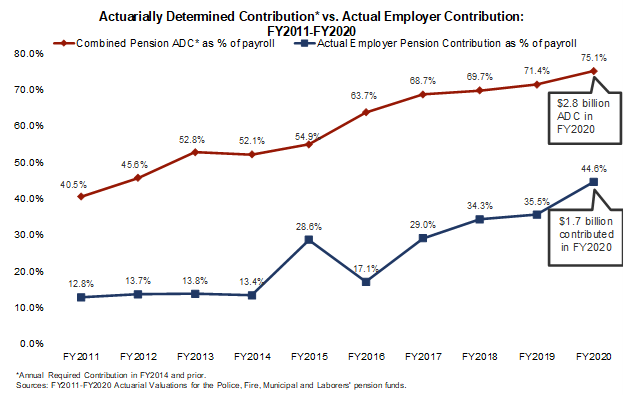 In FY2020 there were 50,898 employees participating in the four pension funds. The Municipal Fund constitutes 61.0% of total active employee membership. However, roughly half of the 31,051 active Municipal Fund members are not City employees, but rather are non-teacher employees of Chicago Public Schools. Approximately 57.9% of all active members of all four pension funds belong to Tier 1 and 42.1% belong to Tier 2 or 3. The Municipal Fund has the highest percentage of non-Tier 1 members with approximately 46.7% and the Laborers’ Fund has the lowest with approximately 30.5%.

The following chart shows the percentage of active members in each fund. 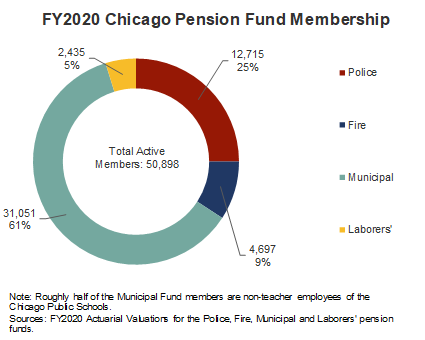 Every fund except the Municipal Fund has more annuitants and beneficiaries than active employees. The ratio of actives to annuitants ranges from 0.65 in the Laborers’ Fund to 0.90 and 0.91 for the Fire and Police Funds to 1.21 for the Municipal Fund. A low ratio of active employees to annuitants means there are fewer employees paying into the fund and more retirees taking annuity payments out of the fund and can be a signal of distress for a mature and underfunded pension like the four Chicago funds.

Funding Status of the City of Chicago’s Pensions

Funded Ratio: The most basic indicator of pension fund status is its ratio of assets to liabilities, or “funded ratio.” In other words, this indicator shows how many pennies of assets a fund has per dollar of liabilities. For example, if a plan had $100 million in liabilities and $90 million in assets, it would have a 90% funded ratio and about 90 cents in assets per dollar of obligations to its employees and retirees.

When a pension fund has enough assets to cover all its accrued liabilities, it is considered 100% funded. This does not mean that further contributions are no longer required. Instead it means that the plan is funded at the appropriate level at a certain date. A funding level under 100% means that a fund does not have sufficient assets on the date of valuation to cover its actuarial accrued liability.

Investment Rate of Return: A pension fund invests the contributions of employers and employees in order to generate additional revenue over an extended period of time. Investment income provides the majority of revenue for an employee’s pension over the course of a typical career. In addition to the actual annual rate of return, the assumed investment rate of return plays an important role in the calculation of actuarial liabilities. It is used to discount the present value of projected future benefit payments and has been the subject of considerable debate in recent years.[6] The assumed rate of return for the four Chicago pension funds ranges from 6.75% for the Police and Fire funds to 7.0% for the Municipal Fund and 7.25% for the Laborers’ Fund.

Other major contributors to a pension fund’s financial status in addition to employer contributions and investment returns are benefit enhancements and changes to actuarial assumptions. In past years, the funds’ reductions to their expected rate of return on investment has been a major source of increases to the unfunded liability. In 2021 a major benefit enhancement for Chicago firefighters was enacted in Springfield that extended a larger automatic annual increase to annuities to younger firefighters. The effective date of Public Act 101-0673 was April 5, 2021 and the changes will be accounted for in the FY2021 actuarial valuation.[7] 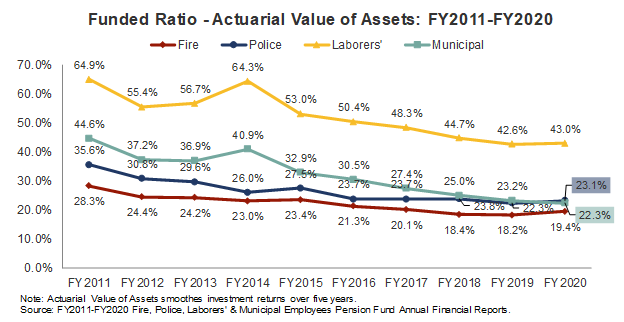 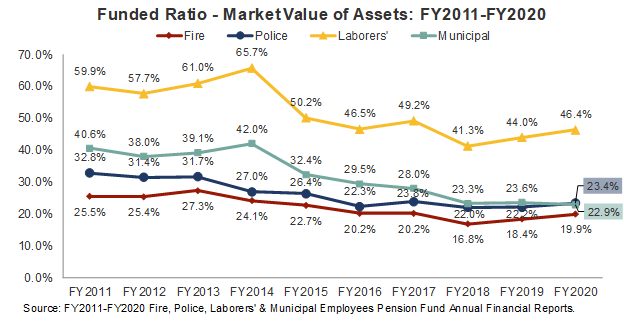 A summary of the ten-year changes in unfunded liabilities by fund is shown below: 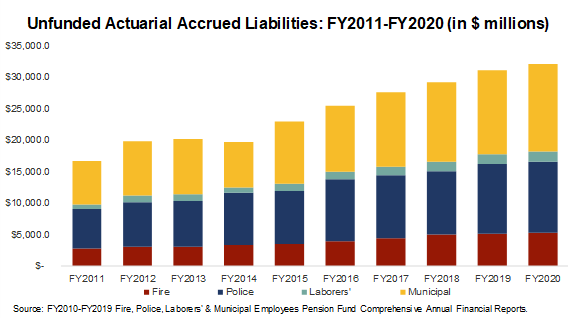 In FY2020 all four City pension funds experienced returns greater than their expected rates of return on their investments, ranging from 8.9% for the Police Fund to 14.9% for the Laborers’ Fund.[9] As noted above, the FY2020 investment assumption for the Police Fund was 6.75%, the Fire Fund rate of return was 6.75%, the Laborers’ Fund was 7.25% and the Municipal fund was 7.0%. 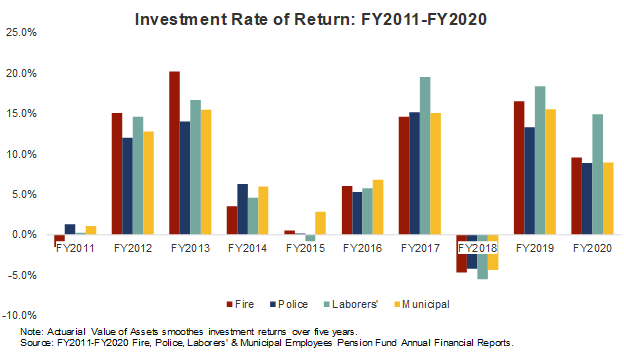 [5] To read more about the Actuarially Determined Contribution and how it is similar and differs from a previous measure, the Annual Required Contribution (ARC), see the Appendix.

[6] For a short description of the debate see Thomas J. Healey, “Commentary: A note on the discount rate,” Pensions and Investments, October 8, 2019. Available at https://www.pionline.com/industry-voices/commentary-note-discount-rate.

[9] The Civic Federation calculates investment rate of return using the following formula: Current Year Rate of Return = Current Year Gross Investment Income/ (0.5*(Previous Year Market Value of Assets + Current Year Market Value of Assets – Current Year Gross Investment Income)). This is not necessarily the formula used by the pension funds’ actuaries and investment managers; thus investment rates of return reported here may differ from those reported in a fund’s actuarial statements. However, it is a standard actuarial formula. Gross investment income includes income from securities lending activities, net of borrower rebates. It does not subtract out related investment and securities lending fees, which are treated as expenses.