The City of Chicago recently released its Budget Forecast for FY2021, which provides financial estimates for the City’s current fiscal year that ends on December 31, 2020 and a forecast for the next fiscal year and following two years.

This is the second forecast produced by Mayor Lori Lightfoot’s administration since she took office in May 2019. Under the previous mayoral administration, the City produced an Annual Financial Analysis that was required by executive order to be released by July 31st each year. Mayor Lightfoot issued Executive Order No. 2019-3 that requires a financial forecast be released no later than August 31st of each year. The forecast includes a general economic outlook, year-end estimates of revenues and expenditures, a three-year forecast, a summary of reported pension liabilities, an overview of the Tax Increment Financing (TIF) program, a summary of outstanding debt and an analysis of reserves. In addition, this year’s forecast includes a supplemental section that provides a greater level of information about the revenue assumptions used to develop the forecast. The City again provided a budget forecast summary available in multiple languages and is seeking input from the public through a budget town hall survey to better guide the City as it works to address its financial challenges. The Mayor’s administration and members of the city council also held a series of virtual town hall meetings to gain input from residents on various budget topics.

The City of Chicago is required by state law to produce a balanced budget annually for the fiscal year that begins on January 1. Entering FY2020 the City of Chicago faced a Corporate Fund deficit of $838 million. Through a number of savings, efficiencies and revenues, such as using savings from the refinancing of debt, negotiating increased ambulance reimbursement rates and increasing targeted taxes on ridesharing customers, the City was able to close the budgetary gap between revenues and expenditures and adopt a balanced budget. However, in March 2020 the coronavirus pandemic caused a near shut down of the economy when Governor Pritzker and Mayor Lightfoot issued stay-at-home orders. This and the continuing economic dislocations after the end of the order have caused a severe decline in revenues and the City now projects that FY2020 year-end expenditures in the Corporate Fund will exceed revenues by $798.8 million.

Corporate Fund revenues for FY2020 are estimated to end the year at $3.53 billion. This is $886.6 million, or 20.1%, below the originally budgeted revenues of $4.41 billion. The decline in revenue is primarily due to the impact COVID-19 has had on the economy, with the greatest impact on local tax revenues, such as transportation, business, recreation and utility taxes.[1] Corporate Fund expenditures are estimated to be $4.33 billion, which is $87.8 million, or 2.0%, lower than originally budgeted expenditures of $4.42 billion. This is primarily due to the City paying $71.1 million in anticipated settlements and judgments with bond proceeds from 2016 rather than paying those costs out of the Corporate Fund.[2] The table below compares the adopted FY2020 budget to FY2020 year-end estimates.

Beginning an effort to close the current fiscal year’s revenue shortfall of nearly $800 million, the City has identified approximately $500 million in savings and reimbursements, according the 2021 forecast. This includes $300 million in reimbursements from the federal government for COVID-19 related personnel costs and $200 million in potential savings from debt refinancing. The forecast notes that the City will continue to identify additional savings and efficiencies, but may also resort to cuts in programs and services, employee furloughs or layoffs and other measures to ensure the City ends the current fiscal year with a balanced budget.[3] However, at the same time the Mayor and City Council must begin to identify ways they will close the upcoming fiscal year’s projected Corporate Fund budget gap of $1.2 billion.

In its forecast, the City projects a FY2021 budget gap of $1.2 billion in the Corporate Fund, the City’s general operating fund. This is the gap that the City’s FY2021 budget will need to close through some combination of efficiencies, budget cuts and revenue increases. Of the $1.2 billion gap, the City attributes $783.2 million to revenue loss due to COVID-19 and $383.1 million to anticipated increases in expenses related to personnel, pension and debt.[4]

The chart below shows changes in the initial projected budget deficit since 2010. Between FY2008 and FY2019 the projected budget gap declined from $519.7 million to $97.8 million, which was the final budget under former Mayor Emanuel. The City’s FY2019 Annual Financial Analysis credits this decrease to actions taken to increase revenue and generate savings through reduced health care costs, lease consolidations, energy efficiencies and phasing out the use of non-recurring revenue sources. However, the City’s Corporate Fund deficit grew to $838.2 million in FY2020. The dramatic increase in the deficit in FY2020 was primarily due Mayor Lightfoot’s administration including expenses related to long-term liabilities such as pension and debt service in the preliminary budget forecast.[5] The preliminary projection assumes no substantive changes to City operations in 2021 and assumes restrictions tied to COVID-19 will be lifted sometime in the second half of 2021.[6] The forecast projects that the budget gap will grow to $1.5 billion within the next three years based on existing revenue and expenditure projections. 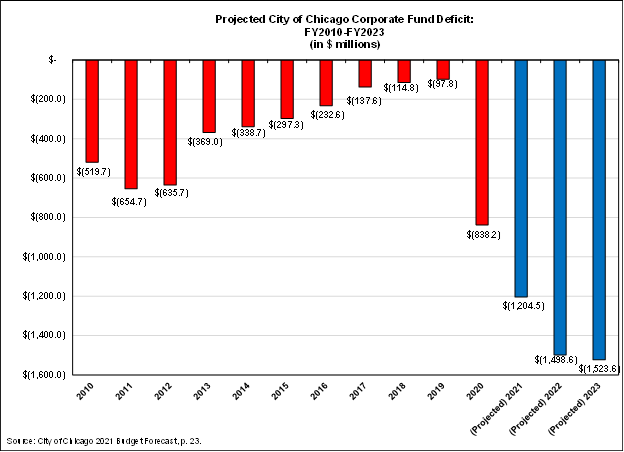 As previously noted, the City is required by state law to produce a balanced budget annually for the fiscal year that begins on January 1. The recently released forecast is the mid-year report leading up to the release of the Mayor’s proposed FY2021 budget in October 2020, which means the Mayor’s administration will have limited time to identify sources of revenue and budget cuts or efficiencies that could close the $1.2 billion budget gap throughout the course of the 2021 fiscal year. Mayor Lightfoot has said that everything is on the table including, increasing property taxes, the personal property lease tax on computers, using TIF surplus, resorting to layoffs and additional financial support from the federal government. However, her administration does not plan to seek a change in state legislation to allow for a graduated real estate transfer tax, which was originally part of the plan to close the current year’s preliminary budget gap, but was ultimately not approved by the Illinois General Assembly.

While the City is benefitting from the taxes imposed on the legalization of recreational marijuana and received a favorable change in the tax rates imposed on a Chicago casino, those revenue sources are unreliable particularly during the current pandemic and will not fully resolve the structural imbalance between revenues and expenditures. A number of other potential solutions to the City’s serious financial challenges will be politically difficult and require the Mayor and City Council to make very tough decisions on how to stabilize the City’s finances while continuing to provide basic municipal services.