A public hearing on the preliminary FY2015 budget will be held on July 16, 2014.  Board President Preckwinkle plans to present her final budget proposal for FY2015 in October 2014.

The preliminary FY2015 budget forecast for the County’s General and Health Funds shows revenues of $2.793 million and expenditures of $2.962 million, resulting in a deficit of $168.9 million. The General and Health Funds account for approximately 80 percent of the County’s total operating budget, which also includes special purpose funds and grants.

The following table compares the adopted FY2014 budget with the preliminary FY2015 budget. The projected FY2015 deficit reflects a $75.2 million increase in projected expenditures in the General Fund accompanied by a $43 million decrease in expected revenues. In the Health Fund, expenditures in FY2015 are projected to increase by $50 million more than revenues. 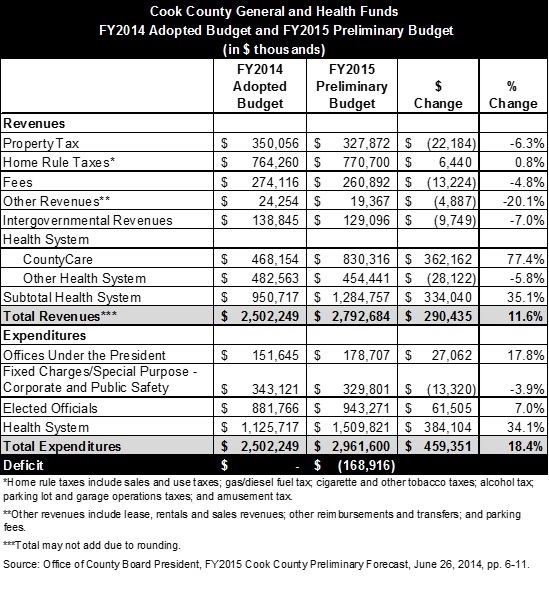 General Fund revenues are projected to decline in FY2015, led by a decrease of $22.2 million in property tax revenues available to the General Fund due to rising debt service payments. Fees are expected to decline by $13.2 million, reflecting decreases in court case filings and real estate transactions, and intergovernmental revenues are expected to drop because of the planned decrease in motor fuel tax funding. The County expects home rule taxes to increase slightly, based on modestly improved sales tax collections.

The preliminary FY2015 Health Fund budget largely reflects the activities of CountyCare, the County’s managed healthcare program. CountyCare was launched as a demonstration project in early 2013 to obtain early coverage for patients who would be eligible for Medicaid under the federal Affordable Care Act as of January 1, 2014. Many of the patients had previously been treated for free by the Cook County Health and Hospitals System, which receives a subsidy from the County to help pay for services for the uninsured, including inmates at the Cook County jail. The demonstration project was originally due to end on December 31, 2013, but the federal government extended it until July 1, 2014.

As of July 1, CountyCare will begin to expand to cover other Medicaid recipients in addition to the low-income adults who were newly eligible under the federal healthcare law. CountyCare members have access to a regional network of healthcare providers consisting of Health System hospitals and clinics as well as subcontracted community partners such as federally qualified health centers. The Health System receives a fixed monthly payment for each member from the federal government to cover CountyCare costs.

In FY2015 total Health System expenditures are projected to increase by $384.1 million from budgeted FY2014, while revenues are projected to increase by $334.0 million. The County said the revenue increase is largely due to expected FY2015 CountyCare membership of 89,500, far above the budgeted FY2014 number of 56,131. However, CountyCare expenditures are rising more rapidly than expected for members who receive services outside of the Health System.

The County also presented a mid-year estimate of results for the year ending on November 30, 2014.  The County currently predicts an FY2014 year-end shortfall of $85.9 million, largely due to CountyCare spending outpacing revenues.

The next table compares the adopted FY2014 budget with the current estimate of year-end FY2014 results. 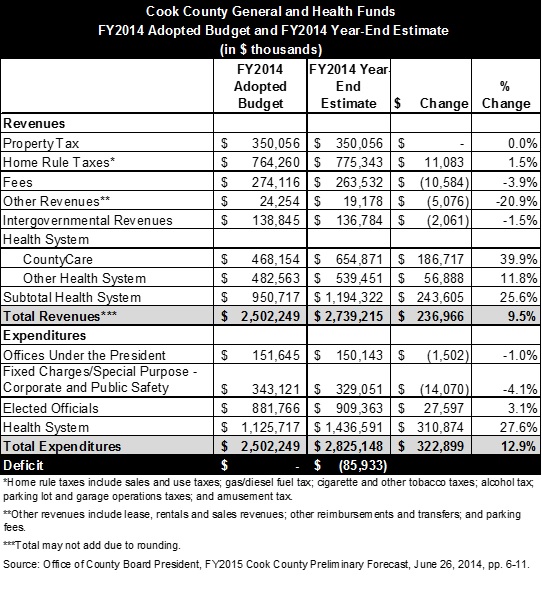 Health System revenues in FY2014 are forecast to be $243.6 million, or 25.6%, above the budgeted level because of higher than expected CountyCare membership. The FY2014 budget provided that if the System received additional revenues associated with higher than anticipated enrollment in CountyCare, the resources could be used to pay additional expenses associated with the increased membership.

CountyCare expenses are expected to exceed revenues for a number of reasons, including a requirement that the Health System repay the federal government $33.5 million for monthly payments in 2013 that exceeded actual costs. In addition, the monthly payment rate for newly eligible Medicaid recipients under the Affordable Care Act was expected to be reduced to $569 per member from $632 beginning on July 1.

The FY2014 budget included a Health System subsidy of $175.0 million. With operating revenues of $1.194 billion and expenditures of $1.437 billion, the actual shortfall is currently estimated at $242.3 million—or $67.3 million more than the budget target. The Board President’s Office said that several approaches to closing the gap are being considered, including requesting additional Medicaid reimbursement from the federal and State governments and attempting to channel more CountyCare patients into the Health System itself, especially for prescriptions.

In the General Fund, actual FY2014 expenditures are currently expected to be $12.0 million above budget mainly because of increases in public safety hiring and overtime expenses. General Fund revenues are projected at $6.6 million below budgeted levels, with an increase in home rule taxes more than offset by declines in fees and other revenues. Among home rule taxes, strong gas tax collections were attributed to enhanced compliance efforts, while sluggish sales tax activity was tied to the unusually cold winter.

To address the projected FY2014 General Fund budget shortfall of $19.6 million, County officials are considering contract changes and delays in filling vacancies, among other measures.