On August 12, 2020 the Chicago Transit Authority (CTA) approved Ordinance 020-070 amending its FY2020 budget to incorporate $690.1 million of the CARES Act funding it received from the federal government in response to the COVID-19 pandemic. The CARES Act funding will help offset the decline in system generated revenue and public funding.[1] This is the first time in nearly a decade that the CTA has had to amend its operating budget mid-year due to a drastic change in revenues.[2]

The CTA received $817.5 million in CARES Act funding from the federal government. Of the $817.5 million, the CTA intends to use approximately $690.1 million in FY2020 to help cover shortfalls in funding and carryover the remainder into FY2021 to help stabilize next year’s budget. The CTA’s 2020 fiscal year ends December 31, 2020. The CTA intends to release its FY2021 proposed budget in mid-October 2020.

The table below provides a summary of the changes in revenues and expenses between the original FY2020 budget and amended FY2020 budget.

Of the $690.1 million in CARES Act funding that the CTA appropriated in the FY2020 amended budget, $425.5 million will be used to supplement system generated revenue and $264.6 million will be used to supplement public funding. The Regional Transportation Authority (RTA), which is the financial oversight board of the CTA, Metra and Pace Suburban Bus service, requires the CTA to have a recovery ratio of at least 54.75%. The CTA’s amended budget projections will narrowly meet that threshold at 54.76%. The CTA’s amended budget will still need to be approved by the RTA Board.

The FY2020 budget was originally adopted by the CTA Board in November 2019 and was projected to generate $1.57 billion in operating revenues. The $1.57 billion included $695.7 million in system generated revenue and $874.8 million in public funding. System generated revenues include revenues generated from fares and passes, the reduced fare subsidy from the State, concessions, advertising, and statutorily required funding from the City of Chicago and Cook County. Public Funding includes sales tax receipts and real estate transfer taxes. However, the FY2020 amended budget projects a 58.0%, or $403.8 million, decline in system generated revenues and a 30.3%, or $264.6 million, decline in public funding, for a total decline in revenues of $668.4 million. Of the system generated revenues, farebox revenues will see the largest dollar decline between the original and amended 2020 budget, falling by $375.1 million or 64.0%. This is due to the dramatic decline in ridership that began in mid-March 2020 following Governor Pritzker’s stay-at-home order. Ridership continues to lag since a large number of workers continue to work from home rather than commuting downtown. Under public funding, Sales Tax I, which includes sales and use taxes imposed by the RTA and collected by the State throughout the Northeastern Illinois Transit Region, will see the largest dollar decline between the original and amended FY2020 budget, dropping by $129.3 million or 31.6%.

While all revenues are projected to decline between the adopted and amended budgets, total operating expenses are projected to increase by $21.7 million or 1.4%. The primary driver behind this increase is other debt service, which is projected to increase by 1,390.0% or $27.8 million. The original FY2020 budget assumed that the debt service for previously issued debt would be paid from the capital budget. However, with the FY2020 amended budget a portion of the debt service will remain on the operating budget, consistent with historical practice.[3] Appropriations for labor and contracts will also see slight increases. The increase in labor expenses is due to overtime and increased health care costs.[4] Although ridership has declined, the CTA has continued to provide normal service levels on buses and trains.[5] 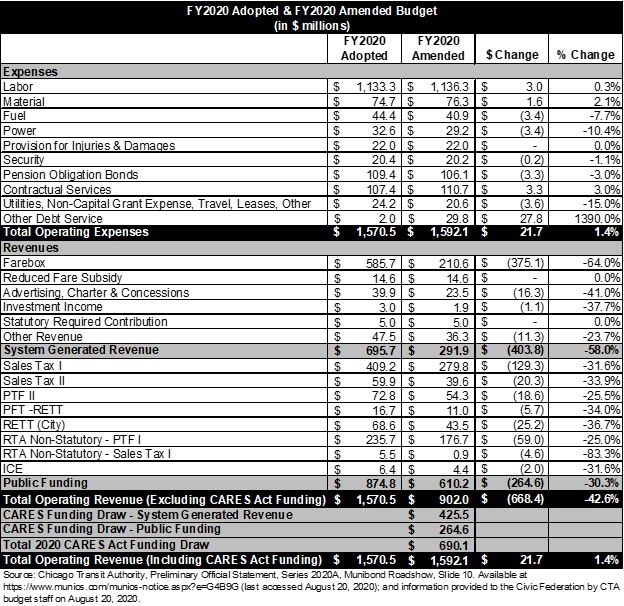 As previously noted, ridership has declined significantly since the stay-at-home order went into effect in mid-March 2020 and has not rebounded due to the large number of workers that continue to work from home rather than commuting to work downtown. The chart below compares actual bus and rail ridership between FY2011 and FY2019 with the original FY2020 budgeted ridership projections and revised ridership levels in the FY2020 amended budget. The CTA is projecting total bus and rail ridership to total 193.7 million in the amended FY2020 budget. This is a decline of 255 million rides, or a 56.8% reduction in ridership between the FY2020 original budget and FY2020 amended budget. Ridership peaked in FY2012 with 545.6 million riders. Between FY2012 and the amended FY2020 budget ridership will have declined by 351.9 million or 64.5%. The CTA worked with the MIT Transit Lab to develop these ridership estimates, which are in line with industry averages around the country. 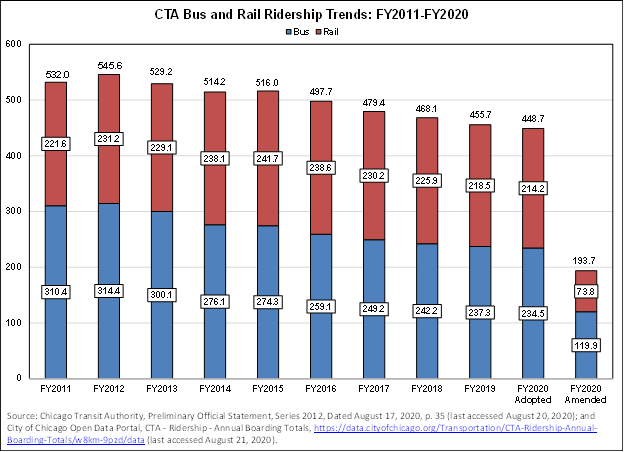 The CTA and other transit agencies have been advocating for additional funding from the federal government in an effort to avoid service cuts and fare increases.

The Civic Federation will continue to monitor the actions taken by the CTA and other transit agencies in the region as they navigate their budgets at a time when ridership is at historical lows and other revenues decline due to the slow down in the economy.