Federal Relief Funding to Chicago Public Schools, Now and Then

In March Congress passed the $2.2 trillion CARES Act, the third federal coronavirus relief act, which among many other things provided $13.2 billion in funding to K-12 schools across the country.[1] The funding can be spent on programs and coronavirus response including:

Allocations to each state are based on federal Title I funding, which prioritizes funding to states with more low income students.[2] While a much-needed supplement for school districts that are facing both higher costs and needs at the same time state and local revenues are declining, the federal funds provided thus far fall short of the K-12 school funding provided during the Great Recession. That primary and secondary education funding was part of the 2009 stimulus bill, the American Recovery and Reinvestment Act (ARRA), and has been pegged at $56.5 billion, adjusted for inflation. This blog will look at federal funding trends to Chicago Public Schools, including ARRA funding and CARES Act funding.

The overall goal of ARRA was to provide temporary funding to stimulate the economy and help the recovery from the Great Recession. The short term goals of the ARRA school funding were to save school jobs, mitigate an education funding cliff generated by cratering state and local revenues and invest in school improvements. In contrast, the economic dislocations caused by the pandemic are ongoing and of uncertain length and depth while the virus remains uncontrolled in much of the country.

Since the funding from ARRA expired in 2012, federal funding to Chicago Public Schools has generally declined on an annual basis, both as a total amount and as a percentage of the budget. Federal funding as a percentage of the operating budget hit a high of 24.4% in FY2009 and declined to 11.6% by the FY2020 budget, as amended in November 2019. Funding will increase somewhat from budget in FY2020 and FY2021 as Chicago Public Schools is due to receive $205 million or 40% of the $569.5 million provided to Illinois schools under the CARES Act.[3] These funds must be spent by September 2022. CPS has not yet released its FY2021 budget for the fiscal year that began July 1, 2020, but will need to approve a final budget by the end of August, according to State law. Much is uncertain for the coming fiscal year as CPS and schools around the country and world debate how and if to have in-person or online classes or both during the ongoing pandemic.

Federal funding was expected to make up 11.6% or $732.7 million of the $6.3 billion CPS FY2020 operating budget, as amended in November 2019. However, the budget was amended again in March 2020 to allow the district to spend up to $75 million in additional funds for coronavirus response. The March amendment took place before the CARES Act was signed into law.

The following chart shows both annual federal operating funding amounts (bars) and percentage of the CPS operating budget (line) from FY2008 through budgeted FY2020. In FY2009-FY2012, federal funding was higher due to ARRA funds. However, it is important to note that federal ARRA funding took the place of some state funding in FY2010. The bars show what portion of the federal funding was from ARRA in red. After the expiration of ARRA funds, federal operating funding has generally declined from a high of $1.2 billion in FY2010 to a projected $732.7 million in FY2020, before any CARES Act funds are taken into account. 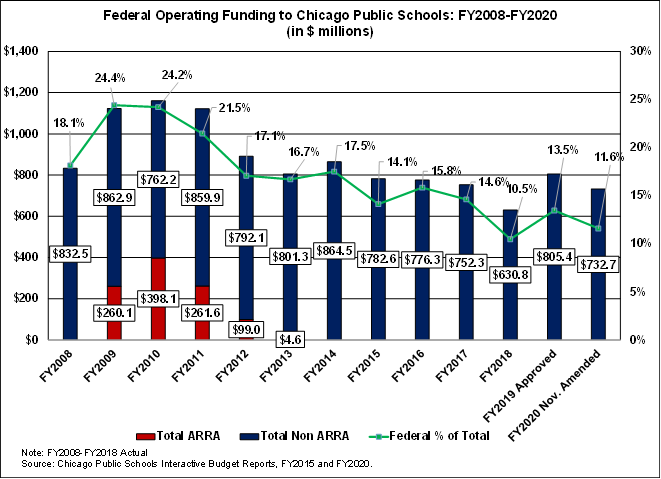 Congress reconvened this week to consider additional coronavirus relief measures. The U.S. House of Representatives passed in May the $3 trillion Health and Economic Recovery Omnibus Emergency Solutions (HEROES) Act that would have sent more funding to state and local governments, but the bill stalled in the Senate. Negotiations between the House, Senate and White House are ongoing about provisions from extending unemployment benefits to additional stimulus checks to how much funding to replace lost revenue—if any—to provide to states and local governments.

[1] An additional $3 billion in emergency relief was provided to governors to distribute to schools, colleges and universities particularly affected by the pandemic and economic downturn.

[2] Chicago Public Schools is party to a multi-state federal lawsuit against the U.S. Department of Education’s rule that would divert some CARES Act education funding to private schools. The District has estimated it will lose $10 million if the diversion is enforced. https://cps.edu/News/Press_releases/Pages/PR1_07_20_2020.aspx The Department of Education’s rule can be found here.

[3] An additional $108.5 million was allocated to the State of Illinois under the Governor’s Emergency Education Relief Fund also included in the CARES Act. The Governor’s Office announced how the funds will be divided among priorities on July 14, 2020. How much will be directed to CPS has not yet been announced.