The most basic question about a pension fund is whether its assets are sufficient to cover total liabilities incurred. In this blog post, we examine the aggregate pension liabilities and Other Post Employment Benefit (OPEB) liabilities of ten large local government pension funds in the Chicago area and their collective assets.[1]

Liabilities are calculated using actuarial assumptions about the value of all future pension payments for both current and retired employees, as well as any other beneficiaries. Under GASB Statement No. 25, assets of public pension plans are reported based on the actuarial value of assets, which is determined using a smoothed market value or the current market value. A smoothed market value is the result of smoothing the effects of short-term market volatility by recognizing deviations from expected returns over a period of three to five years.[2]  The use of current market value to determine the assets of the plan reflects the value of the pension fund’s assets at the end of the fiscal year. This measure is subject to fluctuations in the investment market. 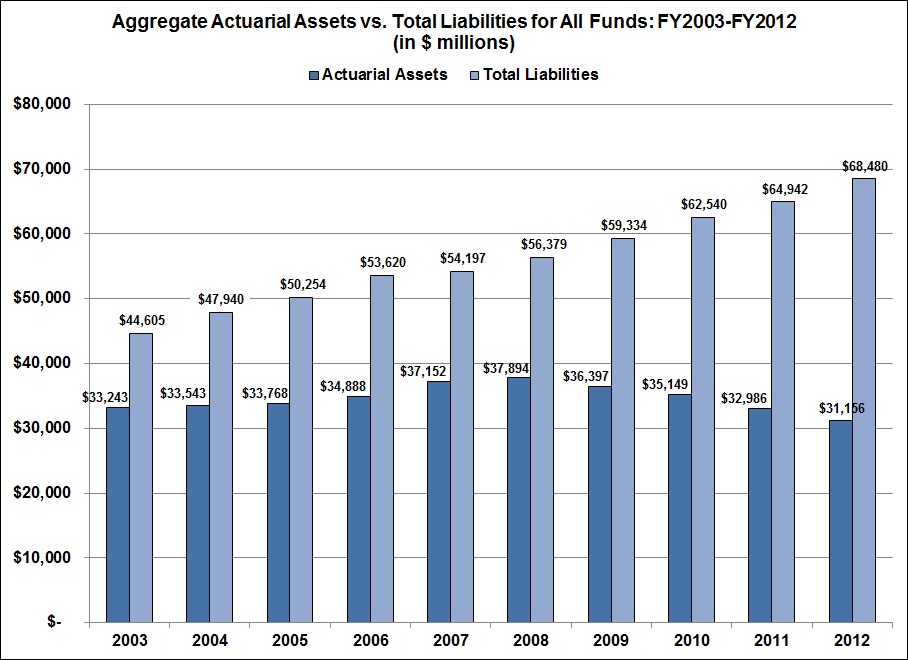 The following figure shows the five-year percentage growth or decline in assets and liabilities for each fund studied. Of the ten pension funds, the Cook County Fund experienced the fastest growth in liabilities over the past five years, with a growth rate of 32.1%. Between FY2008 and FY2012, liabilities grew for all funds and all funds experienced a loss in actuarial assets. This is a strong indication that current funding policies and benefit levels are unsustainable. It is also important to note that for several of the funds below, various changes to actuarial assumptions, including reductions to expected rates of return for the Municipal, Laborers’ and Police Funds that were made in FY2012, contributed to the increases in actuarial liabilities for the funds over five years, in addition to insufficient employer contributions and shortfalls in investment returns. 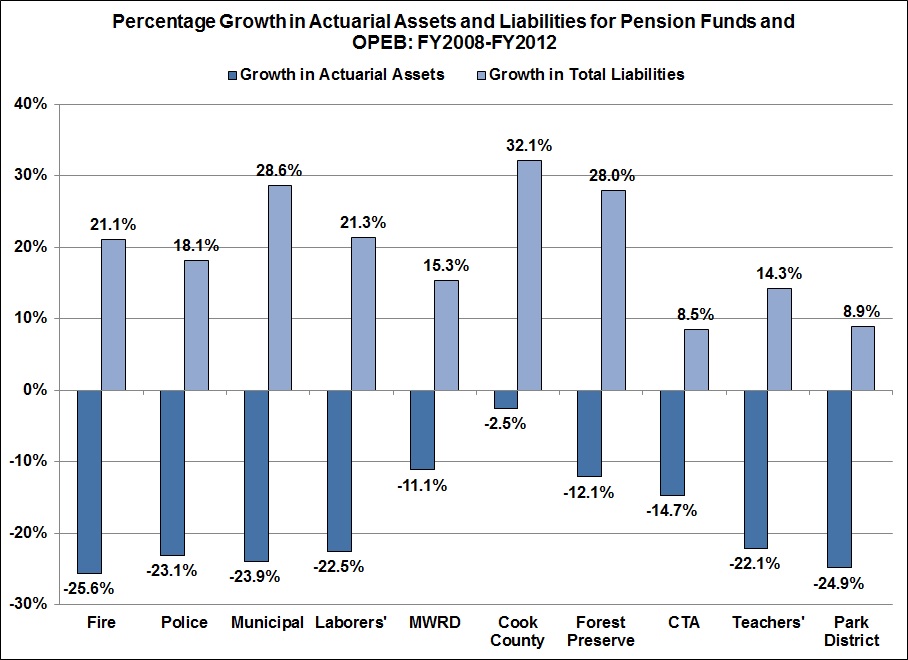 Pension benefit and/or funding reforms have been proposed or passed in the Illinois General Assembly over the past several years that have been intended to increase assets and reduce liabilities for several of these funds. See the forthcoming Status of Local Pensions report or previous posts on this blog for additional information about those reforms.

[1] Funds included in the analysis are: the City of Chicago’s four pension funds (Municipal, Laborers’, Police and Fire), Chicago Park District Fund, Chicago Teachers’ Pension Fund, Cook County Fund, Forest Preserve District of Cook County Fund, Metropolitan Water Reclamation District (MWRD) Fund and the Chicago Transit Authority (CTA) Fund. Of the ten funds, three do not report OPEB liabilities: the MWRD and the Park District, whose OPEB costs are paid exclusively out of the employers’ operating budgets as opposed to the pension funds, and the CTA, whose retirees’ healthcare is funded by an independent trust.