The Civic Federation has long encouraged government transparency and accountability, both of which are emphasized in our Mission Statement. To promote financial transparency many local governments provide a Comprehensive Annual Financial Report (CAFR) for each fiscal year.[1] Not to be confused with a government’s budget, which is principally a roadmap for the upcoming fiscal year and largely relies on cash basis accounting and forecasting, the CAFR details the government’s audited actual, year-end fiscal activities and includes revenue collection, expenditures, debt service and fund balance reserves. However, as recently highlighted in a blog on the Governing magazine website, CAFRs can be very dense and complicated. The authors point out that very few governments produce a simplified financial statement despite its obvious benefit to citizens. But, they recognize that New York City, which has an annual budget of $78.5 billion,[2] recently released its first popular annual financial report (PAFR) for its 2015 fiscal year ended June 30, 2015. The inspiration for this post was to examine which local and state governments in Illinois and around the U.S. produce a PAFR.

What is a Popular Annual Financial Report?

Many governments in the U.S. are required to produce audited financial statements. Many also produce the more detailed CAFR document. These documents can be complex and difficult for a layperson to understand. Therefore, good government groups like the Government Finance Officers Association (GFOA) encourage governments to also produce a simplified summary called the PAFR that the average citizen can read and understand. A PAFR is not a required document but is considered by the GFOA to be a best practice. According to the GFOA, to increase transparency and accountability, the PAFR should contain clear language, not the jargon and technical language often found in budget books and CAFRs. The PAFR should also be inviting to the reader, which can be accomplished by creating an open layout and easy-to-understand charts and graphs. The PAFR should report the actual fiscal condition of the municipality, government entity or state.

The Chicago Park District publishes both a CAFR and PAFR; the CAFR is 129 pages long, but the PAFR is only 21 pages long. The District points out that to receive the GFOA Award for Outstanding Achievement in Popular Annual Financial Reporting “a government must publish a PAFR, the contents of which conform to program standards of creativity, presentation, understandability, and reader appeal.” According to its popular reporting awards program, half of the total points for a GFOA award are based on understandability that increases transparency and user-friendliness. Other criteria include: 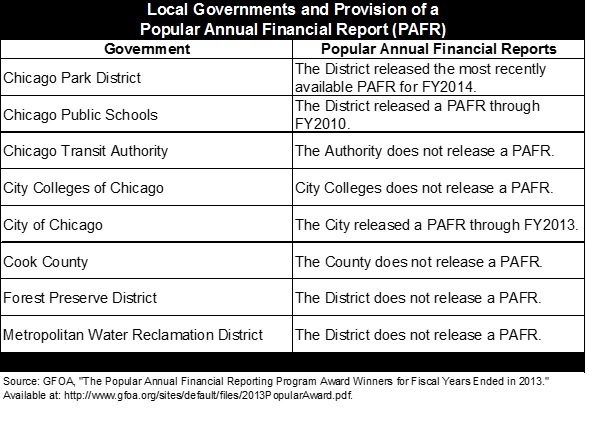 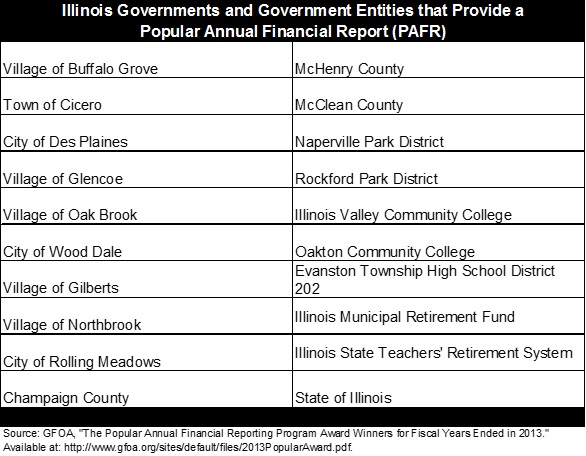 Finally, New York City, the largest city in the U.S. both by population and by its operating budget of $78.5 billion, recently provided its first PAFR to the public and summarized the 422 page CAFR in 24 pages. Both Los Angeles and Phoenix provided PAFR-equivalents for their most recently available audited financial information. 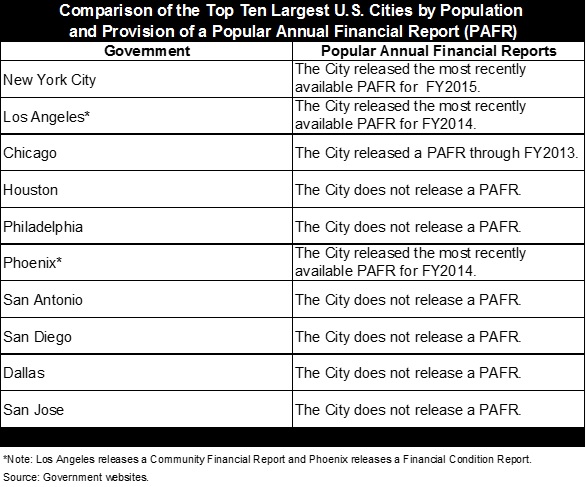 [1] Note: Local government financial reporting varies by state. Illinois requires all local governments in the State to submit an Annual Financial Report (AFR) that summarizes revenues, expenditures, fund balance and debt, but does not require them to submit a CAFR which often provides more in-depth financial information.

[2] New York’s annual operating budget is 25 times larger than the City of Chicago’s annual Corporate Fund budget of about $3.6 billion.