The fiscal year 2022 budget for the State of Illinois and the process that created it showed the ongoing impact of the COVID-19 pandemic, but also the beginnings of a recovery within the State economy. Unlike the FY2021 budget, the spending plan for FY2022 does not rely on federal borrowing and instead includes provisions to pay off the previous year’s remaining Municipal Liquidity Facility (MLF) borrowing early. It was also buoyed by better-than-expected revenue projections and significant federal funding from the American Rescue Plan Act (ARPA) approved in March 2021. This marked a significant turnaround from the prior year budget, which had a $6 billion shortfall.

Lawmakers met both in-person and remotely during the spring session, but the budget language was not released until the final days of session at the end of May. The rushed process meant that significant drafting errors were only discovered within Senate Bill 2800, the budget bill, after it passed both houses on June 1. The errors would have prevented certain appropriations within the bill from going into effect until June 1, 2022—eleven months into the fiscal year. Because of the status of the bill, the errors had to be corrected through an amendatory veto from Governor JB Pritzker. The budget was finally approved as Public Act 102-0017 on June 17 when both houses of the General Assembly accepted the governor’s amendatory veto. The budget implementation bill, known as the BIMP, was signed by the governor on June 17.

The table below shows both the revised estimates for the FY2021 budget, as well as FY2022 revenues and expenditures. Revenue estimates for FY2021 were revised upwards several times throughout the fiscal year, reflecting updated data on sales and income taxes, which showed better results than originally anticipated at the worst point in the pandemic in spring 2020, when the FY2021 budget was being developed. Some of these upward revisions for FY2021, which ended June 30, 2021, also prompted increases to projections for FY2022, as discussed below. As a result, local government revenue sharing was restored and the full $350 million annual increase to P-12 school funding through the Evidence-Based Funding Formula was funded for FY2022.

During calendar year 2020, the State of Illinois issued a total of $3.2 billion in short-term debt through the Federal Reserve Bank’s Municipal Liquidity Facility (MLF). Of that, $1.2 billion issued in June 2020 was failure-of-revenue borrowing that had to be repaid within a year. The State paid off the borrowing as planned in June 2021. The FY2022 State budget includes provisions to repay the remaining $2.0 billion of MLF debt that was issued in December 2020 within the fiscal year, though it is not due until December 2023. As of the latest Federal Reserve report on MLF on July 13, 2021, the State had repaid $587.3 million of the $2.0 billion.

According to documents released by the Governor’s Office of Management and Budget, the State plans to spend $2.8 billion of the $8.1 billion it will receive in ARPA Coronavirus State Fiscal Recovery Fund dollars in the FY2022 budget. Of that amount, $1.8 billion is for the operating budget and $1.0 billion is for capital. The State has several years to spend the federal funds, which unlike 2020’s CARES Act funds, can be used for revenue replacement but have other restrictions, such as a prohibition against using the funds for pension contributions or debt service.

Because the budget legislation comprises thousands of pages and was not filed until the end of session, the following analysis of the operating budget should be regarded as preliminary. 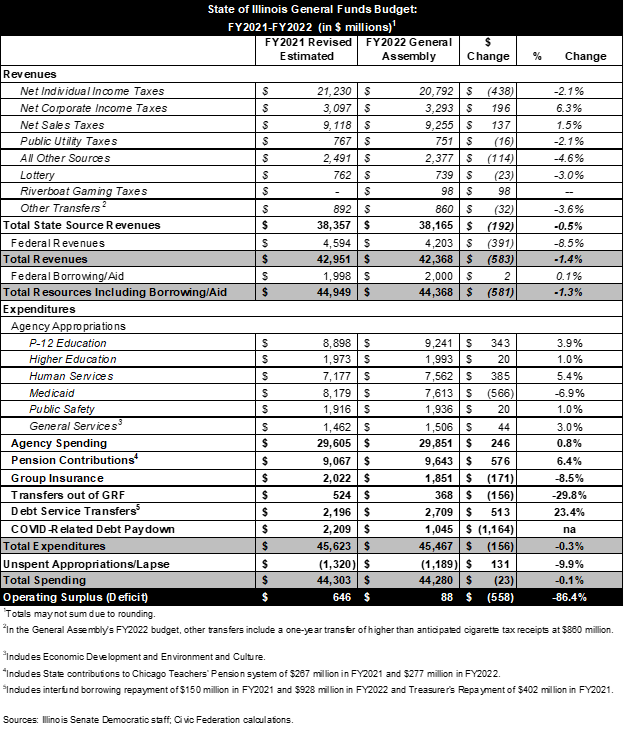 The enacted FY2022 budget projects $42.4 billion in General Funds revenues, $44.4 billion including additional federal aid. The General Funds support the regular operating and administrative expenses of most State agencies and are the funds over which the State has the most control. The operating budget also includes Other State Funds, which are accounts for activities funded by specific revenue sources that may only be used for specific purposes, and Federal Funds (other than those designated for General Funds), which support a variety of State programs with federal revenues. The remaining revenues that are not included in the General Funds are restricted for specific purposes, shared through revolving funds between government agencies, held in trusts or generally not available for discretionary spending by the General Assembly.

The table above shows the change in General Funds revenues between FY2021 revised estimates and the enacted FY2022 budget. Overall, revenues will decrease by approximately $583 billion, or 1.4% in FY2022. This is a drop from $42.9 billion to $42.4 billion. Comparisons between FY2021 and FY2022 are difficult because of the change in the income tax due date that moved revenue from FY2020 to FY2021 and is responsible in part for the decline in revenue in FY2022 compared to FY2021.

The revenue forecast for FY2022 was adjusted upward due to stronger than expected performance at the end of FY2021. After accounting for anticipated debt service payment requirements, the FY2022 revenue forecast was increased by nearly $1.5 billion.

The budget did not include an originally proposed 10%, $182.0 million, cut in the share of the state income tax provided to municipalities and transit districts.[2]

There is projected to be a slight decrease of 0.5%, or $192 million, in total state source revenues. Federal revenues are projected to decrease by 8.5%, or $391 million, falling from $4.6 billion to $4.2 billion; these projections incorporate funding from the federal American Rescue Plan (ARP) approved in March 2021. Illinois will receive a total of $8.127 billion in ARP funds. In the FY2022 budget the State will utilize $2.8 billion; of that amount $1.8 billion will be used for operations and $1.0 billion for capital spending.[3]

The remaining $266.0 million in proposed business tax changes were rejected by the General Assembly. Descriptions of the tax changes can be found here.

The General Assembly’s FY2022 budget has $44.3 billion in total expenditures. The base spending for this fiscal year is $23 million or 0.1% less than the estimated FY2021 budget.

The FY2022 budget fully funds the pension contribution at $9.6 billion, which is significantly higher than the estimated FY21 amount of $9.1 billion. These numbers include the contributions to the Chicago Public Schools teacher pensions for FY2021 and FY2022. There is also an increase in General Funds for Evidence-Based Funding in Education, made possible by higher than expected revenues for FY2022.[5] Group insurance payments are down $171 million to $1.85 billion—the same level as in the Governor’s proposed budget. Debt service transfers are $513 million higher than in FY2021, due mainly to a higher interfund borrowing repayment in FY2022 than FY2021. As noted above, the State budgets payments in FY2021 and FY2022 that will fully repay the $3.2 billion in MLF borrowing the State issued in June and December 2020.

Agency Spending—not including pension contributions, group insurance, debt service, statutory transfers and COVID-related debt payments—totals $29.9 billion in the General Assembly’s budget. This represents an increase of $246 million or 0.8% from $29.6 billion in FY2021. Highlights include: