The pension holiday, proposed in the Governor’s budget for the fiscal year that starts on July 1, 2019, was intended to save about $878 million through a seven-year extension of the statutory deadline for achieving 90% funding. The pension savings were a key part of Governor Pritzker’s plan to close a projected $3.2 billion operating deficit in FY2020.

But the Pritzker administration decided that the pension savings were no longer needed to balance the FY2020 budget due to a more optimistic revenue forecast. The revenue projection was boosted after the State collected more than $4.1 billion in income tax revenues in April—an increase of $1.5 billion, or 58%, from internal projections for the month.

Critics of the proposed pension holiday had expressed concern that it continued Illinois’ practice of deferring hard decisions and pushing costs into the future. Trustees of the Teachers’ Retirement System, the largest of the State’s five pension funds, opposed the proposal on the grounds that it could increase the system’s risk of insolvency in the event of an economic downturn.

Due to a long history of inadequate State contributions, Illinois pension funds are among the worst funded of any state. At the end of FY2018, the retirement systems had unfunded liabilities of $133.7 billion on a smoothed-asset basis and a combined funded ratio of 40.1%. The State’s 50-year funding plan, which began in FY1996, requires the systems to reach 90% funding by FY2045. Under the Governor’s proposal, the systems would have been only 65% funded in FY2045 instead of 90%.

Based on the strong April 2019 receipts, the Illinois Department of Revenue increased its projection of total income tax collections in FY2020 by roughly $800 million, from $21.2 billion to nearly $22 billion. The letter did not provide a breakdown of individual and corporate income tax projections in FY2020.

The following table shows how the new revenue forecasts will affect the FY2019 and FY2020 General Funds budgets. The table shows the numbers included in the Governor’s budget proposal on February 20, 2019, as well as revised numbers based on the administration’s May 7 letter. 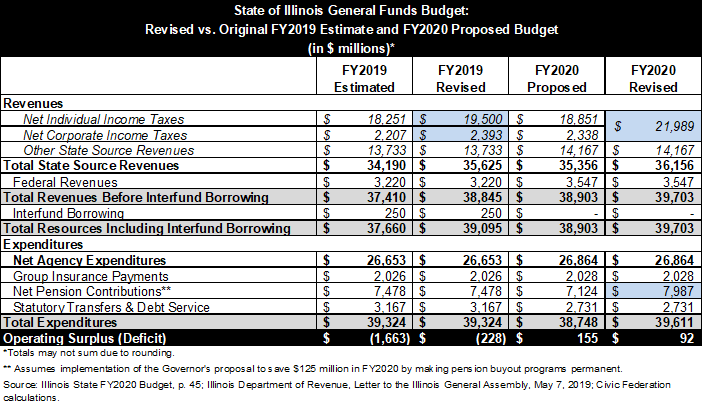 The estimated increase in income tax revenues in FY2019 eliminates most of the previously expected operating deficit in that year. The estimated FY2019 budget gap is reduced to $228 million from $1.66 billion.

In FY2020 required General Funds pension contributions under existing State law total $8.1 billion, excluding debt service on previously issued pension bonds. The Governor’s budget recommended a decrease of $1.0 billion to $7.1 billion. Of the $1 billion reduction, $878 million was due to the extension of the funding deadline and $125 million related to making permanent two voluntary pension buyout plans that were set to expire in FY2021.

Based on the May 7 letter, the table assumes that the initial FY2020 income tax revenue estimate is increased by $800 million and that pension contributions are increased by $878 million from the budget proposal. It is also assumed that the buyout proposal will be implemented. The result is a reduction in the modest projected operating surplus to $92 million from $155 million in the recommended budget.

The precise reasons for the April 2019 surge in revenue have not yet been determined, and it remains to be seen whether the strong growth will continue into FY2020. The legislature’s Commission on Government Forecasting and Accountability (COGFA) warned in its April Monthly Briefing that “this significant one month over performance cannot safely be extrapolated into future underlying growth.” COGFA was specifically concerned that much of the April growth might have involved investment income, which is highly volatile. The commission said other states with similarly strong April revenue are generally “urging caution of future expectations.”

However, administration officials said the revised FY2020 forecast was conservative because it assumed that only a portion of the April 2019 growth would be sustained. In the letter, they said the new FY2020 revenue projection factors in continued strong employment growth but does not include likely one-time sources such as the stock market’s performance and taxpayers’ adjustments in their withholdings because of the new federal tax law.

The proposals to extend the pension funding schedule and make the pension buyouts permanent were part of a five-point pension plan announced by the Pritzker administration in early February. The plan includes issuing $2 billion in pension obligation bonds to improve the systems’ funding levels; dedicating $200 million per year from a future graduated income tax to supplement statutorily required State contributions; and transferring State assets to the pension funds. The Governor has created two pension-related task forces: one to identify potential assets to shift to the funds’ books and another to consider the consolidation of local and State funds.

In the letter, officials said the two task forces are expected to issue recommendations in the coming months that could be used to develop a long-term pension reform plan. It is not yet clear how or if the decision not to proceed with the pension funding delay might affect the other items in the five-year plan, such as the proposed $2 billion bond sale.

In light of the reduced FY2019 deficit, it is also not certain whether the administration will proceed with a proposal in the FY2020 budget to sell $1.5 billion of bonds in June 2019 to trim the State’s sizable backlog of unpaid bills and avoid steep late-payment interest penalties. According to the Comptroller’s Office, the bill backlog currently stands at $6.4 billion.