In his first budget proposal for the State of Illinois, Governor Bruce Rauner recommended more than $4 billion in spending cuts and $2.2 billion in estimated pension savings to close a projected budget gap of over $6 billion in fiscal year 2016.

The budget’s largest single projected savings come from a new proposal to reduce the State’s massive pension obligations. Employees hired before 2011—known as Tier 1 employees—would be shifted into the same lower benefit plan that has covered employees hired after that date. Retirees’ pension benefits and benefits already earned by Tier 1 employees would not be affected. Public safety workers are not covered by the new proposal.

According to the budget, the new proposal is expected to lower statutorily required General Funds pension contributions in FY2016 from approximately $6.6 billion to $4.4 billion and reduce the State’s unfunded liability of $111.2 billion (based on asset smoothing) by $25 billion.  Actuarial evaluations supporting these calculations have not been made available.

The new pension proposal must be approved by the General Assembly and is likely to face legal challenges. Major pension changes enacted by the State in December 2013 have been blocked by lawsuits; the Illinois Supreme Court is scheduled to hear oral arguments on the law’s constitutionality on March 11. The Civic Federation has estimated that if the law is upheld, FY2016 contributions would be roughly $5.5 billion.

The General Assembly did not accept Governor Quinn’s recommendation, and the budget that was enacted for FY2015 relied on short-term measures to cover operating expenses. As discussed here, these measures included $650 million of borrowing from funds outside the General Funds (known as interfund borrowing) and using $600 million of revenue from FY2014 to pay for Medicaid expenses in FY2015. The budget also left hundreds of millions of dollars in known costs unfunded.

For FY2016 Governor Rauner did not present an alternative budget with additional revenues. The new administration began with a maintenance or “autopilot” budget for FY2016, reflecting amounts needed to fund each agency’s core mission and programs. This spending totaled $38.2 billion, compared with revenues of $32.0 billion, resulting in a budget gap of $6.2 billion.

The proposed FY2016 budget has total expenditures of $31.5 billion—a reduction of $6.7 billion—in order to leave an operating surplus of $504 million to pay off accumulated bills. The backlog of unpaid bills at the end of FY2016 is estimated at $5.2 billion.

The table below shows preliminary General Funds budget results for FY2014, the revised FY2015 budget and the FY2016 autopilot and recommended budgets. In the table, pension contribution savings in FY2016 are shown as $2.4 billion rather than $2.2 billion because the FY2016 autopilot pension contributions do not account for transfers from the State Pensions Fund, which is funded from unclaimed property. 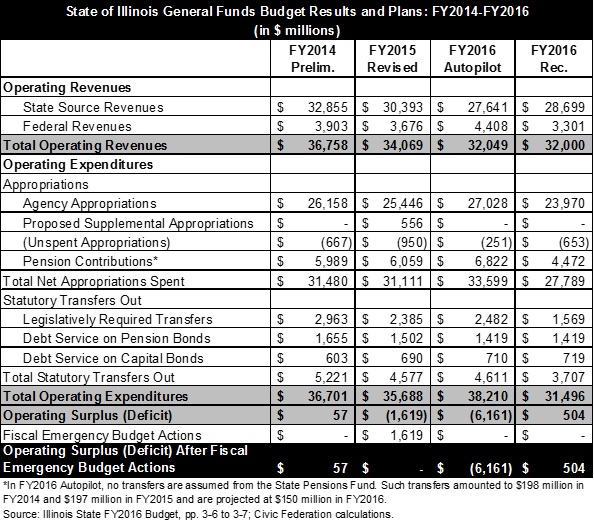 Federal revenues, which consist mainly of reimbursement for State Medicaid spending, decline by $1.1 billion from the FY2016 autopilot budget to the recommended budget due to the proposed drop in Medicaid expenditures. Illinois Medicaid spending is generally reimbursed at 50.76% by the federal government, which means that a $1 decrease in Medicaid appropriations is accompanied by a decrease of more than 50 cents in federal revenues. The proposed $1.5 billion reduction in General Funds appropriations to the Department of Healthcare and Family Services, the State’s main Medicaid agency, leads to a decrease of about $761 million in federal revenues and contributes $739 million (not $1.5 billion) toward closing the deficit.

The proposed FY2016 budget would apparently roll back major Medicaid legislation approved during the spring 2014 legislative session that was estimated to cost $221.5 million, mainly for rate increases and other payments to hospitals and nursing homes. The total proposed payment cut to hospitals reportedly is $735 million.

The recommended FY2016 budget would also rescind Medicaid benefits such as adult dental services that were restored by the 2014 law after being eliminated as part of a plan designed to close a $2.7 billion gap in Medicaid funding in FY2013. Some of the proposed benefit changes—such as an increase in the level of need required for aged and disabled persons to be eligible for Medicaid-funded care—would be subject to approval from the federal government.

General Funds appropriations for employee and retiree group health insurance decline by approximately $700 million, or more than one-third, from $1.9 billion to $1.2 billion. The administration plans to achieve these savings in negotiations with its largest union, the American Federation of State, County and Municipal Employees, on a new contract to replace the agreement that expires at the end of FY2015.

State support for early childhood education would increase by $25 million, according to the budget. Staffing at the Department of Corrections would increase by 473 positions to improve safety and reduce overtime costs.

It remains unclear how the new administration will manage the FY2015 budget, which has an estimated shortfall of $1.6 billion. The FY2016 budget proposes supplemental General Funds appropriations in FY2015 of $556.4 million. Of that total, $399.4 million is directed to the Department of Human Services, mainly to cover a shortfall in its Child Care Assistance Program, which provides State-subsidized child care for low income families. Another $117.1 million would go to the Department of Corrections, which could reportedly run out of money to pay guards at some prisons before the end of the fiscal year.

The FY2016 budget shows “fiscal emergency budget actions” of $1.6 billion to close the FY2015 operating deficit but does not provide details. The Governor has requested that the General Assembly give him emergency powers to reallocate spending to areas of high priority, reduce Medicaid reimbursement rates for healthcare providers and transfer money from Special Funds to General Funds without repayment.