As Illinois endured its 20th month without a complete budget, Governor Bruce Rauner proposed a financial plan for the upcoming fiscal year with a significant operating deficit and no details on how to address the State’s multi-billion backlog of unpaid bills.

The recommended budget for fiscal year 2018 has general operating revenues of $32.7 billion and expenditures of $37.3 billion, resulting in a budget gap of $4.6 billion. The proposal also shows up to $15.2 billion of unpaid bills at the end of the fiscal year on June 30, 2018.

Instead of providing a specific plan to end the crisis, the FY2018 proposal relies on the success of a bipartisan effort by leaders of the Illinois Senate. The components of the legislative package, known as the grand bargain, are still fluid, but they generally include spending cuts, tax increases and policy changes, as well as the sale of bonds to pay down the bill backlog.

In his budget address on February 15, Governor Rauner said he could support the Senate plan under certain conditions: no State tax on retirement income; no permanent increase in income tax rates without a permanent freeze on property taxes; no increased sales tax rates for food and drugs (but he was open to taxing services); and a firm limit on spending. The Governor continued to press for term limits for lawmakers and reforms to the workers’ compensation system but said no single demand was essential.

However, it remains to be seen whether the legislation will be approved by the Senate or even considered by the Illinois House. If no bargain is enacted, Governor Rauner said he would seek broad authority to make cuts on his own to balance the budget.

This approach is similar to the Governor’s FY2017 budget recommendation, which had an operating deficit of $3.5 billion. That proposal offered legislators a choice of closing the gap with additional revenues, if they agreed to pro-business policy changes, or granting Governor Rauner the power to slash spending. The General Assembly declined to authorize either option.

As discussed in this report, Illinois has not had a comprehensive budget since FY2015 because of a political dispute between Democratic legislators who control the General Assembly and the Republican Governor who took office in January 2015. State government has continued to function largely because of court orders, consent decrees and statutory requirements.

A stopgap appropriations package—signed on June 30, 2016 and expiring on December 31, 2016—provided partial relief for most areas of government that had received little or no State funding since the end of FY2015: higher education, human services and agency operations. But it did not cover employee group health insurance, which has not obtained general operating funds since the deadlock began.

Governor Rauner’s FY2018 budget includes additional appropriations for these areas in FY2017, which ends on June 30, 2017. At a Senate hearing on February 16, administration officials said no supplemental spending will be approved for FY2017 without a comprehensive budget plan in place for FY2018. 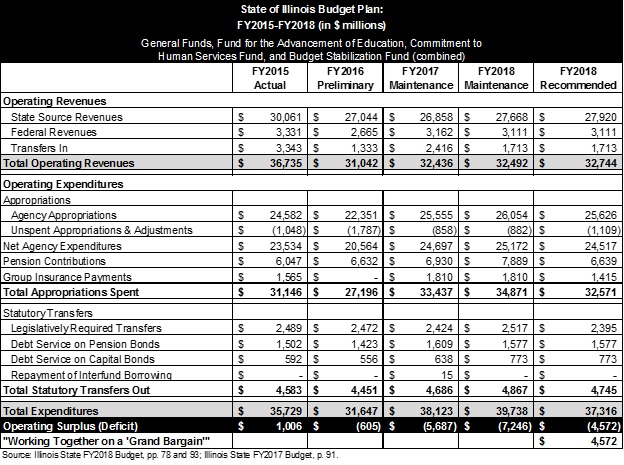 The FY2018 budget also includes the following spending increases from the maintenance level:

Projected FY2018 revenues of $32.7 billion include $300 million from the proposed sale of the James R. Thompson Center in Chicago. The net impact of the sale is estimated at $240 million, after accounting for expenses to relocate the 2,200 State employees who work in the building.

Even if the Governor and the General Assembly are successful at balancing the FY2018 budget through a grand bargain, the State still must address the deficits of past years, which through deferred payments have accumulated into a large bill backlog. The history and projections of the backlog are shown in the chart below. 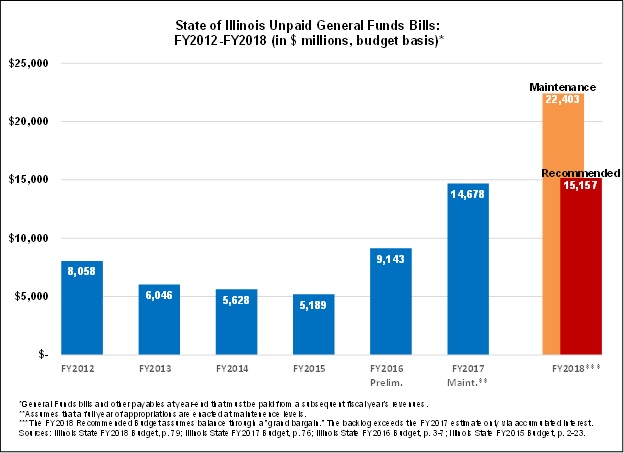 The backlog estimates presented above are on a budgetary basis and are intended to show accounts payable and other liabilities at the end of a fiscal year that will have to be paid from a subsequent year’s revenues. This is somewhat different from the backlog reported by the Comptroller, which represents outstanding bills at a point in time. The budgetary basis numbers include fiscal year-end General Funds payables—bills owed to vendors and payments and transfers owed to State agencies and local governments—that will be paid during the lapse period, as well as estimated Section 25 liabilities, which can be paid from subsequent years’ appropriations.

The ultimate amount of the backlog depends on both the outcome of FY2017 and a plan to address the backlog itself, neither of which is addressed in the FY2018 budget book. As shown in the chart above, the Governor’s Office of Management and Budget estimates that if FY2017 expenditures occur at maintenance levels, the year will end with a $5.7 billion deficit, which would be added to the backlog.

Since the second half of FY2017 expenditures have yet to be appropriated, it is within the State’s power to make meaningful cuts. Moreover, some new revenue measures to address the FY2018 deficit, if implemented immediately, would provide additional revenues in FY2017 as well.

However, even in the unlikely scenario that FY2017 ends with no deficit, the backlog left over from FY2016 would continue to grow due to interest costs. A significant portion of the backlog earns interest at either 9% or just over 12% annually. The Governor’s recommended budget proposal as written assumes a balanced budget in FY2018, but shows that the backlog would increase by an estimated $479 million, from the end of FY2017 to the end of FY2018, based on interest costs alone.

Therefore, even if the State balances its budget through a grand bargain in FY2018, it still faces a choice. It could do nothing about the backlog left over at the end of FY2017 (at whatever level it ultimately reaches), in which case the total backlog amount will continue to rise due to interest.

In the Senate’s proposal to pay off the backlog through a bond issuance of $7 billion, debt service payments are estimated at $1.1 billion for the next seven years. Adding direct backlog payments or debt service to the $4.6 billion needed to close the FY2018 deficit will make the choices needed to achieve a grand bargain significantly more painful.