As the State of Illinois’ budget impasse continues to drag on, it is commonly overlooked that the underlying economy and tax base in the State continue to grow.

In FY2017 the State of Illinois is projected to have an additional $631 million in General Funds revenues available compared to FY2016, the current fiscal year. The Governor’s FY2017 recommended budget shows a maintenance level of revenues totaling $32.3 billion, which represents resources available based on current law, compared to $31.7 billion in FY2016.

The increased revenues in the FY2017 maintenance budget represent a 2.0% increase in ongoing resources from FY2016 and are based primarily on underlying economic growth that continues to expand the income tax base and sales tax base in Illinois.

Income taxes are the largest State tax revenue source, accounting for 53.3% of the $28.0 billion in ongoing State-source revenues.  Changes in noneconomic factors obscure some of the growth in the income tax base in recent years.

The change in income tax rates halfway through FY2015 created a dramatic decline in revenues from both the individual and corporate income taxes. The State also began diverting 1/15th of the gross individual tax revenue into two special funds to pay for education and human services spending outside the General Funds budget in February 2015. Despite overall revenue losses from these major changes, the actual wage base in the State has grown over the last five years.

The following table shows the changes in income taxes from FY2013 to FY2017 including the gross receipts for the original rates prior to the FY2011 tax increase, the amounts due to the increased rates, diversions and net General Fund revenue.

Changes in the Refund Fund transfers shown above have been caused by different diversion percentages set into law annually by the General Assembly. As discussed in the FY2017 Budget Roadmap, the Refund Fund diversion rates in FY2016 were set by a statutory formula that the Illinois Department of Revenue anticipates is too low and could create a backlog of unpaid refunds. The current rates are 9.75% for individual income taxes and 15.2% for corporate income taxes. To prevent a backlog of tax refunds in FY2016 the rates would need to increase to 10.2% for individual taxes and 17.3% for corporate taxes, which would reduce the net revenues available to support General Funds spending.

Corporate income taxes have also fluctuated over the past five years due to the tax policy changes surrounding net operating losses. From FY2013 until halfway through FY2015 the State capped the amount of operating losses that a company could credit towards its tax liabilities at $100,000. The expiration of the cap likely has led to a reduction in taxes owed by corporations in Illinois.

The underlying growth in General Funds revenue from sales taxes is much easier to perceive as the tax base, rate and diversions have remained relatively unchanged over the last five years. Sales taxes are collected at a rate of 6.25%, of which 5.0 percentage points is the State’s portion and 1.25 percentage points are passed on to county and local governments. 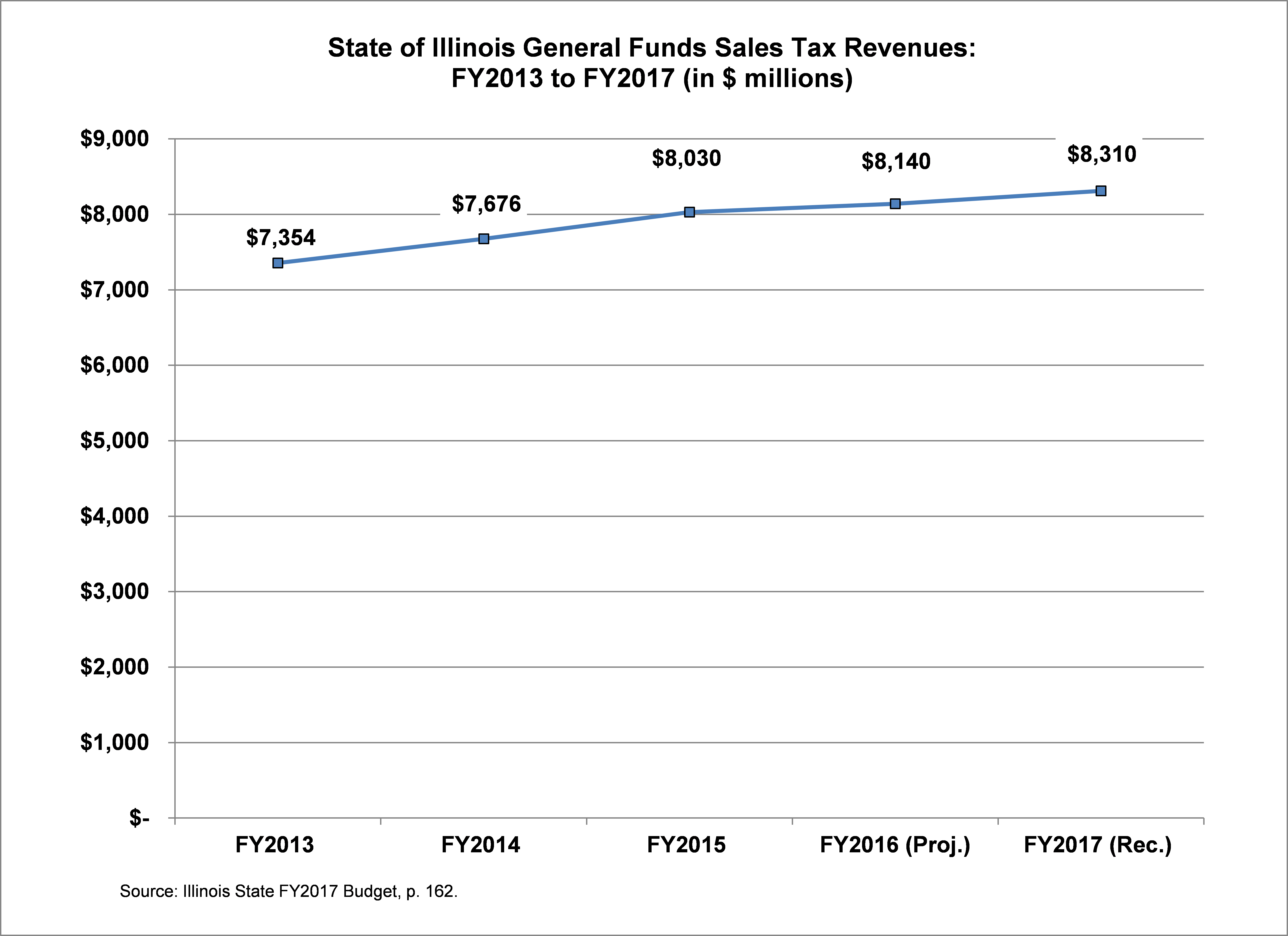 The Governor’s FY2017 budget warns that although this growth in sales taxes has been a positive for the last several years, it may not be sustainable. According to the budget document, pent up demand from large purchases put off during the recession has now likely been met. The State also expects motor fuel prices and demand to continue to drop, which produces a large portion of the State’s sales tax. These factors combined with a projected 20% likelihood of another recession in the first half of 2017 lead to a pessimistic outlook for continued sales tax revenue growth.

A larger increase in General Funds revenue is included in the Governor’s recommended budget compared to the FY2017 maintenance budget. The Governor recommends including certain one-time resources, which leads to General Funds revenue totaling $32.8 billion, or $1.1 billion more than FY2016. The  recommended budget includes spending down the entire balance of the State’s Budget Stabilization Fund totaling $275 million in FY2017 and counts on funds from the sale of the James R. Thompson Center totaling $200 million to be available to support operating expenses. These one-time revenues would not be part of the State’s ongoing tax base and only available for spending in FY2017.

Despite these positive revenue growth projections from FY2016 to FY2017, the State’s massive deficits in both years far outweigh the increases in revenue.

In FY2016, General Funds revenues declined to the lowest point in the last ten years due to the reduced income tax rates, which declined to 3.75% from 5.0% for individuals and 5.25% from 7.0% for corporations on January 1, 2015. The State also collects a personal property replacement tax of 2.5 percentage points on corporate income that is passed on to local governments, which made the effective corporate income tax rate 9.5% during the temporary rates and currently 7.75%.

The income tax rate reduction led to a General Funds revenue decline of $5.1 billion in FY2016 from FY2014 the last full year of the higher tax rates prior to the reduction. This loss of revenue has led to an expected operating shortfall in FY2016 totaling $4.4 billion.

As previously discussed here, the State faces a $6.6 billion deficit in FY2017 based on the maintenance budget. Even with the additional revenues and other reductions, the Governor’s recommended budget includes a $3.5 billion operating deficit.

The following chart shows the change in revenues and expenditures from FY2015 to the FY2017 maintenance budget and the Governor’s recommended FY2017 budget. 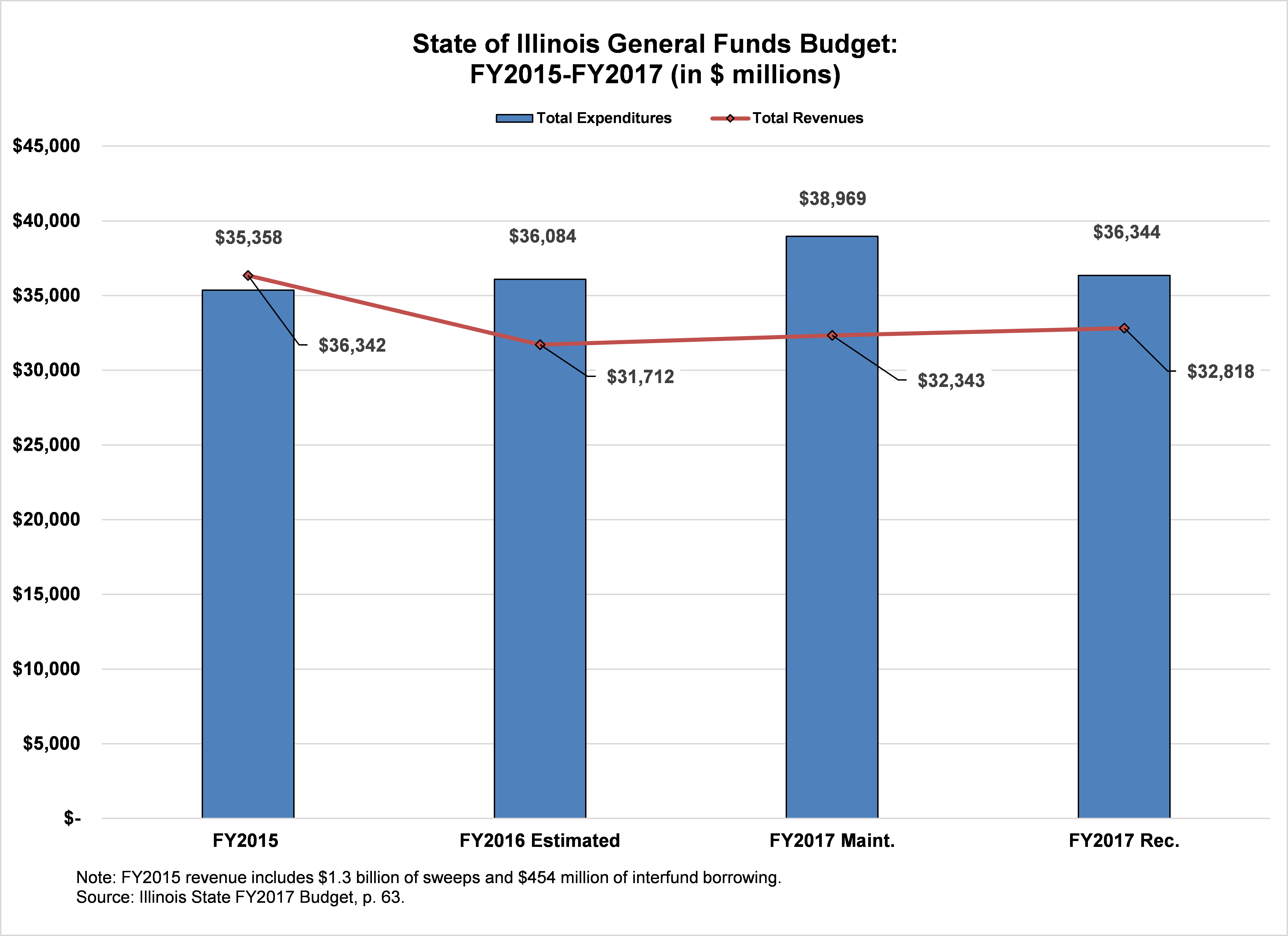 For the State to close the $6.6 billion operating gap in the FY2017 maintenance budget through tax revenue produced by economic activity alone, revenues would need to increase by an additional 20.5%. Even after accounting for the spending reductions and one-time revenues recommended by the Governor, to close the remaining $3.5 billion operating deficit in FY2017, annual General Funds revenue from ongoing sources would need to grow by an additional 10.9%.

This level of growth in the underlying economy would be staggering and well beyond any reasonable economic projections for the State or national economy.

Growth of this size in the State’s tax revenues has only ever been attributable to a change in rates, not underlying economic growth. It should also be noted that even if underlying improvement of this magnitude was possible it would only balance the operating budget in FY2017 and additional resources would still be necessary to address the $9.3 billion backlog of unpaid bills estimated for the end of FY2016.