Two of the three major rating agencies have cut the State of Illinois’ bond ratings due to its ongoing budget crisis and worsening financial condition. These downgrades make Illinois the only state credit currently rated below the ‘A’ category and signal a weakened capacity for the government to meet its financial obligations.

Both downgrades come on the heels of the announcement by the State Comptroller that due to year-end spending pressures and lower revenues, Illinois would be delaying contributions to the State’s pension funds in November, and possibly in December.

Fitch Ratings was the first agency to take action, downgrading Illinois to BBB+ from A- on October 19, 2015. This marked the seventh downgrade of Illinois’ General Obligation Bond rating by Fitch in the last five years.

The press release accompanying the downgrade from Fitch attributed the action directly to the State’s budget impasse and liquidity issues despite a growing economy in the State.

“The downgrade reflects the continued deterioration of the state's financial flexibility during its extended budget impasse. Illinois's inability to balance its operations, eliminate accumulated liabilities, and grow reserves during a period of economic expansion leaves it far more vulnerable to the next economic downturn,” stated Fitch’s analysis.

Although the rating is now below the ‘A’ level, the credit is still considered investment grade and three levels above speculative, or junk status. The outlook on Illinois’ credit from Fitch is listed as stable, indicating that another downgrade is not likely in the near term.

Moody’s Investors Service also lowered its rating on Illinois’ General Obligation Bonds to Baa1 from A3 on October 22, 2015. Using a similar rationale, Moody’s cited the State’s lack of a budget and deteriorating finances for taking the ratings action. This was the sixth downgrade of Illinois by Moody’s over the last five years. Illinois’ outlook from Moody’s remains negative, indicating the possibility of further downgrades if nothing is done to address the budget crisis.

“The state's negative outlook is consistent with the potential for additional credit weakening following this year's extended budget impasse,” stated Moody’s analysis. “Further deterioration in key measures, such as the state's unfunded pension liabilities and amount of unpaid bills, would put pressure on the state's GO and related ratings.”

Prior to the downgrade, Illinois stood alone with New Jersey as the only single ‘A’ rated state credits. More than half of the remaining states are rated ‘Aa’ and 15 states have the highest level of ‘Aaa’ rating from Moody’s.

The following chart shows the dispersal of Moody’s ratings for all 50 states and the specific enumerated grading for a few key states. Moody’s ratings employ a number grade within each ratings level from ‘Aa’ through ‘Caa,’ 1 being the highest credit and 3 the lowest. 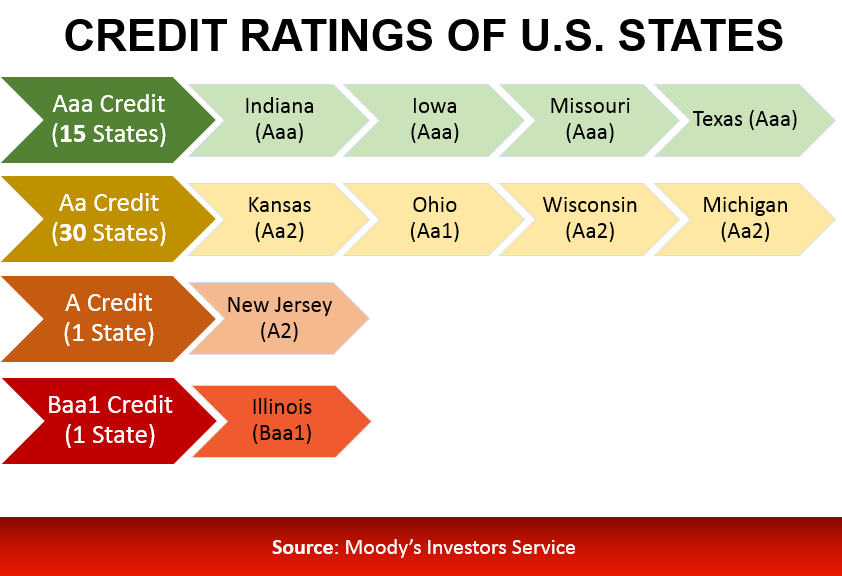 The third prominent ratings agency, Standard and Poor’s, continues to rate Illinois A- with a negative outlook.

Lower bond ratings increase the State’s cost of borrowing above other better rated governments. Illinois has not issued General Obligation Bonds since April 2014. Although the Governor’s proposed FY2016 budget projected a sale of $250 million of capital purpose bonds in FY2015, the State did not go into the market before the fiscal year ended on June 30. The recommended budget proposed the sale of an additional $1.1 billion in bonds in FY2016, but the State has not indicated when these bonds might be sold.

Currently, Illinois has $26.8 billion in outstanding General Obligation Bonds that will cost a total of $13.9 billion in interest as the debt is repaid through 2039.

Both downgrades also effect several other types of bonds issued by the State.

Moody’s lowered its ratings to Baa1 from A3 on the Build Illinois Bonds, which are backed by a portion of the State’s sales tax receipts. It also cut the State's ratings to Baa2 from Baa1 on bonds subject to appropriation, which are issued by the Metropolitan Pier and Exposition Authority and for the State's Civic Center program. The outlook for all of these credits was also held at negative.

Earlier this fall, the Metropolitan Pier & Exposition Authority received a quadruple downgrade from Fitch from AA- to BBB+ when the State failed to appropriate the funds needed to make its debt service payments.