Surveys show that Americans are divided in their views of the Affordable Care Act. With the incoming administration in Washington vowing to dismantle the federal healthcare law, this blog post examines Illinois’ expansion of the Medicaid program under the act.

Medicaid expansion was a key feature of the Affordable Care Act (ACA), designed to reduce the number of people without health insurance. While much of the debate about the 2010 law has focused on its insurance marketplaces, the Medicaid expansion portion of the law has led to a similar increase in healthcare coverage.

More than 11.5 million individuals have chosen marketplace insurance plans for 2017. As of March 2016, 11.1 million enrollees were newly eligible for Medicaid due to the ACA, accounting for about 15% of the 74.1 million Medicaid recipients across the United States.

Medicaid is a joint federal-state program that pays for healthcare for certain categories of low income citizens. The ACA expanded Medicaid to the major low income population that generally had not been covered: non-elderly, non-disabled adults without dependent children. Beginning in January 2014, the ACA extended Medicaid coverage to such adults with incomes up to 138% of the federal poverty level (meaning that a single person could have income up to $16,394 in 2016).

The expansion of Medicaid eligibility became optional for states after a ruling in 2012 by the U.S. Supreme Court. Illinois is among 32 states (including the District of Columbia) that expanded Medicaid coverage. The Illinois General Assembly approved Illinois’ participation in the expansion in 2013.

As in many other states that expanded Medicaid, Illinois vastly underestimated the number of newly eligible recipients who would sign up. As discussed here, the State initially projected that 342,000 newly eligible individuals would enroll by the end of 2017. But as of June 2016, the number had reached more than 637,000, or 20% of the 3.2 million total Medicaid recipients in Illinois.

New recipients have generally been able to see doctors more regularly and increased their use of some services, including behavioral healthcare and preventive care, according to national studies. However, results have been mixed on whether healthcare providers have been able to meet the increased demand for care following expansion.

Until the beginning of 2017, the expansion did not add to the State of Illinois’ immense budgetary pressures. State Medicaid expenditures for historically covered populations are reimbursed by the federal government at a rate known as the Federal Medical Assistance Percentage (FMAP), which varies from 50% to nearly 75% depending on a state’s per capita income. Illinois’ current reimbursement rate is 51.3%.

But the federal government paid 100% of the cost for newly eligible Medicaid recipients through 2016. As a result, the Medicaid expansion has brought in billions of dollars in new federal funds for hospitals, clinics, pharmacies and other healthcare providers at no cost to the State.

The following table shows federal payments for newly eligible Medicaid recipients for State of Illinois fiscal years, which end on June 30. The total was $7.4 billion through September 2016 and is likely to exceed $8 billion by December 2016. In FY2016 the $3.2 billion in ACA reimbursements represented 30.5% of total federal Medicaid payments of $10.5 billion. 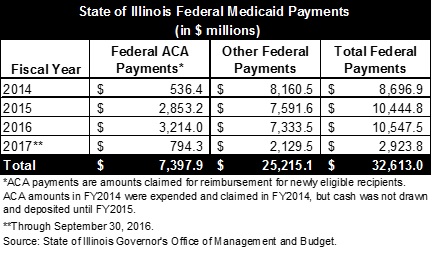 For the entire United States, federal ACA Medicaid payments totaled $79.6 billion from January 2014 through September 2015, the latest figures available. That represented 14.3% of the total $555.8 billion in federal Medicaid reimbursements during the period.

The ACA Medicaid expansion significantly improved the finances of Cook County’s large public health system and allowed the County to reduce its tax allocation to the system. As discussed in this report, many adults who were previously treated free of charge at the Cook County Health and Hospitals System were covered by Medicaid as a result of the ACA, leading to a dramatic reduction in the cost of uncompensated care.

Due to the increase in Medicaid coverage, the Cook County health system is now seeing more insured patients than uninsured patients. The County has been particularly active in enrolling detainees at Cook County Jail in Medicaid, so they will have access to medical services after being released.

The impact of repealing the ACA on Cook County and the rest of the State of Illinois depends on whether there is a replacement plan, what happens to federal Medicaid expansion funding and whether other major changes to the Medicaid program are put in place. Under Illinois law, the Medicaid expansion must end three months after the federal reimbursement rate is reduced to less than 90%.

The U.S. Senate took the first major step toward repealing the ACA on January 12 by approving a budget resolution that sets the stage for a special kind of legislation that can be used to overturn parts of the law. This legislation, known as a reconciliation bill, can pass the Republican-controlled Senate with a simple majority after limited debate, restricting the power of the Democratic minority to block it. Congress previously used the process in 2015 to eliminate parts of the ACA, but President Obama vetoed the bill in January 2016.