On March 26, 2014, Governor Pat Quinn presented an FY2015 budget proposal for the State of Illinois that avoids a fiscal cliff by retaining temporary income tax increases that were scheduled to be phased out beginning in January 2015.

The Governor’s recommended budget also significantly increases the property tax credit for homeowners on State income taxes. In order to balance the budget and pay down a portion of the State’s backlog of unpaid bills in FY2015, Governor Quinn’s proposal requires the State to borrow $650 million from other state funds, which must be paid back in future years.

In addition to the recommended FY2015 budget, Governor Quinn presented a “not recommended budget” for FY2015 that did not include extending the tax rate increases. As discussed here, the Governor is required to provide a budget proposal that only includes enacted revenue sources. 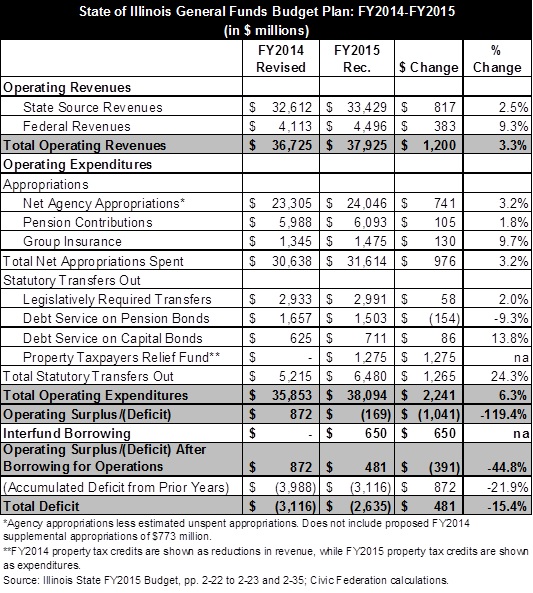 General Funds expenditures in the recommended FY2015 budget increase by $2.2 billion, or 6.3%, to $38.1 billion from $35.9 billion in FY2014. Net agency appropriations—not including pension contributions or group insurance payments—increase by $741 million, or 3.2%. The FY2015 budget does not include any savings from pension reform legislation that was enacted in December 2013. The pension law is not expected to have an impact on the budget until FY2016 at the earliest due to legal challenges.

With expenditures exceeding revenues, the Governor’s FY2015 budget proposal results in an initial operating deficit of $169 million. The deficit would be covered by borrowing $650 million from State accounts outside of the General Funds, a practice known as interfund borrowing. Depending on which accounts are tapped, the State might have to pay interest charges. As discussed here, an interfund borrowing program in FY2011 required repayment within 18 months of the initial loan.

After the $650 million in interfund borrowing, the recommended FY2015 budget shows an operating surplus of $481 million. The total deficit, which includes the accumulated deficit from prior years, declines to $2.6 billion.

The State funds its General Funds deficits by delaying payments and transfers to vendors, social service agencies, local governments and other State accounts. These bills and other payables are paid from the next year’s revenues.

The State also has other liabilities outside of the General Funds, known as Section 25 liabilities and consisting mainly of group health insurance claims and Medicaid bills, that can be paid from future appropriations. In addition, the State owes approximately $112 million in back wages to union employees as a result of a dispute over cancelled raises.

The next table shows the projected backlog of unpaid bills at the end of FY2014 and FY2015. It should be noted that the table is based on the assumption that the Governor’s proposed FY2014 supplemental appropriations of $773 million are not enacted. The proposed additional appropriations consist mainly of back wages owed to union members and $522 million of group insurance expenses. These additional costs are reflected in the table as unpaid bills. 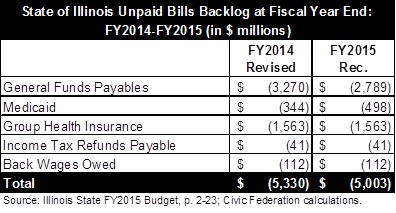 In addition to the FY2015 budget, the Governor’s Office also issued a five-year budget plan through FY2019. As discussed here, a long-term financial plan is considered a best practice by public finance experts. Although it lacks details, the Governor’s five-year plan shows the growth in revenues if the tax rate increases were made permanent and spending priorities for the future.

It remains to be seen whether the Governor’s FY2015 budget plan will be approved by the General Assembly. As discussed here, the General Assembly moved forward with its budget process after Governor Quinn’s budget presentation was delayed from February 19 to March 26. The legislature agreed on a General Funds revenue estimate for FY2015 that reflected the scheduled roll back of the income tax rates.

After the Governor’s budget address, the leaders of the House and Senate expressed support for extending the tax rate increases. House Speaker Michael Madigan said he demanded property tax relief as part of the proposal.